A broader view of poverty in East Asia and Pacific 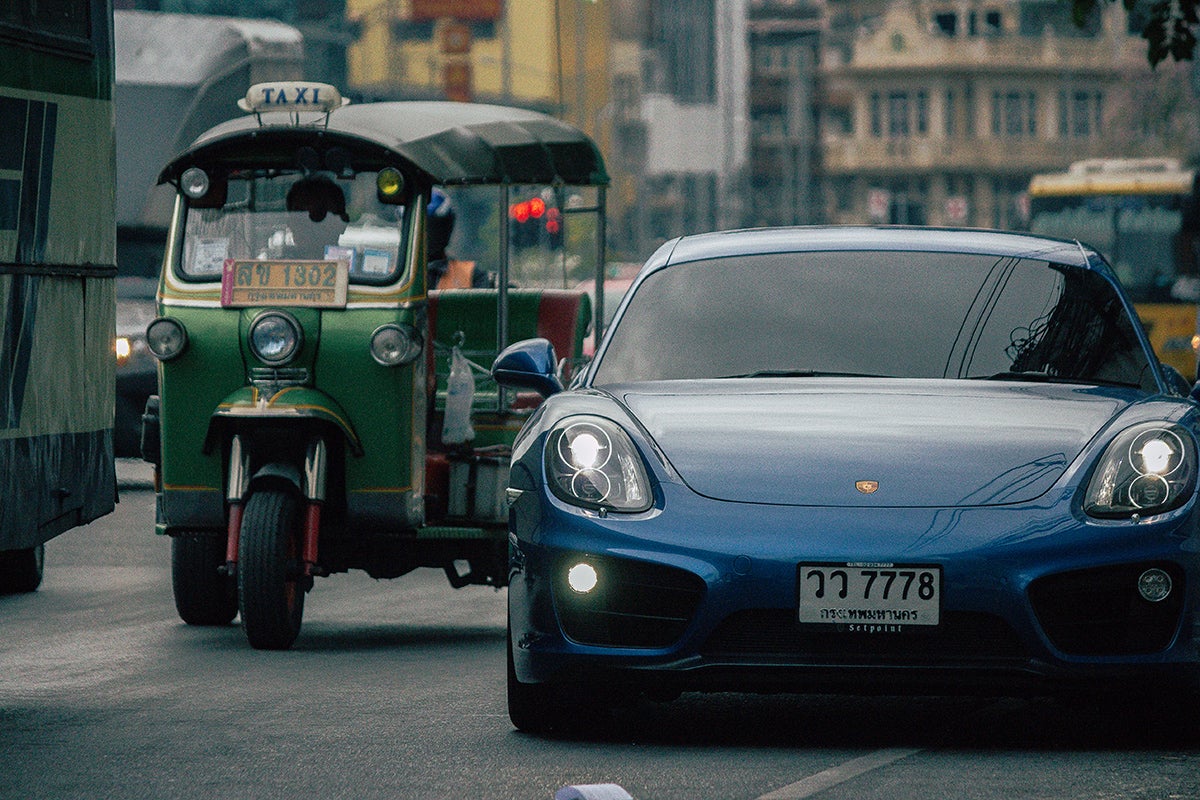 Economic progress in East Asia and Pacific (EAP) has greatly contributed to the global reduction of extreme poverty. The more prosperous countries in the region – China, Thailand, and Malaysia – now have poverty rates of less than 1 percent measured by the $1.90/day (2011 PPP) International Poverty Line.

Yet, many citizens in developing EAP would not believe that their societies are without poverty. Rising incomes and wealth over the past three decades have led to questions as to whether the $1.90 International Poverty Line is now too low to adequately capture whether or not someone is poor in the region. This concern is especially relevant for developing EAP, which is composed exclusively of lower-middle- and upper-middle-income countries. Conceptions of poverty and the standards of living to which people aspire are much higher than what is benchmarked by the International Poverty Line.

At the same time, poverty is a complex and multifaceted problem. In addition to monetary deprivation, individuals may suffer from lack of access to basic infrastructure, education, and other critical services. Piecing together the poverty puzzle means widening the ways in which we define and measure poverty, acknowledging that poverty is not one-dimensional nor solely monetary in nature.

New pieces of the poverty puzzle were introduced in the 2018 Poverty and Shared Prosperity flagship to complement the existing World Bank measures of poverty, aimed at meeting the twin goals of ending extreme poverty and boosting shared prosperity. These new pieces include higher poverty lines and a multidimensional poverty measure.


Half a billion people are not yet economically secure

Where the poverty threshold is set makes a tremendous difference in how policymakers think about who and how many people are poor. Monitoring poverty at higher poverty lines is becoming increasingly important to ensure an appropriate policy response for the poor living in countries with higher costs of living and rising aspirations.

In developing EAP in 2018, an estimated 30 million people lived on less than $1.90 a day, while 168 million lived on less than $3.20 a day, and 538 million on less than $5.50 a day (Figure 1). Though $5.50 is slightly less than three times higher than the International poverty line ($1.90 a day), the number of poor at this higher line is almost eighteen times more than the number of extreme poor because such a large proportion of the population lives between $1.90/day and $5.50/day (Figure 2). Based on definitions of economic classes discussed in the  EAP Riding the Wave flagship, the economically secure are those that live on between $5.50 to $15 a day (2011 PPP).

Differences in the number of poor using the different thresholds are most significant among EAP’s most populous countries. For example, almost 10 million Chinese were poor in 2015 as measured by the IPL, compared to 373 million using the $5.50 poverty line. 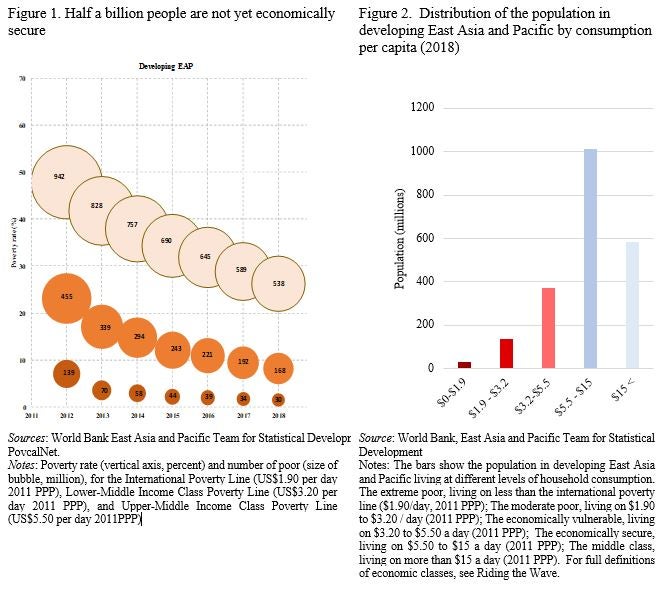 Developing EAP is a diverse region, with some pockets still facing daunting challenges

While many countries in EAP have made good progress in tackling poverty, it is important to bear in mind that developing EAP is a diverse region and includes sub-regions that still face daunting poverty reduction challenges. Residents of EAP live at all levels of economic well-being, stability, and environmental fragility. Eight out of 36 countries in fragile, conflict, or violent (FCV) settings worldwide are located in EAP.

Large variation in poverty rates exists both within and across countries. Across 78 sub-regions, the $3.20/day poverty rate ranges from 0 percent in Bangkok, Thailand (2017) to 84.5 percent in Oecussi, Timor-Leste (2014) (Figure 3). In non-monetary poverty, material deprivations in access to water and sanitation are also higher in rural areas.  Developing EAP’s many mountainous regions and remote islands may exacerbate unequal access to services. A more granular view of non-monetary poverty has implications for policy by revealing the types of deprivations or overall disadvantage. 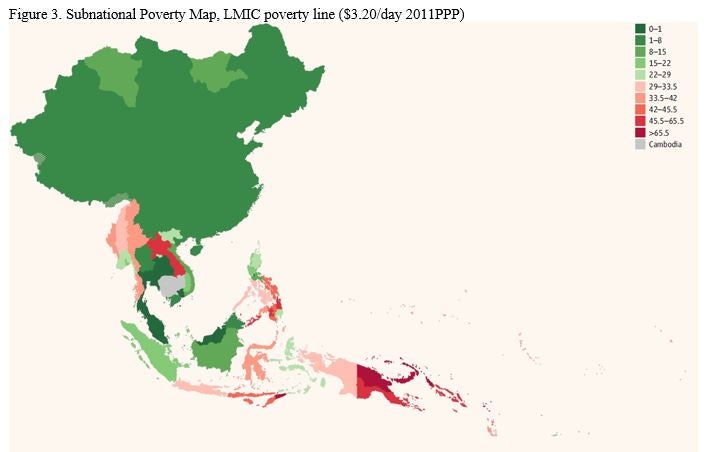 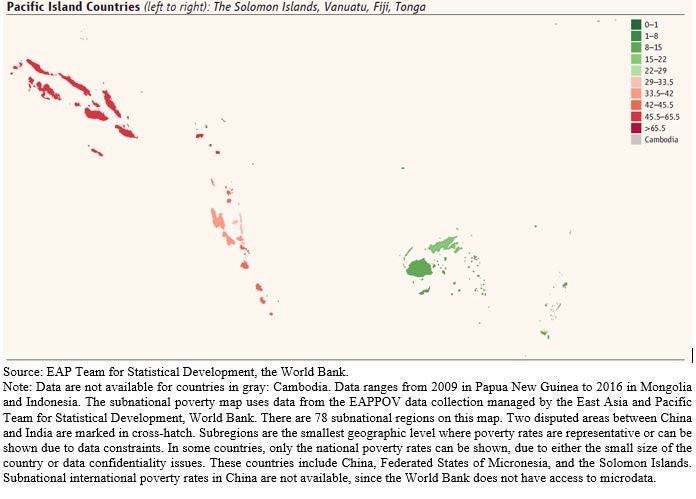 Our conceptualization of what poverty is in developing East Asia and Pacific should adapt as incomes and aspirations rise, and countries work on expanding their middle-class societies and transitioning to high-income status. As societies prosper, higher standards for monitoring refer not only to higher poverty lines to account for higher costs of living in wealthier societies but also to accessible and high-quality public services . A broader view of poverty, including higher poverty lines and multidimensional poverty measures, reveals there is still much work to be done in middle-income countries, even though extreme poverty is now less prevalent.

This view helps to enhance policy dialogue and craft policies that are more relevant and targeted. A larger suite of global measures, grounded in tools that countries already use to monitor progress, can facilitate enhanced dialogue by offering a rich set of comparable instruments for countries to assess their performance. To facilitate relevant and targeted policies, new and existing indicators should be monitored in a more disaggregated manner, both geographically as well as at the individual level. When this is done, pockets of poor are more noticeable, even in relatively well-off countries.