As an upper-middle income country with a majority of its population living in cities, Malaysia is situated among the countries that prove urbanization is key to achieving high-income status. Asking “How can we benefit further from urbanization?” Malaysian policymakers have identified competitive cities as a game changer in the 11th Malaysia Plan. To this end, the World Bank has worked with the government to better understand issues of urbanization and formulate strategies for strengthening the role of cities through the report, “Achieving a System of Competitive Cities in Malaysia.”

Its larger cities are characterized by urban sprawl, particularly in Kuala Lumpur, where population density is low for an Asian metropolis. This inefficient urban form results in high transport costs and negative environmental impacts. This is matched by low economic density, indicating Malaysia’s cities can do better in maximizing the economic benefits from urban agglomeration. 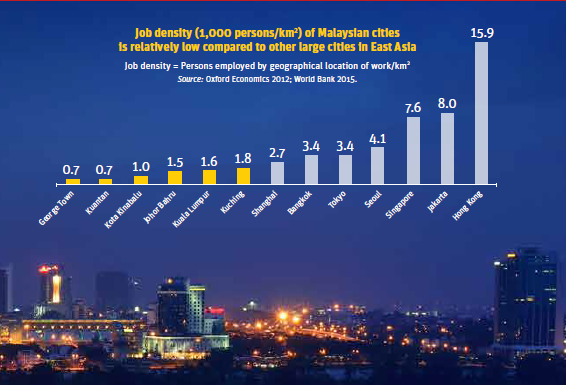 A second challenge hampering Malaysia’s cities is the highly centralized approach to urban management and service delivery, a system that impedes the local level, and obstructs service delivery and effective implementation of urban and spatial plans.

Third is a growing recognition of the importance of promoting social inclusion to ensure that the benefits of urbanization are widely shared.

Thus, a set of key recommendations have been identified to increase the competitiveness of Malaysia’s cities:

Many of the changes identified involve shifting from existing norms and require sustained efforts and political will to implement. The benefits for Malaysia would far outweigh the costs as it offers opportunities to harness the benefits of urbanization and achieve a system of competitive, sustainable and inclusive cities.
Topics
Jobs & Development
Urban Development
Countries
Malaysia
Regions
East Asia and Pacific