On Display: The Highs and Lows of Indonesia’s Urbanization


Last weekend I visited Bogor, 60 km (37 miles) outside of Jakarta. It only took an hour and fifteen minutes to leave the city. Due to traffic caused by heavy rains, the drive back was almost three times as long.
Elsewhere in Indonesia’s capital, neighborhoods were flooding. Cars were trapped overnight in basement parking lots of the cafes and restaurants of Kemang, a chic neighborhood where a poorly designed drainage system and lack of green space causes recurrent flooding.

Such is life in fast-growing Jakarta, a bustling metropolitan area that looks set to displace Tokyo in 2028 as Asia’s largest city by population.

Recently, in partnership with Harvard University’s City Form Lab, we held an exhibit at the lobby of the Indonesia Stock Exchange Building, called Indonesia’s Urban Story. It was based on a related publication which illustrates the challenges facing cities across Indonesia. 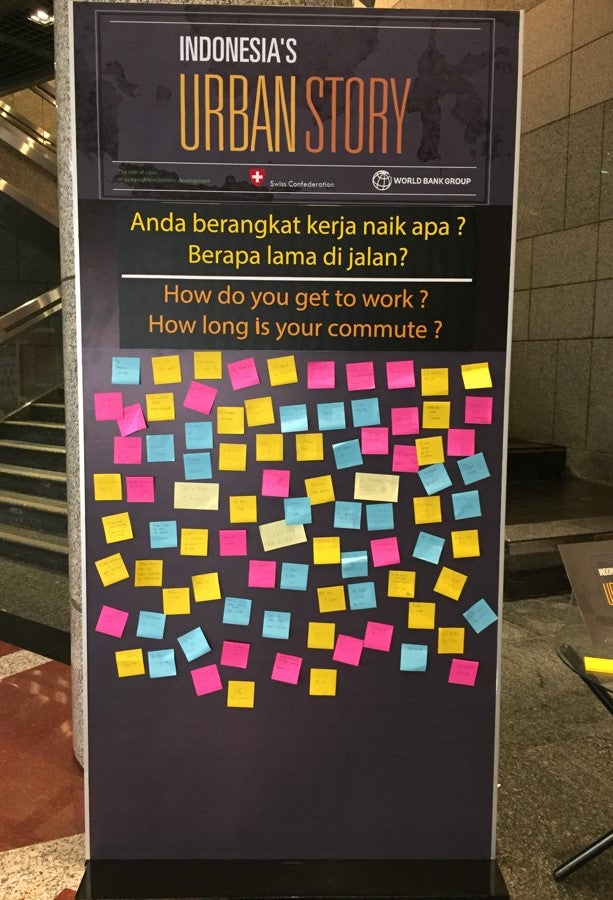 Every day, viewers of the exhibit were invited to answer a different question about various aspects of urban life.

The answers led to a downpour of grievances – and aspirations:

Question: How do you get to work? How long is your commute?

Question: What do you like most about living in this city? Dislike most?
Shopping malls, traffic
Easy access to facilities, pollution
Better Internet, traffic
24-hour activity, traffic
A modern lifestyle, pollution

Question: What would you like to see in your city in the future?
A Jakarta that is cleaner and greener
A friendly city, especially for kids
More public space
A clean river for tourism
Lighter traffic
These answers capture common frustrations and complaints about the city’s inefficiencies. But they also express an appreciation for the opportunities found in cities, along with hope that those inefficiencies can and will be addressed.

Traffic and flooding are treated as common occurrences in Jakarta, yet the impact of congestion and the risks posed by natural disasters are substantial. Congestion alone is costing Metropolitan Jakarta $3 billion annually. Some 40% of Jakarta is below sea level and faces serious flooding risks. These issues are not going to go away on their own.

Indonesia is urbanizing at an extraordinary rate. Today a little bit over half of Indonesia’s population live in cities. In less than ten years, by 2025, that ratio will be 68%. Two-thirds of all Indonesians will be city residents.
Now consider the cities they will live in. Today, only 48% of urban households have access to safe water. Only 11 cities have sewerage coverage.  Only 2% of city residents have access to centralized sanitation systems.

Will this infrastructure improve as cities expand?  In order to respond to growing cities, local governments must prioritize developing infrastructure in their municipalities, in order to directly address issues of congestion, pollution, poor service delivery and disaster risk.

Recently world leaders convened in Quito, Ecuador, for Habitat III, the United Nations conference on Housing and Sustainable Urban development. As they discussed a global ‘New Urban Agenda’ for the projected 6 billion people living in cities by the year 2050, well-managed urbanization will be key to addressing crucial global challenges such as poverty and climate change.

Indonesia is not alone in the urban challenges that it faces, and will have the support of the global community as it strives to develop sustainable cities and take full advantage of the opportunities available through urbanization.

Indonesia’s Urban Story is the first example of the efforts of the recently established Indonesia Sustainable Urbanization (IDSUN) Multi-Donor Trust Fund. Over the next three years, IDSUN, with a $13.4 million contribution from the Swiss State Secretariat for Economic Affairs, will support the Government of Indonesia in pursuing a platform for sustainable urbanization and coordinating national programs on slum upgrading and affordable housing, urban transport, urban water supply and sanitation, solid waste, and drainage and flood risk management.