How to bridge the gap in Indonesia's inequality in internet access

The Internet is one of the greatest innovations of our time and holds great potential for creating a more prosperous and equal society. It enables small businesses to access worldwide markets. It is a learning resource that allows pupils in the poorest and most remote locations to access the same information as children in wealthier regions. It provides opportunities for rural households to obtain digital health services wherever they are. It is a virtually free “news agency,” allowing individuals to share information with many others, and enables free speech.

However, not everybody has access to the Internet. In Indonesia in 2019, 94 million adults were unable to access the Internet on a mobile device and even fewer people had access to fixed broadband internet. Nearly 80 percent of those not connected reside in non-metro rural areas  of Sumatera, Java and Bali islands, which are the country’s three most populous islands. On top of that, 60 to 70 percent of Indonesians living in the country’s eastern region are inadequately connected due to variable quality of service.

This divide between Indonesia’s digital haves and have-nots reinforces the country’s socio-economic disparities. As the World Bank’s Beyond Unicorn report shows, young adults are ten times more likely to have mobile internet access than senior citizens. At the same time, those with tertiary education are five times more likely to connect than those whose education is limited to junior secondary attainment or less. In addition, individuals from low-income families are three times less likely to have Internet access than children born in the most prosperous families.

These disparities will hold back economic growth and will widen the social gap as opportunities are seized by those who have Internet access but not those who may need them most. This situation is aggravated by conditions beyond individual control, such as where people live or their families’ economic circumstances. This will ultimately create costs for the society in terms of foregone human capital and loss of economic potential. Breaking down barriers to mobile internet connectivity in Indonesia will be crucial to delivering the digital economy's benefits for all. Nearly half of Indonesian adults did not own an internet-enabled phone (e.g., smartphone) before the COVID-19 pandemic, creating a fundamental barrier to going online. These devices are still unaffordable for many people,  even though prices for mobile phones have dropped sharply over the last decades. Buying the least expensive internet-enabled phone would cost the equivalent of one fifth of the monthly expenditures of a low-income person. Compounding this challenge, prices for mobile devices can be dramatically higher in rural and remote areas, where most of the unconnected people reside. In addition to price, limited familiarity with digital platforms and services is a constraint for many. 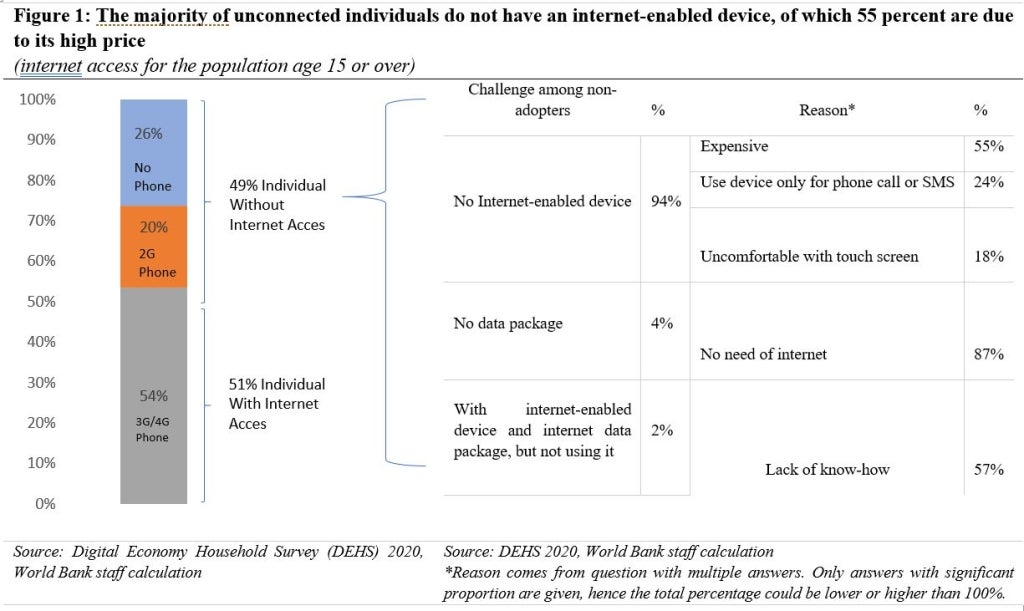 The Beyond Unicorn report identifies several steps that could help bridge the digital divide. First, Indonesian mobile network operators need better access to spectrum bands, which are necessary to provide network services.  While inefficiencies in spectrum allocation limit coverage expansion and contribute to network congestion, the unavailability of specific high-frequency capacity bands hinders the deployment of a more efficient 5G mobile technology. While the regulations derived from the Omnibus Law No. 11/2020 on post, telecommunication and broadcast already impose a mandatory two-year plan to convert analog television into digital to preserve the spectrum for the 4G network, the government could also consider releasing the band previously used for satellite television to relieve network congestion in urban areas.

Second, Indonesia needs to ensure affordable access to information and communication technology (ICT) devices, such as computers and internet-enabled phones, especially in remote and rural locations . By improving access to the global digital marketplace and expanding road access to remote villages, Indonesia can reduce price disparities between urban and rural markets that arise from expensive logistic or travel costs. In addition, specific educational programs for low-income families can ensure that children are able to learn digital skills to avoid intergenerational transmission of "digital poverty" and lack of digital opportunities.

Finally, improving digital skills among Indonesia's population will remain a key priority for narrowing the digital divide.  For a senior citizen or the poorest individuals, the probability of accessing the Internet increases dramatically with improved education attainment, emphasizing the linkage between education and technological adoption. This shows that to fully reap the promise of digital opportunity, Indonesia needs to build an educational system that not only uses digital technologies, but also promotes digital skills and productive usage of the Internet among all levels of society. The formal educational system as well as community or lifelong learning programs need to offer basic digital literacy, especially for the older generation that is still mostly left unconnected.

This blog post is part of a series of blogs discussing the digital divide in the context of broadband internet access, mobile internet access, digital economy and digital governance, relying on results of the Beyond Unicorn report.