How good are Filipinos with their finances?

Making ends meet is a challenge for many Filipinos, and not only for those who are poor.  A recent survey on financial capability and inclusion, conducted by the World Bank in collaboration with the Bangko Sentral ng Pilipinas (BSP), for the first time provides data on household financial behavior decisions and knowledge of financial concepts.

The survey results indicate that 55% of respondents in the Philippines report not having enough money to pay for food or basic necessities and 26% say that this is a regular occurrence. Estimates derived from the survey data indicate that about 23 million adults making financial decisions face this situation.

However, insufficient income is not the only story. Among other factors are providing financial help to others, overspending, unexpected expenditures due to illness or other emergencies, and lack of planning and budgeting. Among these options, the least likely to be selected is a failure to plan and budget – identified by 21%.

Only 60% of respondents said that they plan their expenditures or budget. Yet survey data analysis shows that those who plan their finances are more likely to have funds left after paying for the basics and are less likely to report that they borrowed beyond their means. Regardless of income, location, employment, and age, Filipinos who budget have greater control of their finances. 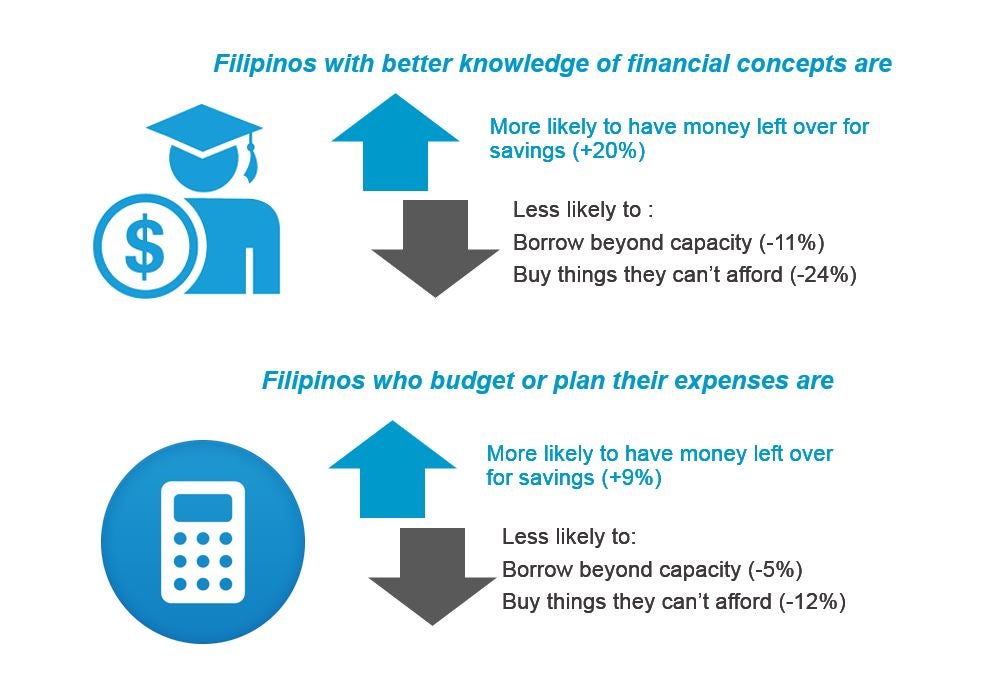 The survey also measured knowledge of basic financial concepts among Filipinos. As research in many other countries found, the general public’s ability to compute simple and compounded interest rates is far from universal. In the Philippines, 51% of the respondents correctly calculated simple interest rates and only 29% gave correct answers about compounded interest rates. At the same time, data analysis shows that those who had a better understanding of financial concepts were also able to better manage their finances regardless of the level of income and other socio-economic characteristics.

The recently launched Philippines National Strategy for Financial Inclusion recognized the importance of financial education and consumer protection. A number of agencies already have programs in place and a large number of private firms and NGOs are actively offering financial education programs. These new data provide a baseline to track progress in the level of financial capabilities of Filipinos.
Countries
Philippines
Regions
East Asia and Pacific Very well written blog. Need this since am trying to help filipinos get out from debt trap through Financial Literacy Program. Am doing training in urban areas regarding proper business management.
Cheers
Rollr