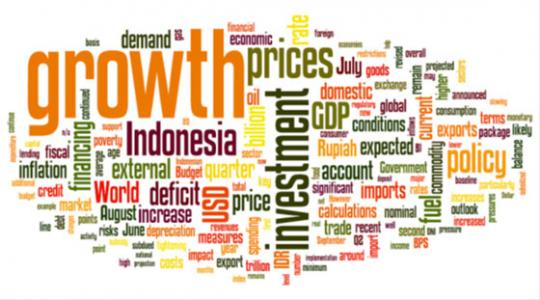 2013 has been a year of adjustment for Indonesia’s economy.  In the recent edition of the Indonesia Economic Quarterly report, the flagship publication of the World Bank Indonesia office, we asked the questions: what are the drivers of this adjustment and how should policy respond?

2013: a year of adjustment
Through early 2013, Indonesia’s economic performance remained robust, despite mounting pressures, notably from subdued demand and falling prices for many key export products, rising concerns over the direction of trade and investment policies, and, given taxing energy subsidies, ongoing challenges to improve the quality of government spending. This resilience reflected Indonesia’s key economic strengths, especially the growing domestic consumption base. Private consumption absorbs approximately 55 percent of total output in Indonesia - much more than in other countries more directly dependent on exports.  But other parts of the economy lagged.  Spending on machinery and equipment slowed down markedly since mid-2012, and inventory levels increased.  Price growth slowed overall, showing weaker demand.

Then, in May, Indonesia joined other emerging economies in becoming affected by mounting speculation over the winding down of the US Federal Reserve’s quantitative easing (“tapering”).  Tightening global liquidity conditions highlighted Indonesia’s relatively high external financing requirements, arising from two sources. First, sizable external debt servicing costs.  Although external debt is modest relative to the size of Indonesia’s economy (at under 30 per cent of GDP), servicing this debt (totalling USD 257 billion as of August 2013), still generates significant foreign currency demand. The large current account balance deficit – USD 8.4 billion, or 3.8 percent of GDP, in the third quarter – also increased financing need, at the very time when external financial conditions became tighter.

These factors – and weaker commodity prices – have taken their toll on Indonesia’s economic indicators. The Rupiah depreciated by 17 percent against the US Dollar in the third quarter, and Bank Indonesia has raised policy rates by 175 basis points since June. The Government raised subsidized fuel prices by an average of 33 percent in June – the first increase for petrol and diesel since 2005 (barring that in 2008, which was later unwound). These adjustments are positive – they keep Indonesia’s economy on a sound footing, particularly the external balances.  Exchange rate depreciation, if it lowers labor costs, makes Indonesia more competitive regionally, and dampens import demand.  Higher fuel prices have curbed spending, and associated financing, on inefficient energy subsidies – imagine the alternative of no price changes.

Yet we realize that adjustments are not costless, take effect with lags, and bring on risks. Growth is likely to slow – we project that GDP growth will decline from 6.2 percent in 2012 to 5.6 percent in 2013, and to 5.3 percent in 2014. These are respectable numbers compared to those of developed economies, but a marked step down from the higher rates to which Indonesia has become accustomed. And localized stresses prompted by over-exposed firms can have a ripple effect on confidence.

The good news? Indonesia’s fiscal and monetary policy framework has indeed proved responsive to the change in economic conditions – although critics point out, perhaps not quite as proactively as some had hoped.  Indonesia has been a leader in lining up contingent fiscal financing facilities, including from the World Bank, as well as bilateral foreign currency swap lines, for use in the event of a severe financing crunch.

The real test may be whether Indonesia can now follow through with clear, credible measures to carry out the third critical role of policy: lifting the sustainable growth rate, to safeguard significant gains made in poverty reduction and to minimize Indonesia’s vulnerabilities to the vagaries of the global economy. The Government’s policy packages contain some hopeful signs. But implementation remains key and significant uncertainties remain. In particular, there is concern about the long-awaited revision of sectoral foreign investment limits (the “negative” list). We welcome that debate.