2013: The challenge of public finance during a mining boom 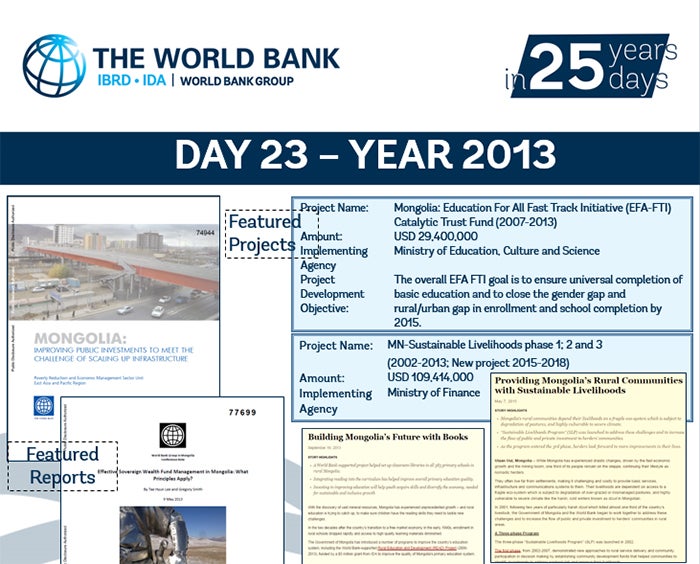 Continuing our series celebrating the 25 years that Mongolia has been a member of the World Bank, today we look at 2013.  Foreign direct investment (FDI) fell below 20% of GDP, down from the heights around 50% of GDP a few years earlier. Growth, however, was still in double-digit territory and inflation was in single digits.

With the boom well underway, a report examined how to meet the challenge of scaling up infrastructure.  In a blog summarizing the study, one co-author was blunt:  “Financed by the mining boom, government spending on new infrastructure in Mongolia has increased 35-fold in the past 10 years. But you would not know this from driving the pot holed streets of Ulaanbaatar or inhaling the smog filled air of the city, particularly in the ger areas. … [The study] examines why this increased spending is not resulting in equivalent benefits for the citizens of Mongolia in terms of better roads, efficient and clean heating, and improved water and sanitation services.” The study pointed to poor project planning and implementation, and suggested ways to improve.

A 2013 study on the principles of an efficient sovereign wealth fund was published.  As one author asked in his blog: Mongolia needs better roads, schools and hospitals: so why all this talk about saving for the future?  Arguing that the government should run a fiscal surplus in good years, so that saved money can be used in the tough years to avoid painful cuts to important areas of expenditure like education, health and infrastructure. “Without political backing, which in turn reflects public opinion in Mongolia, saving cannot happen. Mongolia has a stabilization account and a Fiscal Stability Law limiting budget deficits. But it requires saving into the account and some improvements to the design. There is also no merit in bypassing the stability law and procedures by spending money off-budget, as witnessed in 2012 and now in 2013, as it prevents the above mentioned challenges from being met.”

Although growth was a robust 11.6% in 2013, the blog post summarizing the study cautioned that “Mongolia has a history of boom and bust.” Citing the example of Chile: “During the period copper prices increased rapidly Chile saved off-shore and when copper prices fell at the height of the 2008 global financial crisis, Chile weathered the storm by spending funds saved in the good times. Expenditure on education, health and roads was largely maintained despite huge swings in mining revenues. Crucially Chile had public and political consensus behind their prudent approach.”  Such a consensus to save during the good times did not exist in Mongolia, and fiscal pressures during the bust period have proven to be challenging and painful.

A study on Ulaanbaatar City Finances sought to understand the inner workings of the city finance system in Ulaanbaatar and its districts. “It empirically analyzes the city’s revenue sources, expenditures in service provision, the legal framework governing them, and the budget reporting system. It identifies systemic issues that are compromising an efficient and equitable allocation of financial and fiscal resources for the provision of municipal services and urban infrastructure.”

With support from the Global Agriculture and Food Security Program (GAFSP) the Livestock Agricultural and Marketing Project (LAMP) sought “to improve rural livelihoods and food security in selected aimags and soums through investments in enhancing productivity, market access and diversification in livestock-based production systems.”  The project focused on “constraints in market access, price-quality relationships and livestock production (animal health, animal breeding, genetics and nutrition) that need to be treated in an integrated manner.”

The variegated analytical studies of 2013 included one on gender disparities in labor markets, and another on raising female labor force participation in the large scale mining sector.  A study on financial capability laid the groundwork for later support for a broader financial education strategy for Mongolia. And, in 2013 the governments of 12 countries endorsed a new global initiative to save the snow leopard and conserve the high mountain ecosystem on which they rely.

Next we look at 2014, when long-standing information-technology, education, and rural engagements started new chapters.

Prepared in collaboration with Taehyun Lee.