One small step for me, one giant leap for girls in Papua New Guinea 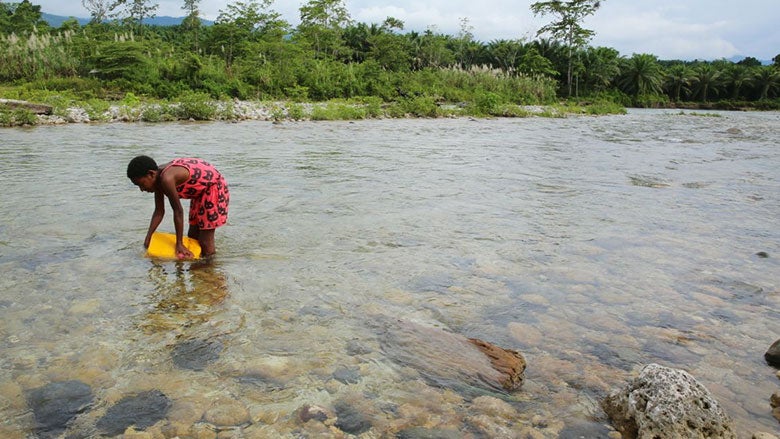 In most rural communities in Papua New Guinea (PNG), a daily routine for women and girls involves collecting clean drinking water for their families. Whether it means a strenuous walk down a steep hill in the highlands or walking for hours during the dry season to the nearest water source, this daily task is familiar to a lot of us.

A few months ago, I travelled to Bialla, a small district town in West New Britain Province, in the north-eastern end of PNG after the launch of the new Water & Sanitation Development Project.

Driving into the township, it’s obvious why access to clean tapped water is so important: the main road was filled with women, and children of school age, carrying huge water containers heading to the nearest river.
I met 13-year-old Rendela, who told me about Tiraua river that it was about an hour out of town. Like most young girls in Bialla, Rendela is responsible for collecting water for her family.

“The river is our only supply of clean drinking and cooking water during the dry season,” she told me.

Rendela attends Bialla Primary School, and said that on most days she is either late for class, or misses school completely, because of the lack of water at home or at school.

“We have half-day classes during the dry season,” said the school’s Headmistress, Anne Mokoi, who has been teaching at the school for the last 12 years. The school has two water catchments for collecting rain water which caters for over 700 students enrolled there.

“Absenteeism is very high, and we expect it during the dry season; especially among the girls,” she told me.

And the issues of access to clean running water and lack of proper sanitation is also starkly evident at the nearby Bialla Health Centre.

Dulcie, a young mother waiting in line at the Centre, told me about the impact of typhoid, a water-borne disease, on Junior, the two-year old boy she held in her arms. Dulcie who had spent the last two weeks by Junior’s side with him admitted at the health center, and were waiting to be discharged so they can return home. “The nurse told us to remember to always boil the water we drink,” she told me.

Sister Martina Mangaea, one of three nurses who works at the health center explained to me later that water-borne disease-related cases are all too common in Bialla. 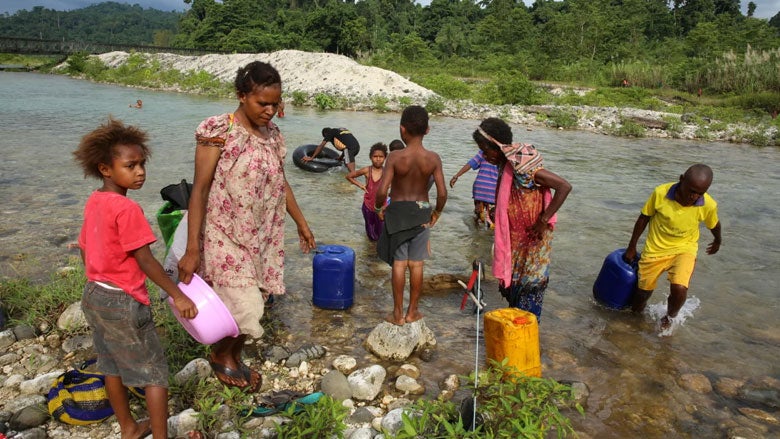 While some families in the area have invested in water catchments to collect rain water that can last them for up to a month, many families are forced to travel regularly to the Tiarua river to collect drinking water daily.
On my last day in Bialla, I joined a number of women and children doing just this; heading to the river with pots and pans resting on their heads and bathing towels over their shoulders. Yet I simply couldn’t keep up with their fast pace; most were young school children that were determined to make it back home and to school by 8am.

They spoke eagerly to me as we walked together; asking where I was from, and I tell them about my village in the mountains, about waking up early in the mornings like this and heading downhill to the river to bath and fetch water before school. I tell them I’m visiting to help people in PNG and overseas learn more about the water challenges in communities like Bialla – and the World Bank-funded PNG Water and Sanitation Development Project – and their smiles widen.

Exhausted from the trip – one that many of these girls make many times a week – I waved them goodbye and watched as they rushed back to their homes. For most of these girls, it’s relieving to know that Bialla will soon be one of the first communities to see a new water supply system build as part of the World Bank-funded project. For them; a water system is not just a water system; it means these long, frequent trips to the river, bearing heavy weight daily and missing school, will soon be over.

Under the recently launched Water and Sanitation Development Project, ten district towns like Bialla and nine provincial centers are expected to see the installation of new or refurbished piped water connections.