Forty years ago in December, Deng Xiaoping delivered his historic speech "Emancipate the mind, seeking truth from facts and unite as one to face the future." This triggered four decades of reforms that have transformed China into the world’s second largest economy.  By some time in the next decade, China will be among the few countries in the world that will have transitioned from low income to high income status since World War II.

Understanding the path China traveled, the circumstances under which historical decisions were made, and their effects on the course of China’s economy will inform future decision makers.  Increasingly, this reflection is important to the rest of the world as more and more countries see China as an example to emulate.  At the 19th Party Congress in November 2017, China accepted this mantle for the first time since the onset of reforms.

In some ways, China’s reforms were fairly mainstream.  The country opened up for trade and foreign investment, liberalized prices, diversified ownership, strengthened property rights, kept inflation under control, and maintained high savings and investment.  But this is simplifying the reforms and obfuscates the essence of China’s reforms: the unique steps China took reforming its system are what makes its experience of interest (see the Annex). Its gradual approach to reform was in sharp contrast to Eastern Europe and the former Soviet Union.  Although often compared, China and other transition countries were simply too different in terms of initial economic conditions, political development, and external environment.

Predominantly rural and among the poorest nations on earth, China was marred by the failure of the Great Leap Forward and the political disruptions during the Great Proletarian Cultural Revolution. Integration into the global economy was minimal. Industry was inefficient, but also far less concentrated than in Eastern Europe and the former Soviet Union.  Perhaps most importantly, because China retained political continuity, the country could focus on an economic and social transition instead of a political one.

Comparison with much of the Latin American reforms also seems out of place. Brazil, Mexico and Argentina were far closer to a market-based system than China, and their reforms—liberalization and macroeconomic stability—were focused on macroeconomic stabilization, whereas China’s reforms aimed for a transformation of the economic system as a whole.  So there is no need to juxtapose the “Washington Consensus” with a “Beijing Consensus:” the approaches taken served very different purposes indeed.

How did China Reform?

Reforms in China developed gradually, starting in the rural areas with the household responsibility system and township and village enterprises. Steps to open the economy to foreign trade and investment only started to play a significant role in the 1990s. Financial sector and State-Owned Enterprises (SOE) reform was also gradual, gaining momentum only in the mid‐1990s. The country's motto was "Crossing the river by feeling the stones," denoting partial reforms in an experimental manner, often starting in a few regions, and expanding them upon proven success. A broader strategy emerged only in 1993, with the Decisions of the 3rd Plenum of the 14th Central Committee, but this too was implemented gradually.

In addition to being a means to find solutions suitable to China, experimentation and gradualism was a means to circumvent political resistance against reforms. Many in the Communist Party retained a deep suspicion of the market. Gradual experimental reform was also a pragmatic approach in a heavily distorted environment in which "first best" solutions were unlikely to apply. Experimental reforms, confined to specific regions or sectors, allowed the authorities to gather information on the unanticipated effects of reforms. They were also able to develop and test the administrative procedures and complementary policies needed to implement the reforms. Success meant the experiment could be expanded to other regions and sectors.

Finally, experimental reform also saved reformers from 'losing face'.  An experiment that did not work could be abandoned rather than condemned as a policy failure. The strategy reinforced the credibility of reform over time. By making reforms one step at a time, and starting with those most likely to deliver results, the government built up its reputation for delivery. Every successful reform helped the next one. This also built up experience and skills for the design and implementation of reforms, gradually China to build up its “reform” capital.

Decentralization of authority became a powerful tool. The provinces and local governments received increasing authority over investment approvals, fiscal resources, and policies. Provinces, municipalities and even counties were allowed, even encouraged, to experiment with reforms. Successful experiments became official policy and were quickly adopted throughout the country. By decentralizing, China turned the country into a laboratory for reforms.

The fiscal system and the political organization within the party were key in aligning subnational government incentives with that of the center. The fiscal reforms introduced in 1980 formed a de facto tax contracting system, with high revenue retention rates for local governments, particularly set for growth. For instance, Guangdong province paid a lump sum in revenues to the central government, and retained 100 percent of the rest. The benefits of reforms were distributed broadly across the population and governments, creating strong incentives to pursue growth and promote a market economy.

Within the party, achieving growth—by creating jobs and attracting investment—quickened promotions. Social achievements also played a role, but success with GDP growth – especially in the regions – was paramount to climbing up to higher posts. This regional experience enabled the most talented to demonstrate their capacity to reform. A disadvantage was imperfect macroeconomic control and repeated bouts of inflation driven by local government loosening of investment and credit controls. These conditions gave rise to local protectionism, which threatened to undermine China’s unified market. In 1992, reforms regained momentum after Deng Xiaoping's "Tour through the South", but inflation re-emerged, and the agenda became one of centralization of policies. Fiscal and financial reforms followed aimed at creating the tools for macroeconomic management in a market economy.

In the course of reforms, the country's own particular transitional institutions emerged. The "dual track" system for growing out of the planned economy was the preeminent of all transitional institutions. It allowed a continuation of the planning system at planned prices, which avoided the collapse of production. But on the margin the system allowed a nonplanned economy to emerge. This also provided the information needed to gradually reform within-plan prices in such a way that by the time of the abolition of most material planning in the mid‐1990s, plan and outside‐plan prices had been largely aligned.

Similarly, the de facto fiscal contracting system installed after 1980 incentivized growth to subnational governments by leaving much of the incremental revenues in the provinces. Able to self-manage resources, local officials pursued reforms and attracted the investments needed to promote growth.

A very effective hybrid institution was the Township and Village Enterprise (TVE). This type of enterprise form operated outside the plan, but was owned and to some extend managed by local governments. These enterprises expanded production and created jobs. As private property was frowned upon and hardly protected by law, creating an ownership form that aligned the interests of the local government with that of the enterprise was crucial. Once private property became more acceptable, most of the TVEs were overtaken by private and foreign-invested companies as the main source of growth and job creation. Increasingly, TVEs are being turned into private companies.

The study and formulation of reforms and new policies was institutionalized in China. Starting with the China Academy of Social Sciences a variety of think tanks sprang up to study and promote reforms. Among the most influential were the Development Research Center (DRC) of the State Council, and the State Commission for the Reform of the Economic System. Not burdened by bureaucratic interests like many traditional government departments, these organizations were influential in formulating and directing reforms.

In my view, China's reforms can be distinguished in three phases: Market Seeking reforms, roughly from 1978 to 1993; Market Building reforms from 1993 to around 2003; and Market Enhancing Reforms from about 2003 onwards.

The first phase saw a genuine search for the right economic institutions for China. Informed by reforms in Eastern Europe under communism, reforms concentrated largely on microeconomics, to some extent with a neglect of macroeconomics, and the highly volatile growth rate in the 1980s bears witness to that.  It was a genuine search for what elements of a market economy would work in China, and which ones would be politically acceptable at the time—household responsibility system, dual pricing, TVEs, and special economic zones for foreign investment. 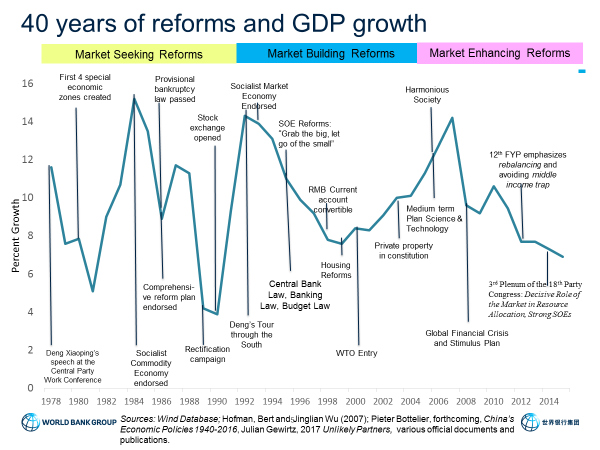 The 1993 Decisions of the 3rd Plenum of the 14th Central Committee signifies the start of the second phase by laying out a comprehensive plan to build the institutions for a market-driven economy.  These included a modern tax system, enterprise reforms, and a financial system that separated policy banks from commercial banking. The start of serious state enterprise reform in the mid-1990s allowed those commercial banks to indeed become commercial, and housing and (urban) social security reforms followed.  Entry in the WTO not only served as a lever for those domestic reforms, but also ensured much greater competition on the goods market.  The slashing of import tariffs made China far more competitive in exports, and facilitated viable platform for final assembly Asia-based exports hitherto produced elsewhere.  The inclusion of private property in the constitutions concluded the market building phase.

This phase—the Zhu Rongji years if you like—can be seen as years in which the state left increasing room for the market.  Private investment in the economy exploded and increased its share in the economy from less than 2 percent in 1992 to some 15 percent by 2003 (some of this was due to a reclassification of collective enterprises as private).  In 1999, government also consolidated all the industry-related ministries into the Ministry of Commerce and the Ministry of Industry and Information Technology.

Since then, reforms have focused on what I would call enhancing the market. The two main ingredients? A gradual expansion of the social safety net (pensions, health care, welfare), and a return of Industrial policy as noted by Ling and Naughton (2016).  "Techno-industrial policy" had been on the defense after 1978 but re-emerged after Zhu Rongji left office.  The Systems Reform Commission was merged with the State Development Planning Commission in 2003, to form the National Development and Reform Commission. In 2006, the Medium-Term Strategy for Science and Technology was launched along with 16 Megaprojects, returning industrial policy to the forefront. The global financial crisis, presenting China with a large domestic stimulus, encouraged the policy, and state banks and state enterprises were called to help policy implementation.

The 19th Party Congress and General Secretary Xi Jinping's report confirms these policy directions: market-based allocation, a dominant role for public ownership, and a strong emphasis on industrial policies and science and technology to achieve the goals of the "first phase of the New Era (2020-2035)" namely socialist modernization.  With the New Era, China seems to have found its distinct own economic system, with markets and state ownership living side by side, and with industrial policies guiding the market.  This system has its own complexities and issues, but that topic is for another day.  However, those who thought that "crossing the river" would lead to a familiar market economy similar to those found in OECD countries, should think again.