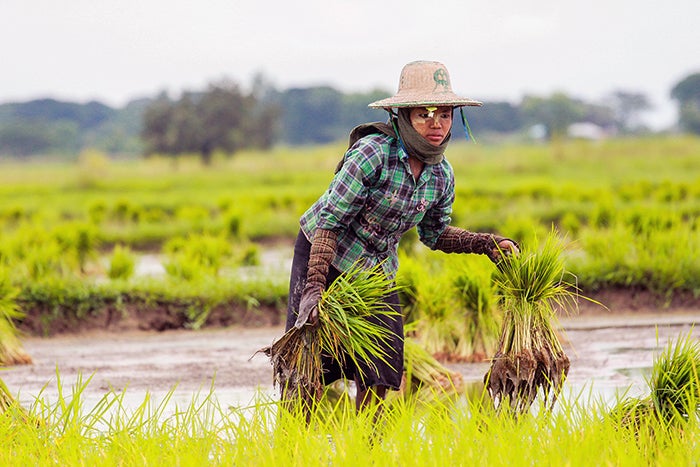 Myanmar’s unusually fertile soils and abundant water source are legendary in Southeast Asia. It is even said that Myanmar has the most favorable agricultural conditions in all of Asia. Almost anything can be grown in the country, from fruits to vegetables, from rice to pulses. The agriculture sector dominates the economy, contributing 38% of GDP, and employing more than 60% of the workforce. The importance of agriculture in the economy and as an employer will diminish in coming years as a result of structural transformation. However, the sector will continue to play a remarkable role in reducing poverty in Myanmar for many years to come.

Myanmar’s farming systems are well diversified. A recent farm economics study by the World Bank and LIFT (Livelihoods and Food Security Trust Fund) found that most farms produce paddy during monsoon season but grow a variety of other crops such as beans and pluses, oil seeds, and maize during dry season. This is a very positive development as it helps to strengthen resilience of farming systems and effectively manage water during dry spells. In addition, the rice consumption per person is lower than reported in official statistics (132 kg instead of reported 175 kg). This shows that people’s food basket consists of more proteins or vegetables in addition to rice, which is very important to combat Myanmar’s high levels of malnutrition.

Agricultural productivity is low. The study confirmed that land and labor productivity in Myanmar are much lower than in other Asia’s rice bowls. For example, during monsoon season, one day of work generates only 23 kg of paddy in Myanmar, compared to 62 kg in Cambodia, 429 kg in Vietnam, and 547 kg in Thailand. Low labor productivity is the main reason why agricultural wages are some of the lowest in Asia. An agricultural worker in Myanmar earns only $1.8-$2.5 per day during monsoon season, and $3.0-$3.5 during dry season. In comparison, a farm laborer in Thailand earns $8.5 per day, and a Philippine farmer earns on average $7 per day.

Farm profits in Myanmar are among the lowest in Asia. This is a direct result of low productivity of land and labor. In 2013-2014, the net profit from producing monsoon paddy averaged $114/hectare. This is ten times smaller than those in China for example. A similar picture arises from producing other crops. Farm profits in general are not sufficient to raise households’ per capita income above the regional rural poverty line, according to the study. This indicates that the potential of the agriculture sector has not yet been realized when it comes to poverty reduction.

Myanmar Has the Lowest Profits from Rice Production

There is a lack of agricultural public programs and public goods. Farmers in Myanmar are less educated and less knowledgeable than their regional peers; they also access fewer public services than farmers in neighboring countries.

First example, seeds: the supply of certified paddy seeds is estimated to meet only 1% of the demand. The situation for other crops is even worse: the public system does not produce enough quality seeds. In addition, the enabling environment for the private sector is not conducive enough to stimulate seed imports or production and multiplication of seeds in the country. It is not a surprise that most farmers use their own saved seeds, a practice that keeps yields low.

Second, the insufficient use of fertilizers: Myanmar farmers use much less fertilizer, often with the wrong nutrient balance, because of the lack of knowledge and training and a shortage of fertilizer quality assurance. As a result, agricultural yields remain low.

Third, poor access to irrigation: In 2014-2015, only about 3 million hectares of agricultural land were part of the public irrigation systems, which makes up 15% of the crop area. This is much lower coverage than in Indonesia and Thailand (about 30%), China (50%), and Vietnam (70%).

A policy shift is needed from rice production to broad-based agricultural support. Producing more and getting higher paddy yields does not automatically lead to higher farm incomes. Higher incomes will arise from better farm management triggered by better public programs and policies. Higher income will also come from more strategic diversification. The study found that in many regions of Myanmar, paddy production is less profitable than growing other crops, especially during the dry season. The most profitable is green gram, for example, and it is also less costly and less thirsty for water than paddy. It is important, therefore, that farmers have the freedom to select the least costly and most profitable crops to make their production effective and profitable. In other words, producing more by using less inputs, or using inputs better instead of using more to achieve higher yields, is key to ensuring high returns for Myanmar’s agriculture.

Agricultural policymakers in Myanmar can do more to step up and provide high quality agricultural support programs. Agricultural productivity is affected by many factors. Some of them are beyond the immediate influence of agricultural policymakers such as a decrease in labor availability, labor costs or cost of working capital. Yet many factors can be influenced directly by the agricultural ministry. The public seed production system, which is currently biased towards hybrid rice varieties, needs to broaden its scope to a diverse range of paddy and other crops. Agricultural extension services are to be scaled up and strengthened to reach out to more farmers and cover more crops to accelerate adoption of productivity-increasing farm technologies. Irrigation systems can be made more flexible and provide on-demand irrigation services to enable farmers do produce different crops in different areas, and respond effectively to market opportunities.

This post was edited on June 29 to correct a statistic. This is the same issues what is happening in my own country Nigeria,but with the new solution;the Agricultural pollcymakers in Myanmar's can step up high quallty production of foods n make life more easy for people living their.

I'm wondering where you pulled the figure of $15 per day (Bt528) for a Thai farm labourer from?
The minimum daily wage in Thailand is Bt300 (US$8.52). I do not know of a single farm labourer in Thailand earning any more than Bt300 per day, but I've met hundreds who earn considerably less.
I'd also like to know since when the US dollar stopped having two decimal points, eg: $1.8-2.5?
These errors throw into question the other "facts" quoted in the article.
We ordinarily reproduce The World Bank material (with acknowledgment). I'm afraid we won't be using this piece as we will be laughed at if we claim a Thai farm labourer earns $15 per day.

Dear John, thank you for pointing to the mistake in the estimate of the farm wages in Thailand. They are indeed about $8.5 a day, which is now corrected in the blog. The actual point of cross-country wage comparison is to show that low productivity and profitability of paddy production in Myanmar put pressure on wages for hired labor. If productivity is raised, wages can go up too, as is the case in other countries.

Delighted to see that Myanmar’s farming systems are well diversified but very sorry to learn that Farm profits in Myanmar are among the lowest in Asia. There is no doubt that Myanmar needs effective seed systems and national fertiliser policy strategies to meet the improving agricultural public programs, and to increase the future agricultural productivity and sustainably in Myanmar.
Before making investment in irrigation to improve poor access to irrigation, agricultural policy makers should think twice and act wise. More than 60% of total land in Myanmar is upland and most of rice growing areas are rain-fed, and the area under irrigated crop (rice) cultivation cannot be increased easily. Appropriate policies and regulations are necessary to improve the water proclivity and water-use efficiency in the country.

An interesting and informative piece on the status of agricultural practices in neighboring country Myanmar. It is well pointed out that access to seed and other agricultural inputs remain a major concern for the farmers. However, enhancing the private sector (e.g. agricultural retailers and traders) can help to boost the market system. Also it will be interesting to know how does the agricultural marketing system of Myanmar functions because at the end of the day, the produced goods must be sold for a reasonable price and contributing to additional income.
The point on strengthening agricultural extension system is of immense importance. Similar experiences in Bangladesh suggests that resource trapped agriculture extension workers are resistant to change and there is huge scope of the private sector to fill in the gap. A personal experience indicates that positive outcome may happen if micro level public private partnership platforms can be developed to set up a demand led extension system

Dear Otavio, thank you for your comment. It is indeed not always true that the lower consumption of rice leads to the higher consumption of other food. On average, however, in the countries with high economic growth as in Myanmar in the last 5 years it can be assumed that people satisfy their minimum food/nutrient requirements by the evolving mix of food: less rice and more of non-rice products. We observe this situation all across Asia, i.e. the gradual reduction in rice consumption and uptake of meat, milk, vegetables, beans and pulses, etc. We have not looked at the food consumption in detail, as it was beyond the scope of the report. The report mainly focused on farm production site. In regard to consumption, we only studied the consumption of rice, to compare our results with other studies and the government figures, as rice is key for production story. The government prioritizes paddy production over other crops, which would need to be adjusted going forward given the declining domestic demand for rice and higher rice surplus already available to export without much improvement needed in productivity. The upcoming World Bank’s Poverty Report will contain more information on the pattern of food consumption in Myanmar.

You said "the rice consumption per person is lower than reported in official statistics (132 kg instead of reported 175 kg). This shows that people’s food basket consists of more proteins or vegetables in addition to rice".
This conclusion isn't necessarily true. It's not because people from Myanmar consume less rice that they consume more of other foods. It could be just the case they are malnourished on average. Do you have data of food consumption per person per day from Myanmar as compared to, say, Thailand?
Thanks