Why Disruptive Technologies Matter for Affordable Housing: The Case of Indonesia 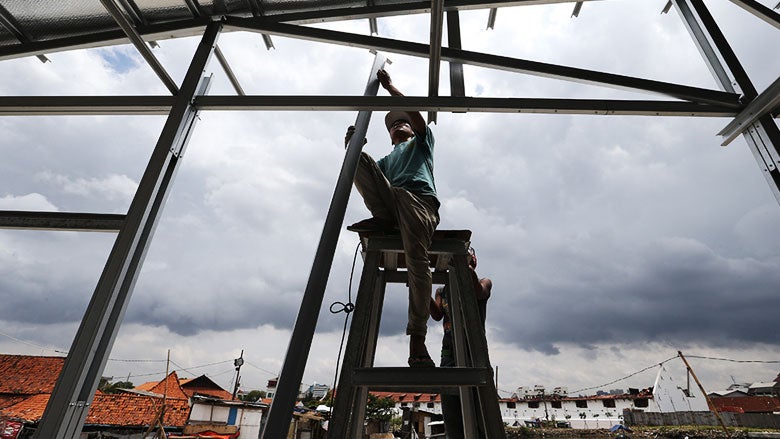 Big Data. Blockchain. Drones. E-Wallets. Artificial Intelligence. These are words that one would expect to hear at the latest conference in Silicon Valley, not during a discussion of Indonesia’s affordable housing challenges. Yet they were buzzing through the captive crowd in Jakarta at the Disruptive Technologies Workshop for Affordable Housing on September 17, 2018. The event, hosted by Indonesia’s Ministry of Public Works and Housing with support from the World Bank’s National Affordable Housing Program (NAHP), was attended by 150 participants from local public agencies, developers, lenders, and community organizations. The workshop’s goal was to explore one big question: How might Indonesia harness the power of disruptive technologies to transform its housing ecosystem?

Indonesia cities are growing faster than those of its Asian neighbors at a rate of 4.1% a year. However, the benefits of urbanization – economic growth and poverty reduction – won’t be fully realized until the country can increase access to basic services and invest in affordable housing for its residents. An estimated 820,000 to 1 million housing units are needed on a yearly basis to meet the growing demand between now and 2030.

Indonesia’s current housing situation dovetails with the rapid development of its technology sector. There is strong start-up culture that has birthed local giants like Go-Jek, which started as a simple ride-hailing app for motorcycle taxis and expanded to over a dozen services, including food delivery, massage booking, and mobile payments. Go-Jek is currently valued at close to $5 billion. Through its ascent, it has revolutionized aspects of life in Indonesia’s cities and contributed to a booming gig economy.

Workshop participants were keen to discover: were there other budding technologies out there, like Go-Jek, which could change the way Indonesia approached housing? Here are a few of the promising pitches that were presented to the group.

Property PriceTag
Use of Big Data and new technologies to track housing supply and demand for informed decision-making
The technologies described above are just the tip of the iceberg of what was discussed at the workshop.  No longer a luxury of advanced economies, these disruptive innovations hold vast potential to empower informed decision-making, formalize the informal, and radically reinvent housing value chains to transform the affordable housing sector and improve the lives of millions. Of course, as with any technological advancement, there are serious issues to consider and plan for such as consumers’ privacy rights protection and cybersecurity in an age of interconnectedness. It’s a tricky task for any government to navigate, but one well worth the waterfall of benefits.
Topics
Urban Development
Digital Development
Countries
Indonesia
Regions
East Asia and Pacific
Series
#Housing4All
Disruptive Technologies