Why is ethnic minority poverty persistent in Vietnam?

What will it take to end poverty in Vietnam?

A few months ago, I journeyed to Lao Cai, a predominantly ethnic minority area in Vietnam’s Northern Mountains, to supervise a pilot survey. One older man I encountered—typical of many we saw—was a subsistence farmer with minimal education who spoke only his native language and had barely ventured beyond his village.

Members of ethnic minority groups make up 15 percent of the country’s population but account for 70 percent of the extreme poor (measured using a national extreme poverty line). During Vietnam’s two decades of rapid growth, members of ethnic minority groups in the country have experienced overall improvements in their standards of living, but their gains have lagged behind those of the Kinh majority.

Why is ethnic minority poverty persistent? This has been the subject of numerous studies, including a 2009 study on ethnicity and development in Vietnam as well as a chapter in our more recent Vietnam Poverty Assessment. This is also one piece of the research my team is currently pursuing.

I have been struck by how much the situation of ethnic minorities in Vietnam resembles that of indigenous people a world away, in Mexico, where I lived for a year while working on my dissertation. In both countries, the groups are highly diverse, make up similar fractions of the country’s population, and face similar challenges. Indeed, the best comparative global study (by Gillette Hall and Harry Patrinos) I’ve seen on the issue finds surprisingly common profiles of indigenous/ethnic minorities around the world.

My list of inter-related factors behind high poverty of ethnic minorities in Vietnam would include:

Similar factors would apply to indigenous groups in many countries.

I am optimistic that at least some of the underlying causes of ethnic minority poverty are becoming less important over time. Education levels have risen for recent generations of ethnic minority children. This means more are learning the Vietnamese language, which will enable them to connect via markets and migration with the country’s broader prosperity.

I saw signs of this on my trip to Lao Cai: Although the older man I described earlier has very limited connections beyond his village, his children who are in their 20s spoke fluent Vietnamese and have travelled widely for work. I expect that as this generational shift continues and networks for ethnic minorities spread, we will see increasing numbers leaving the family farm to seek and find opportunity elsewhere.

A couple weeks ago I went on a tour with my team to four universities across Vietnam to present the Vietnam Poverty Assessment. Our talks generated lively discussions, and we polled participating students and faculty via SMS for their views on the best way to reduce ethnic minority poverty. My colleague Ngoc Nguyen ran the poll off her laptop using the open source software FrontlineSMS. Improving access to markets and offering free education were the most popular responses, and many offered their own free text “other” responses. 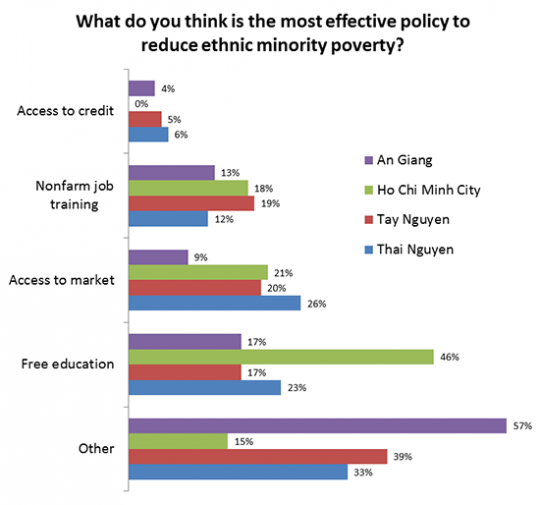 Thinking about ethnic minority / indigenous poverty in Vietnam or in your own country, how would you have responded to this poll? Please share your ideas with us in comments. Dear Gabriel,
Clearly the poll under-represented the voices of the poor and ethnic minorities in Vietnam. Hence with serious precaution, here are some quick thoughts to share:
1. Financing may be not the biggest problem.
2. The other three options imply that low social returns to economic activities may be the biggest problem. I am currently working on this hypothesis!
3. Except Ho Chi Minh City where people are in generally more isolated with ethnic minority, results in other three provinces reflected other things may be the problems that deserved examination. For example: there is lack of entrepreneurship among the indigenous poor.
You may have been already aware of the fact that although social welfare is available for the indigenous poor, there are huge differences in quality as well as quantity between rural/urban or highland/lowland.
Everything is still speculation at best, please share with us new evidences from your researches as soon as you have them.

I very much appreciate the thoughtful comments. A few reactions:
1) The poll is not a random sample and only includes the university students and faculty at our presentations, so it definitely does not include many poor Vietnamese.
2) You often hear people say in Vietnam that the “subsidy culture” reduces effort by poor Vietnamese (principally ethnic minorities). If this is a problem, it should be possible to design social protection programs to minimize disincentive effects, as has been done with such programs in developed countries. But I am skeptical that this is really a substantial problem at all in Vietnam. What is the evidence?
One recent evaluation of transfer programs in 3 Latin American countries found no significant effects on labor supply:
http://www.chronicpoverty.org/uploads/publication_files/alzua_cruces_ri…
3) We often think that we should make policy by identifying and then directly attacking the biggest problems. But the choice of policy should also be a function of how *effective* our policy levers are for producing change. Social exclusion and lack of quality land might be the most important obstacles facing ethnic minorities, but they are also difficult to address through policy. Education is not the whole story, but improving education quality and access is one area where policy improvements are feasible and can make a difference.

Minority groups lack of:
- participation in social welfare
- decision making
- information
- education
- they lack of skills in many scop

I was interested to read your reflections. The way social welfare programmes under the NTP are implemented, and the still prevailing 'subsidy culture' (leading to self-stigma) definitely has something to do with it as well (as is also similar to indigenous issues on the North American continent, by the way). Efforts to include marginalised communities in broad-based economic growth need to go beyond the State supplying inputs or money (subsidies) to stimulating local entrepreneurship and inclusive value chains. Although it is based on a relatively small project evaluation, you may be interested in this study on developing rural markets in Yen Bai and Tuyen Quang, which is geographically located next to Lao Cai that you refer to, and with similar conditions and issues. See: http://www.ncg.dk/index.asp?id=35952
Here is a brief intro: "The evaluation applied an analytical framework that sought to identify how sector sub-systems emerged and consumer behaviour evolved through the alignment of actors towards self-sustained local markets in line with national food security and environmental health targets in these remote mountainous districts, largely populated by ethnic minorities.
By tapping into local systems of policy implementation, organization and social mobilization, the evaluation found evidence of positive impact even in the high altitude mountain communities that previously have not been able to benefit from the expanding domestic demand and growing markets for e.g. rice and pork meat in Vietnam. The evaluation concluded that it is possible to apply a market-based approach that is directly relevant even for the poorest by carefully selecting and framing the problems to be addressed, and making sure adapted and affordable inputs are locally produced and distributed particularly in areas that are geographically remote, structurally marginalized and largely populated by ethnic minorities.
Concurrent with this evaluation, a World Bank funded study also identified the evaluated approach in the northern province of Yen Bai as best practice to reach national sanitation targets in rural areas."

Dear Gabriel
I think the points you outline are the key but do not seem to be reflected in the poll questions/answers. I would add that of course education is key but it is going to be a gradual shift. In the central highlands the indigenous people have been replace by migrants from kinh and other ethnic groups. They do not have the same resources to enter into the market economy. The first priority is to reduce social exclusion #2 in your list, quality land would help also #3. They need this and more, if their self identity was improved this would certainly help but this would be a slow process too. They are not a priority for the government, in the central highlands they are still taking land away for bauxite mines etc. and the government is now encouraging them to work overseas as migrant labour. They are second class citizens and they will stay that way under current processes.
1. Geographical isolation and limited market access,
2. Social exclusion, culture, and language,
3. Limited access to quality land,
4. Low rates of out-migration, and
5. Low levels of education.