The Economic Case for Early Learning

We are living in a learning crisis.  According to the World Bank’s 2018 World Development Report, millions of students in developing countries are in schools that are failing to educate them to succeed in life. According to the UNESCO Institute of Statistics, there are 617 million children and youth of primary and secondary school age who are not learning the basics in reading, two-thirds of whom are attending school. The urgency to invest in learning is clear.

Nobel Prize winning economist James Heckman has made the case for investing in early childhood education based on cost-effectiveness.  Early Childhood Development programs produce a host of benefits.  One of them is preparing the child for primary school.

But the effectiveness of investments in children do not end there. Early childhood experiences have a profound impact on brain development, affecting learning, health, behavior, and ultimately, lifetime opportunities. Gaps in cognitive and social-emotional development in children’s early years, before they start school, can limit children’s ability to take advantage of primary school and realize their full potential. It is important that not only do children enter the classroom ready to learn, but that school offers a real opportunity for learning to take place.

And it is especially important that the first few years of schooling result in learning.  This can be measured by the child’s ability to read and to comprehend what she reads. The ability to read enables children to access the curriculum and is thus a good indicator of whether an education system is doing its job. Reading makes them independent learners for life, reduces the cost of schooling, and raises the efficiency of public spending.

Just as learning has a return, there is a return to measuring learning.  There is a cost-benefit analysis associated with measurement. Caroline Hoxby of Stanford University, discusses the cost of learning measurement. What she calls “a good accountability program” is highly affordable  and includes comprehensive tests, standards and a report card system. She argues that “the most expensive programs in the United States generally cost less than one quarter of 1 percent of per pupil spending.” Globally, testing is among the least expensive innovations in education reform. In fact, in no country does testing cost more than 0.3 percent of the national education budget at the basic education level.

While participating in an international assessment might cost a country close to ¾ of a million dollars, an early reading assessment such as EGRA, on the other hand, costs just over 200,000, according to UNESCO.  On a per student annual basis, the costs are 2 cents vs. 20 cents.

Early grade assessments have produced national learning studies for more than 80 countries. This massive knowledge base allowed us to compare results to other countries that have done international (PISA, TIMSS, PIRLS) or regional (PASEC, SACMEQ, LLECE, PILNA) assessments.  In fact, the recently launched World Bank’s Human Capital Index puts all such countries on a common scale using the Harmonized Learning Outcomes database for 32 additional countries that have done national EGRAs – most of which are low to lower-middle income countries. These kinds of globally shared metrics of learning, which can be compared across countries and over time, have enormous value and prove that the global learning crisis is deep.

This confirms what the WDR 2018 reported when it said that a large number of the world’s children in low income countries cannot read. For the countries where we have data on learning, if we take a simple average of the results on reading and mathematics we find that only close to half of the children in school know how to read and do basic math. 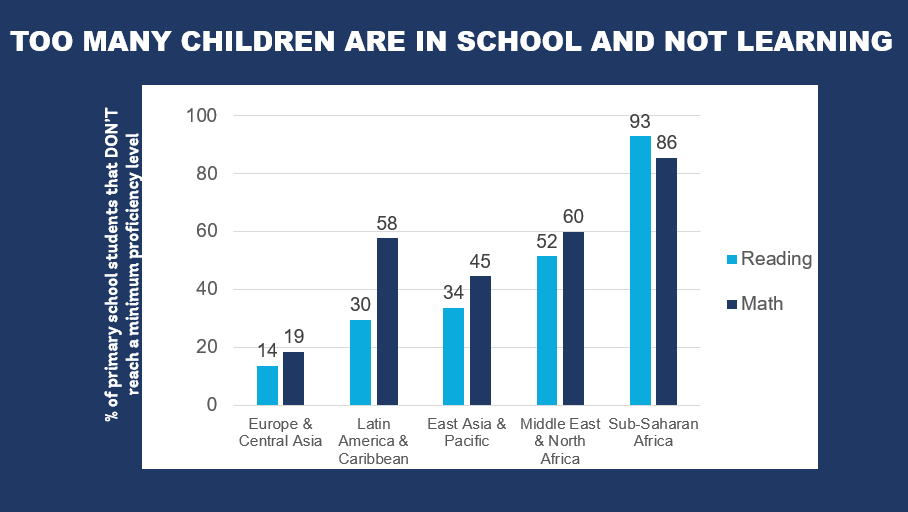 The point is what are we going to do about it.  Early measurement is a necessary start. Fortunately, the world has already endorsed this kind of measurement through the learning indicators for SDG 4: Education. We must now be sure to carry that mandate forward so that all countries are producing regular, reliable, and comparable early grade learning data.

Thank you for the insight and glad to learn that the importance of education, especially the early foundations of it, is acknowledged more. Also, that an evidence-based approach is fostered.
I just came back from a teaching experience at an American University in Iraqi Kurdistan and have experienced willing and dedicated students who, however, were not able to formulate their thoughts concisely in a 300-word essay despite very clear instructions and a sample essay. Also despite having gone through prep courses. Thus, once more (after working in the MENA region now for seven years, both at universities and by training adults) I concluded that it is not only about reading, writing and basic math. All kind of teaching, even at kindergarten level, should encourage students to ask questions and to apply their gained knowledge without fear of failure. Which is a didactic challenge in cultures which avoid any kind of risk or uncertainty due to the fear of feeling embarrassed in public.
Furthermore, in most developing countries teachers are often abusing their power, e.g. by publicly punishing students (physically), even with the appreciation of the students’ parents. Certainly, this does not foster an atmosphere in which learning is seen as fun. Students learn quickly that learning by heart and not challenging the teacher with questions is the best survival tactic in the short run. However, in their lifelong run, it is not. Not for the individual nor for nations and societies.
The proposed evaluation will measure the ability of reading. So this will direct the teachers' efforts to make exactly that happen. They will use the same techniques which have proved to be successful in the past if they are not a) understanding that it should not only be about „the child’s ability to read“ but also „to comprehend what she reads“ and b) get training on how they can adapt their teaching with regard to the second aim without losing respect in their respective culture.
Thus, I suggest modifying the evaluation criteria. These criteria not only are means to measure, but they are also impactful means to steer development which why it is important to scrutinize their potential side-effects.

More testing is not the answer to Harry's last question: what are we going to do about not giving so many students basic skills? We know the problem, we really don't need more thermometers, we need cures. And the cures are straightforward: well-educated and well-paid teachers, much smaller class sizes; good learning materials, facilities conducive to learning, as well as decent sustainable livelihoods for families, good health care, etc. Harry's 2-cent solution is just that and about all it's worth. The Bank's 2018 WDR mentions all the investments above but then goes back to the Bank's standard response that more money may not be needed if we improve the efficiency with which money is spent. What nonsense! What about UNESCO's estimate of a $40 billion annual shortfall! Yes, it is important to look at educational outcomes but we need huge investment in educational inputs to do anything about them. Harry and the Bank need to put their money where their mouth is.

Thank you for your interest. It was great to hear today that progress was made on the methodology of measuring SDG4. The IAEG-SDGs experts have upgraded Indicator 4.1.1a to Tier 2, as requested by UNESCO, at its meeting in Stockholm, thus allowing various data sources to be used to collect comparable data on learning outcomes of children in the early grades. This is the first step towards achieving the SDGs and helping countries achieve quality education for all children.

Thank you so much for sharing this great finding and analysis . No one does seem to give focus to early learning despite early learning is the foundations for ones life.
Scholars in the area should voice out towards policy makers for seeking attentions

I think the million dollar question is what are we doing to do about it?
The childhood of 3 to 5 year olds has already been messed up by age-inappropriate teaching.

Thanks for sharing. Great post about economic way for early learning.