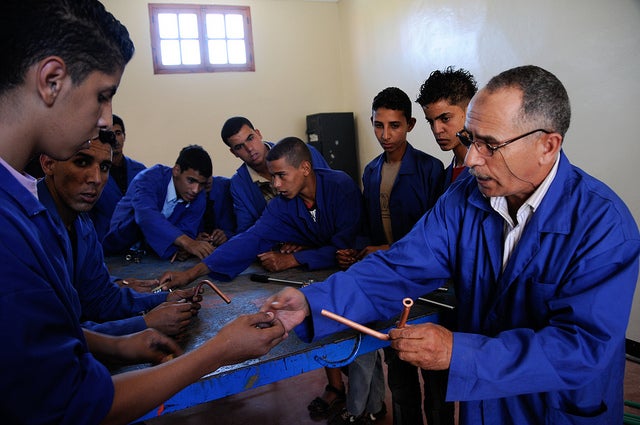 Next week, UNESCO will convene the world’s educational leaders in Incheon to set the agenda for educational development over the next 15 years. Those who think that’s mainly an agenda for the developing world should read our new report Universal Basic Skills - What Countries Stand to Gain. The report shows the scale of the effort that is ahead even for many of the wealthiest nations to develop the essential skills that can transform lives, generate prosperity and promote social inclusion. And with a new global metric of the quality of learning outcomes, the report demonstrates that the world is no longer divided between rich and well-educated countries and poor and badly educated ones.

Importantly, the post-2015 agenda is no longer just about providing more people with more years of schooling, but about making sure that individuals acquire a solid foundation of knowledge in key disciplines, that they develop creative, critical thinking and collaborative skills, and that they build character attributes, such as mindfulness, curiosity, courage and resilience.

The first thing the report shows is that the quality of schooling in a country is a powerful predictor of the wealth that countries will produce in the long run. Or, put the other way around, the economic output that is lost because of poor education policies and practices leaves many countries in what amounts to a permanent state of economic recession – and one that can be larger and deeper than the one that resulted from the financial crisis at the beginning of the millennium, out of which many countries are still struggling to climb.

Among the countries compared, Ghana has the lowest enrolment rate in secondary schools (46%) and also the lowest achievement levels for those 15-year-olds who are in school (291 PISA points). While it is difficult for Ghana to meet the goal of universal basic skills any time soon, if it did, it would see a gain over the lifetime of its children born today that, in present value terms, is 38 times its current GDP. This is equivalent to tripling Ghana’s discounted future GDP every four years during the working life of those students with improved skills. For lower-middle income countries, the discounted present value of future gains would still be 13 times current GDP and would average out to a 28% higher GDP over the next 80 years. And for upper-middle income countries, which generally show higher levels of learning outcomes, it would average out to a 16% higher GDP.

The goal of universal basic skills also has meaning for high-income countries, most notably the oil-producing countries. Many of them have succeeded in converting their natural capital into physical capital and consumption today; but they have failed to convert their natural capital into the human capital that can generate the economic and social outcomes to sustain their future. The report shows that the high-income non-OECD countries, as a group, would see an added economic value equivalent to almost five times the value of their current GDP – if they equipped all students with at least basic skills. So there is an important message for countries rich in natural resources: the wealth that lies hidden in the undeveloped skills of their populations is far greater than what they now reap by extracting wealth from national resources. And there is more: PISA shows a significantly negative relationship between the money countries earn from their natural resources and the knowledge and skills of their school population. So PISA and oil don’t mix easily.

One interpretation is that in countries with little in the way of natural resources education is highly valued, and produces strong outcomes, at least partly because the public at large has understood that the country must live by its knowledge and skills, and that these depend on the quality of education. In other words, the value that a country places on education may depend, at least in part, on a country’s view of how knowledge and skills fit into the way it makes its living.

One might be tempted to think that high-income countries have had all the means to eliminate extreme underperformance in education and should already have achieved the education post-2015 goal and targets. But the report shows otherwise. For example, 24% of 15-year-olds in the United States do not successfully complete even the basic Level 1 PISA tasks. If the United States were to ensure that all students meet the goal of universal basic skills, the economic gains could reach over USD 27 trillion in additional income for the American economy over the working life of these students. So even high-income OECD countries would gain significantly from bringing all students up to basic skills by 2030. For this group of countries, average future GDP would be 3.5% higher than it would be otherwise. That is close to what these countries currently spend on their schools. In other words, the economic gains that would accrue solely from eliminating extreme underperformance in high-income OECD countries by 2030 would be sufficient to pay for the primary and secondary education of all students.

The message of these rather complex analyses is simple: there is no shortcut to improved learning outcomes in a post-2015 world economy where knowledge and skills have become the global currency, the key to better jobs and better lives. And there is no central bank that prints this currency. We cannot inherit this currency, and we cannot produce it through speculation; we can only develop it through sustained effort and investment in people.

That raises the question of whether the improvements in learning outcomes suggested in this report are realistic – and how they can be achieved by 2030. The answer to the first question is unambiguously positive. PISA shows that top performers in education, such as Shanghai in China, Korea and Singapore, were able to further extend their lead over the past years, and countries like Brazil, Mexico, Tunisia and Turkey achieved major improvements from previously low levels of performance – all at a speed that exceeds, by a large margin, the improvements described in this report. So the world is full of examples of improvements in education, and there is no time to lose. Without the right skills, people end up on the margins of the society, technological progress doesn’t translate into economic growth, and countries face an uphill struggle to remain ahead in this hyper-connected world. Ultimately in this scenario, the social glue that holds our societies together will disintegrate. The world has become indifferent to past reputations and unforgiving of frailty. Success will go to those individuals, institutions and countries that are swift to adapt, slow to complain and open to change. The task for governments is to help their citizens rise to this challenge by ensuring that by 2030 all of their people are equipped with the knowledge and skills they need for further education, work and life.

This blog was originally posted on OECD's Education Today. Director for Education and Skills, Organization for Economic Co-operation and Development (OECD)