How could COVID-19 hinder progress with Learning Poverty? Some initial simulations Even before COVID-19 forced a massive closure of schools around the globe, the world was in the middle of a learning crisis that threatened efforts to build human capital—the skills and know-how needed for the jobs of the future. More than half (53 percent) of 10-year-old children in low- and middle-income countries either had failed to learn to read with comprehension or were out of school entirely. This is what we at the World Bank call learning poverty. Recent improvements in Learning Poverty have been extremely slow. If trends of the last 15 years were to be extrapolated, it will take 50 years to halve learning poverty. Last year we proposed a target to cut Learning Poverty by at least half by 2030. This would require doubling or trebling the recent rate of improvement in learning, something difficult but achievable.  But now COVID-19 is likely to deepen learning gaps and make this dramatically more difficult.

Temporary school closures in more than 180 countries have, at the peak of the pandemic, kept nearly 1.6 billion students out of school; for about half of those students, school closures are exceeding 7 months. Although most countries have made heroic efforts to put remote and remedial learning strategies in place, learning losses are likely to happen. A recent survey of education officials on government responses to COVID-19 by UNICEF, UNESCO, and the World Bank shows that while countries and regions have responded in various ways, only half of the initiatives are monitoring usage of remote learning (Figure 1, top panel).  Moreover, where usage is being monitored, the remote learning is being used by less than half of the student population (Figure 1, bottom panel), and most of those cases are online platforms in high- and middle-income countries. 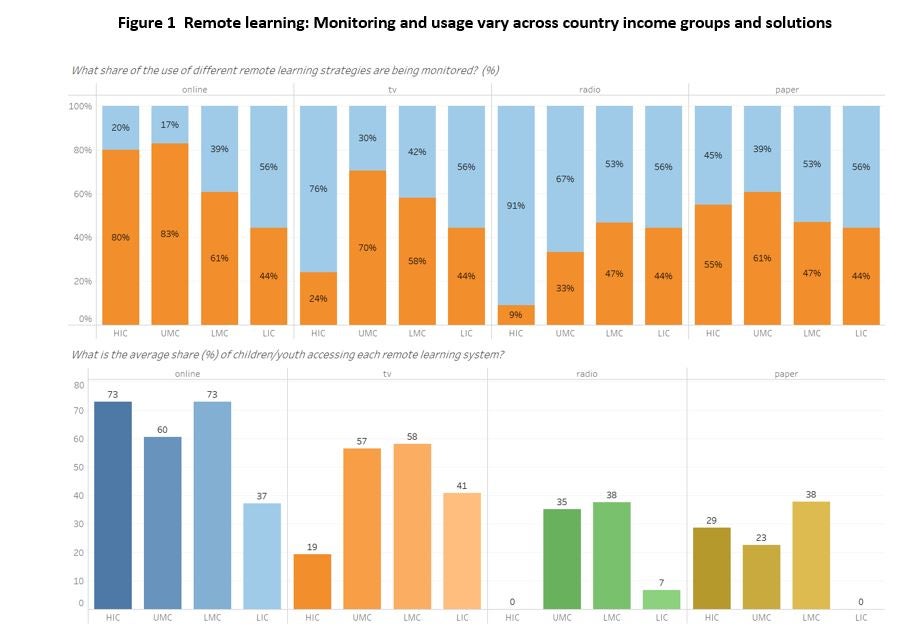 COVID-19-related school closures are forcing countries even further off track from achieving their learning goals. Students currently in school stand to lose $10 trillion in labor earnings over their working lives. That is almost one-tenth of current global GDP, or half the United States’ annual economic output, or twice the global annual public expenditure on primary and secondary education.

Figure 2 Learning Poverty could increase by 10 percentage points in Low-and Middle-income countries, in the most pessimistic scenario

out of 100 children in Low- and Middle-income countries 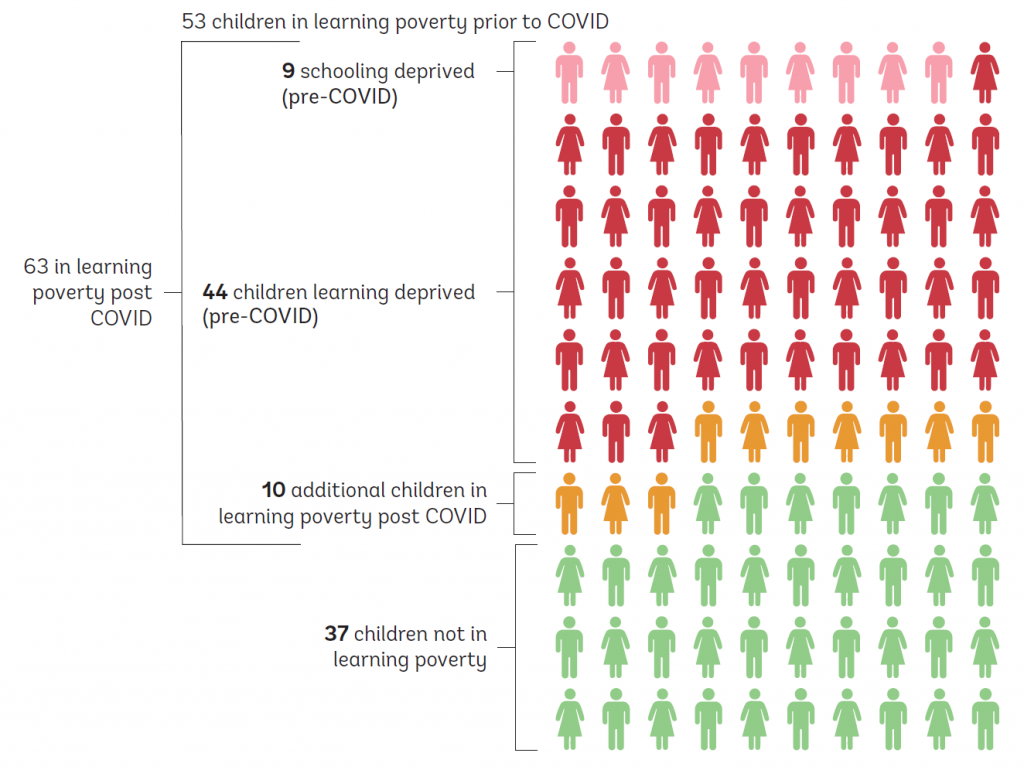 Most of the potential increase in learning poverty would take place in regions with a high but still average level of learning poverty in the global context pre-COVID, such as South Asia (which had a 63% pre-pandemic rate of learning poverty), Latin America (48%), and East Asia and the Pacific (21%). In Sub-Saharan Africa and Low-income countries, where learning poverty was already at 87% and 90% before COVID, increases would be relatively small, at 4 percentage points and 2 percentage points, respectively. This reflects that most of the learning losses in those regions would impact students who were already failing to achieve the minimum reading proficiency level by the end of primary—that is, those who were already learning-poor.

To gauge at the impacts of the current crisis in Sub-Saharan Africa and the Middle East and Northern Africa we need to examine other indicators of learning deprivation. In these two regions children are on average the furthest below the minimum proficiency level, with a Learning Deprivation Gap (the average distance of a learning deprived child to the minimum reading proficiency level) of approximately 20%. This rate is double the global average (10.5%), four times larger than the East Asia and Pacific Gap (5%), and more than tenfold larger the Europe and Central Asia average gap (1.3%). The magnitude of learning deprivation gap suggests that on average, students on those regions are one full academic year behind in terms of learning, or two times behind the global average.

In absolute terms, Sub-Sharan Africa and the Middle East and Northern Africa would remain the two regions with the largest number of learning-deprived children. The depth of learning deprivation in Sub-Saharan Africa will increase by three times more than the number of children who are learning-deprived. This is almost three times the global average, and four times more than in Europe and Central Asia. This suggests an increase in the complexity and the cost of tackling the learning crisis in the continent.

Going forward, as schools reopen, educational systems will need to be more flexible and adapt to the student’s needs. Countries will need to reimagine their educational systems and to use the opportunity presented by the pandemic and its triple shock—to health, the economy, and the educational system—to build back better. Several policy options deployed during the crisis, such as remote learning solutions, structured lesson plans, curriculum prioritization, and accelerated teaching programs (to name a few), can contribute to building an educational system that is more resilient to crisis, flexible in meeting student needs, and equitable in protecting the most vulnerable.

The results from these simulations are not destiny. Parents, teachers, students, governments, and development partners can work together to deploy effective mitigation and remediation strategies to protect the COVID-19 generation’s future. School reopening, when safe, is critical, but it is not enough. The simulation results show major differences in the potential impacts of the crisis on the learning poor across regions. The big challenge will be to rapidly identify and respond to each individual student’s learning needs flexibly and to build back educational systems more resilient to shocks, using technology effectively to enable learning both at school and at home.