A Lesson from Malala: Girls’ Education Pays Off

When I heard the news last autumn that 15-year-old Malala Yousafzai of Pakistan had been shot simply for standing up for her right as a girl to get an education, I was horrified.

It also reminded me how lucky I was.

When I was offered a rare scholarship to study abroad, it wasn’t acceptable for me, as a young married Indonesian woman, to live apart from my husband. My mother laid out two options: Either he would join me, which meant giving up his job, or I had to decline the offer.

I know it was her way to advocate for my husband to support me, which he did without hesitation. We both went to the United States to complete our master’s degrees. I combined it with a doctorate in economics, and we had our first child, a daughter, while we both were graduate students.

My mother had six girls and four boys (I am number seven). She also had a doctorate, working as a professor at the Institute of Education in Central Java. She had gone beyond what “normal” for a woman in Indonesia, far ahead of her time. And she was ready to support me, in her own way. 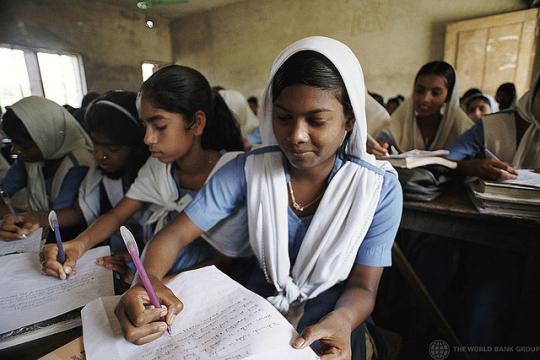 For a girl – or any child – to have the opportunity to realize her dreams, it takes three things: the determination and courage of her own convictions, the love and support of her family, and the support of her society. I was fortunate to have all of these things, including a family that wisely navigated society’s conventions. Because in the face of prejudice, it also requires pushing boundaries –sometimes with your family, sometimes with society.

Malala certainly has had determination and family support. She also was willing to take incredible risks. But an extreme minority decided to stop her. Her tragedy has triggered an outpouring of support both from her own society and from around the globe for the importance of investing in women and girls.

When Malala turns 16 on July 12, 57 million children worldwide will still be out of school, 31 million of whom are girls. Many more children – mostly girls – are forced to drop out before they can attain higher levels of learning, limiting their options. Often poor families keep girls at home when there isn’t enough money to send all children to school, and the return on investment from educating a daughter is too often perceived as lower than from a son.

This is a personal and development travesty. We know that children born to a mother who is educated are 50% more likely to survive past the age of 5. And we know that a girl with even one additional year of education can earn up to 20% more as an adult.


The good news is that we have made progress. Nearly two-thirds of all countries have achieved gender parity in primary education, one of the Millennium Development Goals. In fact, girls now outnumber boys in secondary education in over one-third of these countries. The World Bank Group has been a leading supporter of this effort. With support from IDA, the World Bank Group’s fund for the poorest countries, almost 6 million girls in Bangladesh are able to go school. In Yemen, conditional cash transfers have encouraged parents to allow their girls to attend school, helping nearly 40,000 students.

Yet progress remains uneven across the world. The 2012 World Development Report  found that girls' enrollment in primary and secondary school has improved little in many sub-Saharan African countries and some parts of South Asia. And an estimated two-thirds of out-of-school girls belong to ethnic minority groups in their countries. So there is much work left for us to do.

As Malala stands up again to speak on behalf of educating girls, we must all stand with her for the right for all children, everywhere to go to school and learn. We must share Malala’s determination and push the boundaries with them and for them to eliminate expectations, conventions, or poverty that prevent any child from fulfilling her potential. Education is important in each and every one life, government of the country must support them, they need our help for their better future, and for government girls and boys are equally important.

Beautifully expressed. And we must match that determination and boundary pushing with pragmatic on the ground investments in quality schooling.

In Asia most of country suffer this kind of women problem. infect million of malala killed there own feeling and there rights.
it could be change but I think that it would take some more time may be after 2025...
in villages women don't know there right.and many of them didn't study in own life.
i am also belong to small town and seen live but they are happy and don't have disappointed....

Poverty is a start point to achieve a prosperity and also the source of power to fulfill your passion. Work with passion and what you do is beyond your duty.