The early theory of human capital laid out in 1960s by Gary Becker argues that people treat investments in their human capital, which is mostly achieved through acquiring education, similarly to other types of investments – by evaluating the payoff in terms of expected earnings. What we need more information about is how exactly education affects labor market outcomes.

For more than 50 years, researchers (eg, Banerjee and Duflo 2005; Gunderson and Oreopoulos 2020; Peet et al 2015; Psacharopoulos 1972, 1994; Trostel et al 2002) have reported on the patterns of estimated returns to schooling across economies, but these estimates are usually based on a wide range of studies that may not necessarily be comparable. Our new dataset on private returns to education includes estimates from 1970 to 2014 using 853 unified household surveys. With this effort the definition of the measured variable, the set of controls, sample definition, and the estimation method for all surveys, all remain unchanged. Thus, the dataset presents comparable estimates of the returns from schooling overall, by level of education, by region of the world, by level of income, and by gender.

The Comparable Returns to Education database we are introducing, enables comparisons of returns to schooling from around the world. It includes the results from household and labor force surveys from 142 countries which have been harmonized and thus made comparable. 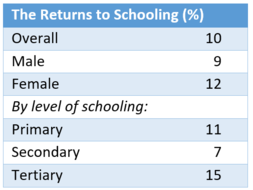 We estimate an average, worldwide private rate of return to schooling of 10 percent. The returns to schooling are higher for women than for men by two percentage points. On average, each subsequent year of schooling raises women’s earnings by 12 percent. In low-income countries, this number jumps to 13.5 percent.

However, earnings from additional schooling differ by level of education. The biggest pay off, at 15 percent comes from investments in higher education, followed by returns of 11 percent at the primary education level. They are lowest at the secondary level, at just 7.4 percent.

There is also substantial variation by world region. The returns from another year of schooling are highest in Sub-Saharan Africa, at 13.5 percent. Returns are lowest in the Middle East/North Africa region, at only 5.9 percent. Healthy returns are experienced in North America, Latin America, and East Asia. The returns are below average – at 8.6 percent – across European economies where all levels of education are widely accessible. Finally, across South Asia, where access to quality education is less prevalent and therefore the returns are at 9.6 percent.

Our database provides a reasonable estimate of the returns to education that may be useful for a variety of empirical work. The dataset compares favorably with other compilations, for example, the compilation of studies by Psacharopoulos and Patrinos (2018). One interesting finding is that our new dataset shows less of a decline over time than do other compilations.

When we restrict the sample to those economies for which we have data in all periods, we find that:

These figures and trends are all based on pre-COVID-19 pandemic data of course. The school closures over the past year and a half threaten to reduce school attainment and ultimately future earnings of an entire generation of students across the globe. It is critical that we steer the global education sector back on track and ensure that today’s young people can realize these historically high rates of return to schooling that will benefit their families, communities, and society as a whole.