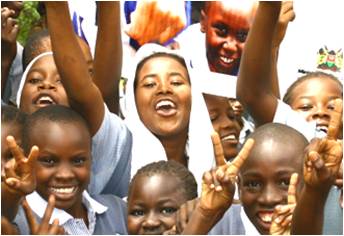 In the complex world of education policy, some experts comment that school-based deworming may be the closest we have come to finding a "magic bullet." In regions of the world with high worm burdens, such as Africa and South Asia, deworming children for mere pennies a year results in an incredible range of educational and social benefits, from higher school attendance rates to healthier children who are better able to learn in the classroom.

Globally, more than 1 in 4 people are infected by intestinal worms. In Sub-Saharan Africa high infection rates prevail, particularly among school children. Worms can cause anemia, stunting, lethargy and other problems that derail children's development. The positive impact of deworming on both health and educational outcomes is routinely cited as an example of aid effectiveness, including by Nicholas Kristof in the recent column “Getting Smart on Aid,” in the New York Times. Schools are also the best delivery mechanism for reaching children with safe, mass treatments.

While deworming has proven to be one of the most cost-effective interventions to get children into school, promising new research suggests that deworming children can also result in many long-term benefits, including higher wages, healthier individuals and stronger communities. The World Bank hosted a special panel on Rethinking Deworming this month, featuring guest speaker Michael Kremer, co-Founder of Deworm the World and Gates Professor of Economics at Harvard, who presented the new research findings of a study in Kenya.

The program in Kenya targeted school children in areas of high infection, using advanced geomapping techniques developed by the www.ThisWormyWorld.org project. Findings of a long-term impact study in Kenya showed participants who were dewormed as children had higher wages, fewer sick days, more work hours, and higher-level occupations. Even better, the treatment resulted in benefits to the health of external populations, including untreated children, younger siblings and neighboring communities.

Originally piloted by Deworm the World, the successful Kenya program was later absorbed into the national education strategy and rolled out to 3 1/2 million people. To replicate the program's success, three states in India have now embarked on piloting a similar approach to reach 35 million school children.

A panel led by World Bank Education Director, Elizabeth King, and Director of Human Development for Africa, Ritva Reinikka, discussed the cross-sectoral dimensions of deworming children. King focuses on the potential of deworming to help achieve learning for all. "We oftentimes think about classroom inputs," said King. "But the most important input into the educational process is really the child, and his or her readiness to learn."

"Education itself is a health intervention," said Bob Prouty, Chief of the Education for All - Fast Track Initiative Secretariat. "But we still need to make a clear case to donors that this is a smart investment. And capacity to implement is a problem." Lesley Drake, Executive Director of Deworm the World, tackled the question of how to replicate successful programs and mainstream deworming. A main challenge to deworming programs is a lack of medicine. Pharmaceutical giants GlaxoSmithKline and Johnson & Johnson have been stepping in as corporate partners to donate a total of 600 million deworming treatments a year - enough to cover every infected schoolchild in Africa.

The World Health Organization (WHO) Department of Neglected Tropical Diseases also made a statement that it is "fully supportive of a renewed effort to make school-based deworming a standard part of school health programmes.” Says the WHO, “Currently only 35% and 8% of school age children in need receive regular preventive treatment for soil-transmitted helminthiasis and schistosomiasis, respectively. Linking up deworming with education is the only sustainable way to expand coverage and reach the WHO target of covering at least 75% of all school age children in need. The enhanced donations of quality anthelminthic medicines by GSK, J&J and Merck KGaA provide a unique opportunity to achieve this. WHO will continue to provide technical support to all countries and their Ministries of Health and Education wishing to implement large scale school based deworming activities. The international effort in favour of Education for All provides a unique opportunity to fully institutionalize such activities and free all children from worms."

Watch the full event webcast and related presentations online. Also read How deworming promotes learning and health, by Tara O'Connell and Michael McDowell on the Education for All blog.