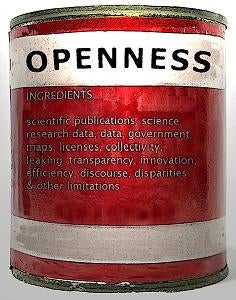 In the decade since the term 'open education resources'  was formally identified and adopted by UNESCO, related "teaching, learning or research materials that are in the public domain or released with an intellectual property license that allows for free use, adaptation, and distribution" have been slowly but surely creeping into mainstream use in many education systems around the world.  North America has recently seen prominent announcements about projects to provide free, online open textbooks in British Columbia and California, following similar sorts of headlines out of Poland earlier in the year. In June, the so-called 'Paris Declaration' [pdf] was released as part of a prominent international effort both to "increase government understanding of the significance of open education resources and to encourage more governments to support the principle that the products of publicly funded work should carry such licenses." In conversations with education ministries in many low and middle income countries over the past year, I have seen a marked increase in the interest in exploring the relevance of the 'OER movement' to national efforts to procure and develop digital learning resources.  Traditional educational publishers have been monitoring such efforts closely, identifying both potential threats to existing business models, and in some cases, ingredients for potentially new business models as well.

How might we be able to track related initiatives around the world?

Two good places to start are the OER Policy Registry maintained by the folks at Creative Commons and the recent Survey on Governments’ Open Educational Resources (OER) Policies [pdf] published by UNESCO and the Commonwealth of Learning. A number of useful search engines can help identify specific open educational resources for use.

Tracking such efforts might be useful for a number of reasons.  At a perhaps mundane level, a number of prominent groups have been promoting the development and use of such things, and this may help us discover whether such support and advocacy is having any substantive impact. More interestingly, doing so may help us better identify some of the fault lines that are opening as a result of the increasing widespread use of ICTs in education systems around the world. In many ways, the open education resource movement embodies an influential line of thought and set of activities that are helping to shape plans for the large scale roll-outs of ICTs in many educational systems, especially in developing countries. A number of rationales have been advanced in support of OER initiatives. What impact might such initiatives -- and the various reactions to them -- have for learners and teachers around the world?

Some countries that are in the process of planning for huge increases in the number of learning resources they will make available to students and teachers are finding that, in the digital age, with the potential for content to be easily copied, adapted and re-used in other contexts, the challenge of keeping track of just who owns what piece of content, and what usage rights or restrictions follow from this ownership, is adding layers of complexity to their efforts to provide access to digital learning materials. As governments continue to go into the open market to procure digital learning materials, to what extent do they need to, and should they, care about the different sorts of intellectual property rights associated with that content? We might discover some relevant insights by asking a few more general questions, like: Are there governments that are using lots of 'open' content already?  If so, how might we know this is happening -- what might we learn from this experience?

Mapping the use of OER around the world might be a useful exercise to help inform some of the answers that emerge to these sorts of questions. Canada's Athabasca University is currently trying to catalyze the diffuse global ‘OER community’ to explore collaboratively how OER projects around the world might be better identified, how the resulting data might be made available in useful formats, and how related tracking and mapping activities might be supported over time. If you are interested in learning more about this initiative, taking part in it, or even monitoring its progress, you would do well to visit a related page on the University of Athabasca web site.  A related online discussion kicks off on 12 November, and the eventual results will, I expect, be openly available to all.

Some additional items that may be of interest:

[-] A Basic Guide to Open Educational Resources (OER) from the Commonwealth of Learning, a group that has sponsored a lot of work in this area.

[-] Through its support for scores of related projects and organizations, the Hewlett Foundation has been instrumental in the growth of the open educational resources. Hacking Education with Hewlett's OER Grantees is a short blog post as a result of the most recent meeting of organizations that have benefitted from Hewlett support. Hewlett's work in this regard would make for an interesting case study of how a single funding organization can catalyze innovation by focusing substantial resources on a particular issue and helping to grow and nurture an entire ecosystem of groups with similar interests and goals. (How might such an ecosystem survive and evolve if -- or once -- its lead benefactor inevitably turns its attention to other issues and causes? That might potentially make for an interesting future case study as well.)

Thanks for bringing this topic to your blog. Even though OER have been in the education field for more than a decade, there is still much work to do on the raising awareness and promotion area.

I believe there is going to be a while before OER are used "formally" in the formal education. But surely they are already helping many "informal " students to learn.

Maybe educators need to begin to look differently what "informal" means and turn efforts to assess learning occurring outside the classroom via ICTs and OER, instead of the efforts of bringing (almost always late) ICTs to the classroom.

Following up on the post above:
"A world map of Open Educational Resources initiatives: Can the global OER community design and build it together? Summary report of an international conversation: 12–30 November 2012", a paper by Susan D'Antoni, is now available via http://goo.gl/4gl96.