Using ICTs in schools with no electricity 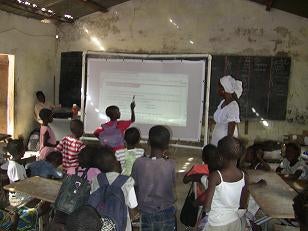 One persistent criticism that I hear of educational technology projects in many places -- and especially in Africa -- is that 'there are too many pilot projects'. 'What we really need', or so the lament usually continues, 'are things that scale'. While I don't necessarily agree that more pilot projects are not useful -- to the contrary, I have in the past explored why we need more (not fewer) ICT4D pilot projects in education -- few would argue that we shouldn't be focused on finding 'solutions' that 'scale'.

One challenge that many groups find when trying to scale educational technology projects is that they often begin by working with relatively well-resourced schools in or near urban areas, seeking to establish proof-of-concept that something specific works (e.g. a technology, an approach to teacher training) before taking on the greater challenges of working in, for example, rural schools that are off-the-grid and which have few (if any) qualified teachers. It should perhaps not be so surprising that what works in the first set of schools may not work quite so well in the second set.

There are other groups who choose to start with the most difficult environments first, figuring that (1) that is where the need is greatest; and (2) if a model or approach works there, it might have a better chance of working (most) everywhere.

I am regularly contacted by groups who seek to work in such environments, but only rarely hear back from them with reports about what they are actually learning about working successfully in such environments (I do unfortunately hear a lot about failure), and how they are changing their approach or model as a result. One organization I have heard back from recently in this regard was Cybersmart Africa, a group I had initially learned about because of its innovative use of nylon sheets, PVC pipe, and a modified Nintendo Wii remote to assemble low cost interactive whiteboards for use in schools in Senegal. Cybersmart Africa works exclusively in schools with classrooms with very poor physical infrastructure (including those with no or very limited electricity). "If this is the reality for 80% of schools in Sub-Saharan Africa, and we need to scale ICT use for education, why base what you are doing on what 10-20% of the privileged have?" asks Cybersmart Africa founder Jim Teicher.

(Another example of an approach designed to work in very difficult environments is so-called interactive radio instruction; this has been shown to scale well in many places, but, for a variety of reasons, has often proved to be difficult to sustain. One Mouse Per Child, which has also been profiled on the World Bank EduTech blog previously, is another.)

Many of the Western NGOs and firms with whom I speak who are interested in 'working in a developing country' start with a very high level or high concept approach, figuring essentially that, if the strategy is largely correct, the details will follow. (Indigenous groups and international NGOs with long experience 'on the ground' usually know better, of course.) Such groups can become frustrated when they discover that it is often an accumulation of 'small details' that ensure their particular approach or model does not work. It is better to walk than curse the road, or so the saying goes in Wolof, one of the languages used in Senegal, and this is an approach that the Cybersmart team seems to be following. When speaking recently with Teicher, one of the most encouraging things I found was that he first wanted to share information not about grand theories about what *might* work, but rather about a lot of the 'little things' they have been learning about what *doesn't* work, and about how iterating (and iterating, and iterating!) has been key to their ability to learn and make changes to their approach to methodically improve what they are doing. Things like:

Sounds simple, you might say, to which I would say: you are exactly right. 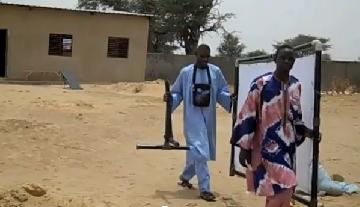 Now, it is not my place or intention to do so here to 'endorse' the work of any particular organization (I'll note parenthetically that World Bank has not supported this particular project in the past -- although USAID has).

Rather, it is to highlight an approach which begins by working in the most challenging environments and not simply taking a model that worked successfully in Paris or Pretoria and assuming that, with some small modifications here and there, it will work everywhere. That's common sense, you might say, and I would certainly agree. But, if the parade of groups who (seek to) pass through our offices here at the World Bank demo'ing their wares are any indication, and the many stalled projects I visit around the world are in any way representative, too often 'common sense solutions' are discarded in favor of what's 'new and exciting'. While funding what's new and exciting may be fashionable for donors (should I be surprised that every other project proposal I seem to come across these days seems to include the use of mobile phones in some way?), in the end that it is usually the most practical solutions that find traction with teachers and students over time.

Note: The image used at the top of this blog post ("interacting with a whiteboard (in front of a blackboard) in Senegal") comes courtesy of Cybersmart Africa.  The second image ("moving a low-cost interactive whiteboard -- over rocks and sand -- between classrooms") is taken from a screen capture of the ‘Snapshot – Cybersmart Africa’ video on YouTube.  Both are used with permission of the rights holder.

(... And so the World Bank EduTech blog resumes its regular publishing schedule. Thanks to all of the people who have written in over the past months asking when the blog would be active again -- here's your answer.)

Are you aware of the Open University's TESSA project?
I'm sure you are, but it's still one of the best examples of technology-enhanced learning, now operating in (I think) 9 sub-Saharan African countries, and developing real sustainability.
That programme began with a successful pilot project (Digital Enhancement in Education Project) in Fort Hare in the Eastern Cape. See here:
http://www.tessaafrica.net/

I've talked with the CyberSmart team too and came away impressed. I like how their approach easily builds on the $15 teacher laptop/projector model: http://ow.ly/73oz8