When students are in charge of maintaining the computers in schools 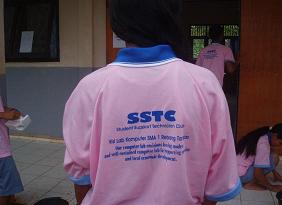 How do you keep computers in schools in working order? Basic technical maintenance is a perennial challenge for many schools in developing countries.  The phenomenon of unused -- and unusable! -- computers in schools is all too well known to anyone who works in the field.  While it is a bit of an exaggeration to label this a 'tragedy', few could argue that this isn't a very unfortunate situation -- especially given the high costs associated with acquiring and installing such equipment, to say nothing of the learning opportunities lost when students and teachers are unable to use expensive equipment that is already paid for.

What to do about this? I regularly encounter a number of common answers to this question.

Visiting rural schools in Russia a few weeks ago, for example, I heard headmasters ask repeatedly for government assistance to finance a computer engineer to be assigned full time to their school to ensure that the computing equipment is well maintained. This is one approach to sustaining school computer labs that tends to work pretty well, although it can be rather expensive (often, I find, prohibitively so).

Another approach was explained to me by a headmaster in a rural school in Eritrea, who said he kept the computers locked in his office to ensure that they did not 'break'. (I checked them out and, sure enough, all appeared to be in great shape!)

The longer computers are used systematically in school systems, there appears to be a higher likelihood that challenges related to technical support will result in more training for users and admin staff, as well as the mandated introduction of various complementary practices and procedures (e.g. filtering access to sites that may contain malware, banning use of USB drives, regularly checking to see that anti-virus software is up-to-date, etc.).  Depending on how well these sorts of things are done, these sorts of activities achieve varying degrees of success.

Some schools and school systems have learned over time to standardize their equipment purchases where possible to reduce the complexity of maintaining different types of equipment.  This sometimes include a vow to limit or, in some cases, even ban the use of donated computer equipment, in the belief that such equipment is more prone to break and thus require more maintenance or replacement.

(These approaches are not mutually exclusive, of course.)

One approach that is not well known, but which perhaps should be, is to have students assume primary responsibility for the technical maintenance of a school's computer-related infrastructure.

A recent presentation and discussion at the World Bank by AED's Eric Rusten and Josh Woodard explored lessons from schools in Macedonia and Indonesia (Sumatra) that have been doing just this. With support from Cisco and Qualcomm's Wireless reach program, AED recently published a very useful Computer System Sustainability Toolkit, which Eric and Josh described in depth.

Side note: These sorts of arrangements have been around for a long time in some schools in a sort of ad hoc way, and I see examples of this sort of thing in a variety of contexts all around the world. That said, I find that such arrangements are often the result of an enterprising teacher or student in a given school, with the example often not shared with or seized upon by neighboring schools.  A few groups have sought to systematize the processes for this and have been successful in replicating some models across a number of schools. In the United States, for example, notable initiatives in this regard include GenYES and the New York City-based MOUSE program (which was profiled in the USA's new National Educational Technology Plan as an example of 'Using Students as Technical Resources'). This was also one component of a World Bank-funded program a decade or so ago that explored the use of school-based telecenters.

Why consider such an arrangement? Typically, the first reason this is considered is to cut costs: 'We won't have to pay students, and computer technicians are expensive.'  Indeed -- and especially in many developing countries -- schools often find that they can't afford to retain staff with IT skills, that replacement staff often lack the ability to manage computer systems, and that systematic training programs to help overcome the related challenges are often insufficient.  The result? School computer labs degrade over time, and sometimes become simply unusable.

The immediate cost savings associated with having students perform 'tier one' technical support in schools may not be the only reason to consider something like this, however.

Based on its work in Macedonia and Indonesia, the AED team sees the creation of student support technican clubs (SSTCs) as a useful 'first line of defense', a way to help school computer labs become 'self-sustaining' (through a variety of revenue generation, or at least cost recovery, activities) while at the same time helping to instill in students a greater sense of confidence in their own abilities. In many developing countries, computers are very expensive investments for schools -- especially in rural areas -- and, by trusting students with their upkeep, schools are sending a message of sorts to students that they can be trusted with such important responsibilities. At the same time, students develop sets of skills that are believed to be quite relevant to the world of work.

SSTCs were introduced in 12 schools in Macedonia as part of the USAID-supported USAID Primary Education Project, through a very small grant from Microsoft.  (See mk connects: Macedonia Links Education and Connectivity for an overview of this project; note that link is to a PDF document).  From its small beginning, the program has now spread virally to 340 schools across the country (about 90% of all schools in Macedonia), based largely in the early stages on local demand and informal relationships between schools.  Lesson from this experience were then brought to the Indonesian island of Sumatra, where a small six-school pilot project has been underway.

One of the mandates of the SSTCs is that 50% of club member are girls.  According to the AED team, in Macedonia this has resulted a few years on in a situation where 90% of elected SSTC officers, and 70% of SSTC members, are girls, challenging the belief of some that computer technical support is only 'for boys'.

Over time, a number of tools and structures have developed in Macedonia to support the work of the SSTCs, including an online FAQ for members, a popular technicians' blog, and official recognition from the Ministry of Education formally acknowledging the skills of SSTC members.  The MOE has now assumed responsibility for the SSTC activity, embedding it within its formal institutional structure.

SSTCs can be about more about just keeping school computers running. Some clubs help support teachers in various ways -- this is an especially relevant activity in many places, given that teacher laptop ownership programs and schemes are increasingly popular around the world. They can also be used as a way to promote entrepreneurship preparation programs, with fee-based SSTC services marketed to local communities.

Based on its experience in rural Sumatra, AED sees SSTCs as a potentially useful tool to help change the dynamic between schools and the communities in which they operate.  Whether or not this is the case, the Computer System Sustainability Toolkit -- designed to support the development of SSTCs -- full of useful sample and blank worksheets, templates, planning calendars, discussion guides, usage surveys, announcements, etc. that school-based clubs can learn from and adapt in support of their own particular goals.

A particularly interesting anecdote shared in the discussion at the event was the role of SSTC members as 'truth testers' of sorts when vendors need to be called in to deal with more complicated technical issues.  This can help prevent a situation where vendors attempt to 'upsell' schools on services that they may not need (much like an auto mechanic may try to convince an unknowing car owner that he needs a whole bunch of expensive 'extras').  At the same time, by watching closely and learning from what the vendor does, perhaps the next time something happens SSTC members will be able to handle the problem themselves.

One very useful practice that has been explored successfully in the Sumatra pilot is the creation and use story-based instructional videos by SSTCs for SSTCs. One video example shown documented the selection process for members of a school's club, which was shared via DVD as a way to demonstrate to other schools how they might want to consider doing something similar. (We'll post links to some of these videos once we have them, in the comments section below and, at a later date, in a separate blog post on examples of the use of cheap videocameras in education.)

The introduction of things like student support technicians clubs is a not a silver bullet solution to the challenge of school computer maintenance.  That said, based on the emerging experiences in Macedonia, Indonesia and elsewhere, it is an option that many countries would do well to consider.

Note: The image of SSTC member at a school in rural Indonesia ("how may I be of service?") used at the topc of this blog post comes from the Computer System Sustainability Toolkit. It is (c) 2010 by AED, used with permission of AED.

I work in Technology for Academia, and my company provides tech support (and many other services) to many schools.

Part of the arrangement, when possible, is to use student service techs for the tier-one responsibilities in the school's help desk. Obviously some students are more effective than others, but we are thrilled with the contributions of many of the students.

In the summer, especially when we have large roll-outs of new servers, computers, etc... we will often pay one or two students or recent graduates to work with us full-time in the school.

It's not always easy, but it's an excellent learning opportunity for the students (as well as for our own staff!) and in general it's a win-win.

Intersting topic on the generally ignored, poorly understood but the most burning problem of school computer labs. i m part of it and can understand but unfortunately in a country like india at school level such things are not given due importance