Deepening connectivity and economic linkages between India and Bangladesh will be critical for the success of India’s ‘Act East’ policy.

Here are five priority areas that have the potential to change the economy of Northeast India:

After 1947, Northeast (NE) India has had to access the rest of India largely via the “Chicken’s Neck” near Siliguri, greatly increasing travel times. Traders travel 1600 km from Agartala (Tripura) to Kolkata (West Bengal) via Siliguri to access Kolkata port. Instead, they can travel less than 600 kms to reach the same destination via Bangladesh, or even better, travel only 200 km to access the nearby port of Chittagong in Bangladesh.

This is set to change as close cooperation between Bangladesh and India (including various ongoing initiatives such as the transshipment of Indian goods through Bangladesh’s Ashuganj port to Northeast India, expanding of rail links within Northeast India and between the two countries, the BBIN Motor Vehicles Agreement) can dramatically reduce the cost of transport between Northeast India and the rest of India.

The resultant decline in prices of goods and services can have a strong impact on consumer welfare and poverty reduction in the Northeast. Such cooperation also opens up several additional possibilities of linking India with ASEAN via Myanmar.

Moving forward, expanding direct connectivity between NE India and the rest of India via Bangladesh, while giving Bangladesh similar access to Nepal and Bhutan via India, is critical.

Broadband connectivity of 10 gbps is now being provided from Bangladesh’s Cox’s Bazar to Tripura and beyond, to help improve the speed and reliability of internet access in NE India. Bangladesh has the capacity to provide more.

Trade relations have been gathering strength, going up from $1 billion in 2002, to over $6 billion now (see chart). Since 2011, with India providing duty free treatment to all Bangladeshi products (save 25 “sin” products - alcohol, arms, etc.), India’s (dollar value) imports from Bangladesh grew an average of 6 percent per year over 2012-16, even as its imports from the world dropped by 8 percent per year. For NE India, Bangladesh is potentially its most important economic partner, given the latter’s size and location.

However, the potential of this NE India-Bangladesh relationship has barely begun to be tapped. For example, agricultural products, where NE India has a strong advantage can feed into Bangladesh’s vibrant food processing industry, while NE India can provide a market for its processed foods. Reducing perceived and real non-tariff barriers and promoting efficient customs procedures and border facilities remain key to reducing the time and cost of trading across the two borders, thereby further expanding trade between the two countries. 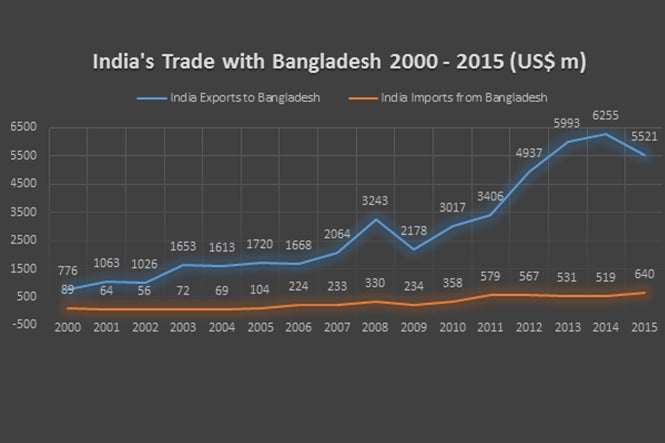 At a national level, India is a growing investor in Bangladesh, and now has land earmarked for development of special “Indian economic zones” in Bangladesh. At the sub-national level, however, it is Bangladeshi companies which could become some of the key investors in NE India- a process that has just scratched the surface so far. Better investment and trade linkages can also help deepen regional value chains and help both Bangladesh and Northeast India access other Asian markets.

India already exports 600 MW of power (including 100 MW from Tripura) to Bangladesh, and much more is in the offing. Bangladesh would be the “power corridor” for transmission of hydro energy from Arunachal Pradesh to the rest of India. In the future, this energy trade could well link up with potential hydropower exports from Bhutan and Nepal to form a BBIN (Bangladesh, Bhutan, India and Nepal) power market.

The India-Bangladesh economic relationship has the potential to change the economy of Northeast India, and advance India’s Act East vision. In addition, the continued and growing momentum in the bilateral relationship offers a tantalizing glimpse of the possibilities of One South Asia.

Better late than never. Economic cooperation, transport cooperation, would reduce poverty thereby help reduce frustrations among unemployed Youth of NEI's; which eventually reduces risk of extremism. Bangladesh entrepreneurs/Investors should be allowed and encouraged to invest in the NEI's as a mark of goodwill to bring trust among Bangladesh People.

India suffers from poor perception of maximizing her interest both political & economic at the expense of her smaller but helpful neighbor, Bangladesh. Delhi demands Bangladesh's foreign & economic policy must conform to her line . Para tariff barriers put up by India discourage Bangladesh exports to India. The index chart is am example. Poverty remains unless India broaden her narrow outlook.

India should broaden up their mind in case of cooperation. Otherwise will move to others.

Non tariff barriers on potentially export viable goods/products should be eased by indian authority, so that trade get balance. In contrary, sustainable trade relation would not be realized between these countries.