Bangladesh – The Most Climate Vulnerable Country 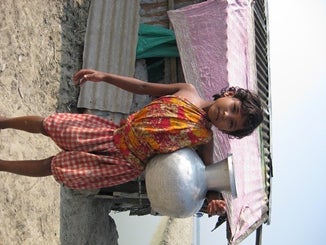 On a Path Towards Climate Resilience

Two recent key reports ­– The Intergovernmental Panel on Climate Change's ‘Fifth Assessment Report' and World Bank’s ‘Turn Down the Heat’ – reveal long-term implications for Bangladesh and its people from probable catastrophic impacts of climate change. Both paint a very dismal scenario of the future as climate change continues to take its toll. The earth faces a temperature rise of at least 2 degrees Celsius above pre-industrial levels requiring firm and coordinated action to benefit all countries.

This was not the only bad news. The recently released sixth annual Climate Change Vulnerability Index, (Maplecroft) revealed that Bangladesh would feel the economic impacts of climate change most intensely and that our capital Dhaka would be one of the five most climate vulnerable cities in the world.

Having seen the impacts of climate change in our lifetime across agro-climactic zones in Bangladesh, our Government had prudently initiated a series of policies and actions for a climate resilient economy. The strategy is simple – to make livelihoods of the poorest/vulnerable populations climate resilient, so that the national economy is insulated from climate change and becomes a foundation to vigorously pursue sustainable development.

Our national guiding policy included deliberations and consultations between communities across agro-climactic zones; academic experts and climate practitioners; multi- and bi-lateral development partners; small community-based organizations, national/international NGOs; and local governments and national entities. The outcome of these deliberations –‘Bangladesh Climate Change Strategy and Action Plan (BCCSAP), 2009’ – includes a ten-year program to build country capacity and resilience to meet climate change challenges over the next few decades. It also provides an action plan for integrating climate change issues into sustainable development. Like the Sendai Dialogue, which attempts to mainstream disaster risk management in the planning process, the Planning Ministry of Bangladesh has integrated poverty-environment-climatic linkages in the national planning process, documents and guidelines. This underscores the seriousness of the Government in taking a comprehensive approach in tackling the climate change as it affects the poor in Bangladesh. Bangladesh is the first country to have developed such a detailed climate resilience program.

However, putting BCCSAP into practice necessitated two key factors – strengthened institutions with adequate human resources, and adequate funds. For this, a Bangladesh Climate Change Resilience Fund (BCCRF) was established in May 2010, with a total pledge of US$ 190 million grant (as of today) and financial support from the European Union and the governments of Australia, Denmark, Sweden, Switzerland, the UK and USA. Administered through the World Bank, the BCCRF has a robust two-tier governance system – Governing Council for overall strategic direction and guidance to the BCCRF, and Management Committee for its working.  A BCCRF Secretariat is now being established with World Bank support in the Ministry of Environment and Forests to strengthen the institution with adequate human resources. It will be tasked to select projects, mobilize resources from development partners and work as a front office of the Government in handling the evolving climate change issues.

Climate resilience may apparently appear imprecise and confusing. We are changing that through outreach and a people-centric approach. BCCRF is expected to reach several million beneficiaries and its impact is already being felt in several key sectors. This is made possible by its innovative and transparent climate finance mechanism, as well as unique engagement of civil society receiving an agreed ratio of the total grant/financing through a dedicated funding window. BCCRF’s approach encompasses poor and remote communities and diversified implementation through several government agencies and civil society organizations across multiple climate vulnerable sectors. The funds are used to support projects using solar energy for irrigation, constructing multi-purpose cyclone shelters in disaster-prone areas serving as primary schools round the year and as shelters in times of disaster. Projects linked to allaying climate change have been financed to enhancing green forest cover, promoting climate-resilient agriculture, expanding food security via public silos, and through socio-economic empowerment of climate vulnerable communities. It aims to support over 30 NGOs to develop innovative community-based adaptation solutions for making the lives of the poor more climate resilient.

Our Government has been allocating, year on year, huge resources to build an endowment fund to support small climate change adaptation initiatives in research of saline-resistant crop, seeds involving shorter harvest cycle and adaptation of livelihoods, including migration of people displaced due to climate change. Bangladesh Climate Change Trust Fund, as it is called, received in three successive years’ allocations of US$100 million each year from its exchequer through its national budget. Despite the initiatives, the three studies point out, Bangladesh remains vulnerable and its people will face severe economic hardships from climate change impacts in the coming years.

Bangladesh will need additional funds as grants and soft loans, to further strengthen a climate resilient and low-carbon economy. We have a national policy framework BCCSAP and a National Adaptation Plan of Action (NAPA) that prioritize adaptation and we are continuously improving our institutional mechanisms. What we lack is adequate and sustainable flow of resources to meet the demands of our climate vulnerable communities.

Are there any committed and interested long-term partners out there willing to join us in our efforts?