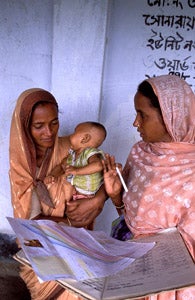 Bangladesh was born on December 16 1971, following a devastating war that cost the lives of 3,000,000 people. They were victorious in their fight for independence, yet the prospects of the Bangladeshi people living in the 70’s were disheartening, earning it the now rather infamous connotation of a basket case, as Henry Kissinger called it back in 1971. Emerging from the rubbles left by the war, the resilient Bangladeshis began the rebuilding of their newly established nation. Economic growth was slow to take off, and it rebounded to the pre-war level about twenty years later, in the 90’s. Yet, it was after the 90’s that the country began to attain palpable progress and only over the 2000-2010 decade that the country achieved great poverty reduction. The depth-of-poverty MDG target of 8 percent was attained five years ahead of schedule, and Bangladesh was set in the right path for achieving the first MDG goal of halving the poverty headcount to 28.5 percent by 2015.

Many factors contributed to the observed progress, rising rural wages, microfinance lending, remittances, and the expansion of safety nets, yet the  importance of the enduring demographic transformation as one of the major drivers of poverty reduction must be underscored. This demographic transformation was characterized by a rapidly declining dependency ratio (a decrease in the number of dependents, and in Bangladesh’s case young children in particular) resulting from an aggressive, supply-driven national family planning program that was put in place in the 70s. Though the primary goal of the family planning program was to reduce the pace of population growth, it turned out to be a major factor in the overall improvement in maternal and child health, and resulted in significant increases in per-capita consumption, thus having very positive spillovers on many fronts.

As the country continues to move forward, policy makers need to pay close attention to the challenges and opportunities attendant to the ongoing demographic changes. On the one hand, high dependency rates remain positively associated with poverty, suggesting that family planning programs should now be refocused on the less well off as well as on delaying early marriage. On the other hand, if Bangladesh is to reap its demographic dividend, it will need to both accommodate the human capital and employment needs of the swelling youth cohorts in the coming years and begin preparations for aging out of the demographic dividend.

Bangladesh has really come a long way since its independence, and not just by chance, but rather thanks to policies with long-term goals, like the national family planning program, and the resilience of its people.