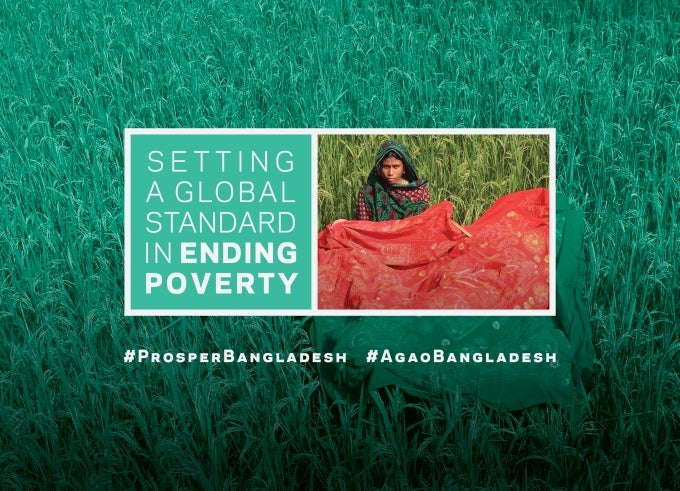 There is a lot for Bangladesh to celebrate in the latest World Bank research on global poverty and inequality.
The new report, entitled “Poverty and Shared Prosperity 2016: Taking on Inequality”, uses revised data to give a more accurate estimate of how many poor people live in Bangladesh. What the report shows is that 18.5 percent of the population was poor in 2010 compared with 44.2 percent in 1991.

This is a major achievement that will receive global recognition on October 17 when the World Bank Group marks End Poverty Day with the Bangladesh people at an event in Dhaka.

This achievement means that 20.5 million Bangladeshis escaped from poverty between 1991 and 2010 . It means that Bangladesh beat the deadline by an impressive five years in achieving Millennium Development Goal number 1, an internationally recognized target to cut extreme poverty rates by half by 2015.

It is worth remembering how far Bangladesh has come.

U.S presidential security adviser Henry Kissinger dubbed the country a "basket case" at its birth in 1971. Bangladesh emerged from the ashes of a gory War of Independence as the world’s second poorest nation. Its population and economy were ravaged and its productive assets -- which once provided the bulk of undivided Pakistan’s exports -- were in shambles. Even as well-meaning experts sounded warnings that the fragile state would collapse, Bangladesh increasingly silenced the sceptics by proving resilient against the devastating 1974 famine and a series of crippling cyclones. From 2000 onwards, the economy has been growing consistently at 6 percent a year on average. Development officials from other nations now visit Bangladesh to decipher the secrets of its success.

Bangladesh has tackled its challenges in remarkable ways. It has overcome meagre resources to make the most of its strong cultural and intellectual tradition and a national will to build a prosperous nation following Independence.
Bangladesh gave the world a revolutionary new micro-financing model to monetize the productivity of the poor and showed that a predominantly Muslim country could unleash the potential of its women, making them a significant partner in progress. Its Female Stipends program, widely acclaimed as a model for achieving gender parity of enrolment, has been replicated successfully in several countries. Its vibrant garment sector is giving a whole generation of women jobs that open new opportunities. 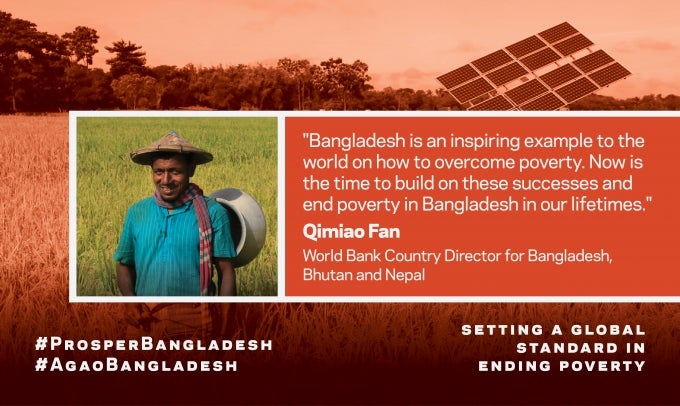 The sceptics will say that poverty, regardless of the latest World Bank estimates, is a reality in the lives of too many Bangladeshis. They are right.  Bangladesh still had 28 million poor in 2010, the latest year for which a household survey is available for the country. Based on the new estimate, Bangladesh is the 64th poorest out of the 154 countries included in the World Bank’s global poverty database. Much more therefore still needs to be done to end poverty in Bangladesh and to increase the prosperity of the bottom 40 percent of the population. These are the goals that the World Bank Group is pursuing with the Government of Bangladesh.
As the government has rightly identified, Bangladesh will do well by addressing infrastructure, energy and regulatory bottlenecks to increase productivity, make exports more competitive and attract more domestic as well as foreign investment.

The country can build on its success in human development and improve the quality of education, vocational training, as well as child nutrition and health services. The country can do more to strengthen institutions, including improving governance and strengthening anti-corruption measures.  It can improve the policy environment for businesses, manage rapid urbanization and adapt to climate change impacts.

The World Bank Group will work with the people of Bangladesh to overcome these challenges every step of the way. The World Bank has invested more than $24.3 billion in support since 1972 to advance Bangladesh’s development priorities . Bangladesh is currently the biggest recipient of credits from the International Development Association, the World Bank’s fund for the poorest countries.

There is much to be done to complete Bangladesh’s development journey and to give all its citizens the opportunities they deserve. But as the World Bank’s new report shows, Bangladesh is an inspiring example to the world on how to overcome poverty. Now is the time to build on these successes and end poverty in Bangladesh in our lifetime. Bangladesh's progress is definitely commendable considering much of it has been ruled by autocratic governments and the military, however, if infrastructure development is focused outside of the capital city and decentralisation is not given top priority by the government then we'll be chasing our own tails for a long time before any major breakthroughs.

First of all since political government came into power Bangladesh moving forward, due to government’s economy policy that helps to create favorable working condition for private enterprise to grow, and boosting export goods and export labors in international markets therefore remittances increased, international aid and development, negotiation with countries for quota and tariff assistance and public participation in consumer economy etc. You (Mr. Rasheed) cannot isolate/disregard of responsibilities of government for any failure or achievement in country. The secret is simple Government of Bangladesh and its people.

This despite decades losing avg 3% growth pa to bad government. The secret is simple, private enterprise and worker remittances. Not aid, not development, not government (except in health). Quota and tariff assistance from the West also helped.

Bangladesh have to involve with international online payment gateway (PayPal)by do this we will be able to export our web intelligence (freelancing)and capable to earn foreign currency .

Really, it's very important for us.

In fact, the point is, when the government came to power, they are becoming the general public instead of his party's supporters over the government. Some of wicked people are few and administrative mismanagement due to lower middle-income countries, Bangladesh today! I hope that this crisis will soon become a high-middle-income countries, Bangladesh.