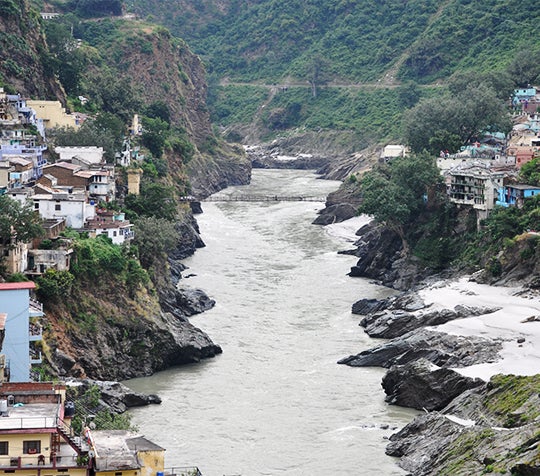 I went to bed early that night in Rudrprayag. The trip had worn me out and we were not even halfway up the Alaknanda Valley. Still, sleep would not come. The air conditioning made too much noise. When I got up to switch it off, the noise stayed. I suddenly realized how close we were to the river….

Ten days later nobody would have thought the river’s noise was an air conditioning unit. The river became a monster that obliterated everything in its way. Many hotels like mine were simply swept aside, as were people, roads, bridges, houses, and much more. They call it the Himalayan Tsunami. There was a cloudburst, causing a lake to burst, triggering a series of events that led to terrible destruction and loss of life.

Yesterday I was at a book launch when someone introduced himself to me. He was from Nepal and we shared thoughts of both having travelled to the Alaknanda Valley, where some roads really look like they are little lines on a gigantic rock slide. “It used to happen every 25, maybe 35 years.” he said “it is called a Himalayan Cloudburst. But it looks like it will now be much more frequent.” He is a well-known expert on water issues in the Himalayas.

As many know, not long after the Uttarakhand disaster, India was again struck by a disaster, this time a cyclone by the name of Phailin. There, the result was very different: far fewer lives were lost, thanks to an incredible evacuation effort led by the government of Odisha. This happened after years of working on disaster preparedness with the National Disaster Management Authority supported by the World Bank and the UN.

Our World Bank team, together with the Asian Development Bank and the Ministry of Finance, have now engaged to help the government of Uttarakhand with its recovery and reconstruction. Like in Odisha after the 1999 cyclone, we should not just rebuild what was there. We should help build systems for early detection and response. We will also help rebuild houses, public buildings and small roads and bridges, as well as bridle paths. The government of Uttarakhand insists that we should make sure that what we rebuild is located in the safest place possible and built in a way that supports the fragile environment as much as possible. The motto of the project is “build back better”.

We know this will not be the last disaster to strike. That is not the question. The question is whether we can make sure it hurts less next time. Odisha has shown us that this is possible. Thanks for sharing this inspiring story.

Build back better is a great initiative.We should ensure that next time when anything like this occurs,damage is less and state authorities are better prepared to handle such a event.