Agribusiness can help drive prosperity in Sri Lanka  – and we know just the entrepreneurs to do it. Over the last few months, we have seen over 1000 proposals come pouring in for consideration under the matching grants scheme (MGS) for agribusiness.  Today, the Government will sign the grant documents with the first entrepreneurs to make the cut. 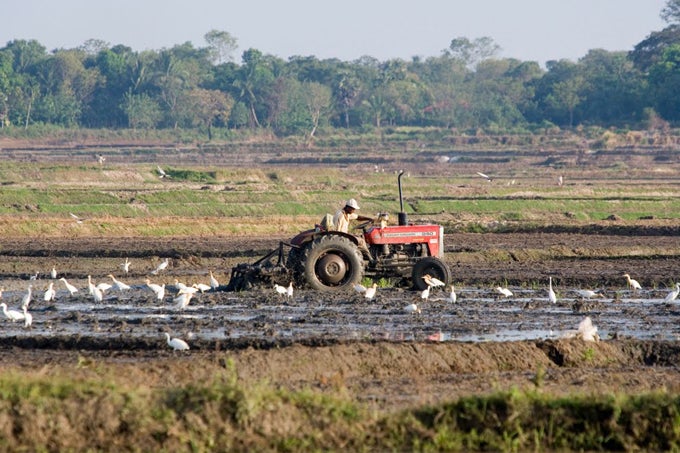 The goal is to increase their competiveness, business orientation and market position in order to make them more attractive business partners in the value chain. It’s an ambitious task, but Sri Lanka’s agri-entrepreneurs have risen to the challenge.

The matching grants scheme, implemented by Sri Lanka’s Ministry of Primary Industries comes under the Agriculture Sector Modernization Project. Supported by the World Bank, with additional funding from the European Union, the project is implemented through the Ministry of Primary Industries, the Ministry of Agriculture, and five participating provinces including the Northern, Eastern, Central, North-Central and Uva Provinces.

A rigorous and transparent selection process was used to create a shortlist. Successful applicants would be offered up to 50 percent of the investment required through the scheme, matched by their own funds or raised from commercial loans.

These small enterprises need the boost. Today, beside a few major agriculture companies, most operators in Sri Lanka are small-scale cultivators who face problems related to low productivity and lack of diversification, absence of market linkages, non-availability of inputs and limited access to credit facilities. Farmers are not organised and tend to focus on low value crops that limit income generation.

Linking cultivators with entrepreneurs, and helping these fledgling businesses plug into national and global value chains, will bring innovation and new technologies into the sector. Globally, the agribusiness sector is emerging as an important frontier for creating better rural jobs in processing, value addition, high-value food supply chains. Agricultural modernization and agribusiness go hand-in-hand. In fact, the vast majority of jobs (almost 4 out of every 5, on average) in modern and advanced food systems are off-farm – along the agricultural value chains.

In the end, the ultimate beneficiaries of agriculture modernization will be the island’s smallholder farmers. An estimated 1.65 million of them operate on average less than 2 hectares and contribute 80 percent of the total annual food production.

For decades, the holy grail of Sri Lankan agriculture – pursued by successive governments since independence – was self-sufficiency in rice production. However, this meant that the agriculture production structure has remained concentrated in the low value food crops.

Farmers say that part of the challenge lies in the policy environment, which while promoting paddy cultivation provides little incentives for farmers to diversify into higher value crops. In general, the current institutional framework for agriculture is highly fragmented and complex.

Fertilizer subsidies have tended to dominate public sector expenditure, leading to the neglect of other critical functions such as water management or Research and Development (R&D) and extension services, which are critical to generate new technology and productivity improvements. Even then, only 3 percent of total agriculture expenditure has been diverted to the latter, with the limited budget dedicated predominantly to rice research.

Now, Sri Lanka stands at a crossroads. While the share of population employed in agriculture has remained at about 30 percent over the past 10 years, the country has not performed as well as peers like Thailand and Vietnam. Instead, the share of the sector in the national economy has faltered, accounting for only 7.7 percent of GDP in 2017.

In response, the Ministry of Agriculture is currently probing constraints farmers face and has plans to revise the National Agricultural Policy (NAP). By undertaking a rigorous policy analysis, the government of Sri Lanka wants to identify what key policy changes could bolster growth and create sustainable livelihoods in the sector.

The challenges vary based on where you look – Sri Lanka’s amazing agro-ecological diversity means there are enormous regional variations in the availability of water, soil types and even access to infrastructure and markets. From aquaculture initiatives in the north-west coastal zone to horticulture in the southern wet zone, the needs of farmers differ considerably.

Extreme weather events have impacted the country’s productivity. Two thirds of the agricultural area are located in the dry zone, which covers the northern and eastern and south-eastern parts of the country, where the bulk of the country’s irrigation infrastructure is located.

This is why the project rejects a one-size-fits-all approach for one that is anchored in the local context, and listens to local business communities and voices on the ground.

The project hopes to create lasting networks between farmers, helping them to organise themselves and work collaboratively. The project’s commitment to productivity enhancement and diversification is continued under initiatives designed to support smallholder farmers to produce competitive and marketable commodities, improve their ability to respond to market requirements, and move towards increased commercialization.

Designed to be inclusive, it will help farmers - including women and youth who today experience some of the highest rates of unemployment in Sri Lanka - benefit from investments into value addition, new skills and technology improvements, sustainable crop management, and new financing and marketing arrangements.

Multiple studies have noted how growth in agriculture can reduce poverty both directly, by raising farm incomes, and indirectly, through generating employment and reducing food prices. Through a focus on higher value added products, Sri Lanka can boost rural employment, creating more jobs in processing and logistics. Good to know more about agriculture. There is a International conference on Agriculture at Singapore for more creative ideas

Thank you for your post. This is excellent information. It is amazing and wonderful to visit your site.
crop value chain management
ranches accounting services