We rarely give the toilet a second thought. We use it when we need to, and we flush and forget. We are also able to conveniently wash our hands afterwards. But imagine if you are on a long hiking trip or a bus ride with no stops in sight and had no access to a toilet or running water. It’s a situation most people would dread.

In poorer parts of the world, this is the daily reality for many. The humble toilet—perhaps the most important contributor to improved human health in history—is a luxury item which relatively few people enjoy. Without a toilet, the poor have to go in the open, behind bushes, or next to streams. They cannot flush their waste away or wash their hands afterwards if they wanted to. In poorer countries, managing human waste remains a major challenge, and failure to meet that challenge exposes millions of children and adults to waste-borne diseases that can have deadly consequences.

In Nepal, a country of approximately 26 million people, nearly 40% of the population do not have toilets. In parts the Terai or lowland areas, this number climbs to a staggering 75%. To be sure, the Government of Nepal has achieved remarkable progress in improving sanitation coverage in the last two decades. In 1990, only 6% of Nepalis had access to a toilet. By 2011, 62% had access, with the sanitation Millennium Development Goal (MDG) achieved ahead of the 2015 target. However, that achievement still leaves a large population—more than nine million people—without toilets. So the Government decided to aim for a new and more ambitious target—universal access by 2017. And it may get there. 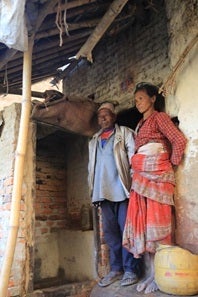 Last month, I visited Nangkhel, a Newari village near Bhaktapur in the eastern corner of the Kathmandu Valley, to see how one village succeeded in bringing the luxury of a toilet to all 181 households (or about 900 people).

There I met Chaturman and Nyuchemaya, an elderly, landless couple and one of the poorest family in Nangkhel.  They weren’t convinced that they needed a toilet. It was too expensive; the bush was free. Besides, there didn’t seem to be any room for a toilet on the tiny plot that their home occupied! But in the end, Chaturman’s friend, his “dai”, formerly the village chairman and still a member of the village’s WASH committee, convinced them that it was not only good for them, but affordable too.

It took only seven days to build the toilet. The village provided the pan and pipe ($15). Chaturman and his wife dug the pit themselves. And their daughter covered the remaining costs needed to buy the bricks ($16) and cement ($26) and to pay the masons to line the pit and build the shelter ($50).

The result was a new toilet in an outhouse on their back porch. A neighbor connected a tap to a gravity-fed piped-water system about 10 feet away, and now elderly friends use the tap and the soap placed next to it to wash.

The elderly couple is clearly proud of their achievement. They used to go near the stream about 200 meters away, but as they aged, they found it increasingly difficult to do so. “I am old, and it is hard to go down to the river. It is far and slippery. But now, even if I get sick,” said Chaturman with a laugh, “I can still crawl to the toilet.”

What Chaturman and Nyuchemaya did was an inspiration to the village. If the poorest household could build a toilet, there was no longer an excuse for any other villager not to build. And build they did! Within a few months, all other households in the village had built their own toilets—with some that even added a sink or shower in an enclosed structure. 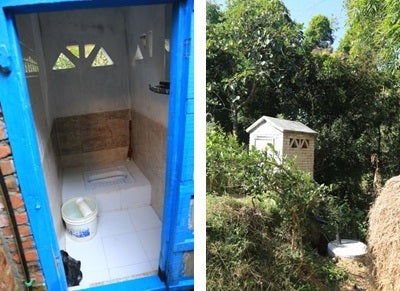 Helping villages like Nangkhel to become “open defecation free”  (ODF) involves partnership. The World Bank helped rural communities to improve their water supply and achieve universal sanitation through the Second Rural Water Supply and Sanitation project, which closed in 2012. The UN supported a similar initiative in another area.

Young volunteer women helped convince villagers of the importance of using an improved toilet.  They focused their campaign on mothers, who quickly learned that containing human excrement reduces sharply the risk of fecal transmission of diseases, including diarrheal disease, a major killer of children.  Preparing food or letting children play next to an open sewer has become a thing of the past.

September 21, 2013 marked an important milestone for all households in Nangkhel and the other villages and municipalities in the district: Bhaktapur was declared ODF. Village by village, city by city, district by district, Nepal aims to be completely ODF by 2017. It is an inspiring example for other countries who want to deliver the same results to their citizens.

All photographs by Donatella Lorch Copyright 2013 Dear Johannes, you have told the story in a way that is both moving and convincing that our efforts as a devt institution bring out the best in the people we serve. I really appreciate that your story clearly showed that the community took the initiative to mobilize interest in self-building their own toilets. The Bank furnished the most critical part which was to provide water supply along with supporting communities to take the lead in helping themselves. This way, the Bank can rest assured that once the sanitation services are fully commissioned, the beneficiaries would be keen on taking care of the source of their water, the water supply infrastructure as well as their toilets.
One dimension that I would like to bring to light is about potentially piloting in Kathmandu, a new technology that converts human waste into fuel briquettes. A small private company called the Waste Recyclers have developed this technology and is piloting it in Ghana and Kenya. It could be a worthwhile consideration for addressing the human waste dilemma in big cities in the region such as Dhaka.
Thank you again for the interesting read!

government should be emforce to look against poor people.

Definitely, Nepal is marching towards Open Defecation Free (ODF) and definitely will achieve soon (10 districts out of 75 so far).
Based on my personal experiences, Motivation with Monitoring is the key tool for making to stop open defecation and start to defecate in Toilet (Safe and Hygienic).
Indeed, to built toilet in mind is very important, which definitely leads to physical toilet (Safe and Hygienic.
Thank you for sharing Nepal's success case.

I read the statement, became happy and sorrow at the same time. I am the resident of Bhaktapur since 20 years.It is good news for me that the district is going to declare ODF. We are also planning to declare as Yoga district in 2015. It will support to achieve many thins including ODF.