Putting Food on the Table 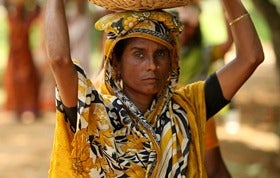 Halima Khatun never had to worry about putting food on the table when her husband was alive. Her husband had a business which provided enough for their four children and they lived fairly contented till seven years ago, when her husband suddenly passed away.

As the years went by, one by one the children married, moved out and had their own family to take care of. Halima was left alone, fending for herself, and took up weaving mats and embroidery to help get by. But then her daughter, who used to work at a garments factory in the city after her divorce, suddenly fell sick and unable to work, she moved back in with her four-year old son. Halima was thrown into utter desperation and knew not how to make ends meet.

Soon after, she heard an announcement at the local market. The government of Bangladesh's safety-net initiative, the Employment Generation Program for the Poorest (EGPP), was offering short-term employment for vulnerable households in extreme poverty. Halima joined the program and was able to keep her family from the brink of disaster with the money earned by building roads running through her community.

Despite substantial progress in the country, like Halima, around 47 million people in Bangladesh still below the international poverty line of $1.25 a day (2010). Even a small natural or economic shock can push these vulnerable families over the edge into extreme poverty. Death, sickness or even a divorce can mean a world of difference in terms of how a family is able to live and get by.

Since the World Bank’s support to the program in 2010, EGPP has provided over 135 million employment days and distributed a total of $285 million in wage income. With only four years in operation, the EGPP has become one of the largest safety net programs in Bangladesh. About a third of the participants in the program are women like Halima.

Five days a week, Halima and her fellow workers from her village in Kapasia dig up soil from nearby land and pile the mud into baskets which they balance on their heads. Over and over again they walk gracefully up and down, tossing the clay onto the strip where the road will be built. It is almost hypnotic to watch the smooth coordination between the workers, but one also realizes how hard the work is, especially under the scorching sun during the summer months.

Every Thursday, Halima gets a day off to go to the bank and withdraw her weekly salary. EGPP has pioneered the practice of providing wages to Bangladeshi manual labourers through banks to ensure that benefits flow to the right households. For the first time in Bangladesh, people like Halima are empowered to open and operate bank accounts, where their salaries are directly deposited, thus minimising the chances of leakage.

With the BDT 175 (approx $2.2) that Halima earns from her job every day, she, her daughter and the grand-son get by. The wages, set slightly below market wage level to attract only those who need the money the most, do not give Halima a luxurious life. But now Halima no longer has to worry about putting food on the table – “It has taken the desperation out of our lives and I no longer have to worry about my grand-child going to bed hungry.”