Seize the Opportunity to make Dhaka a great, vibrant City 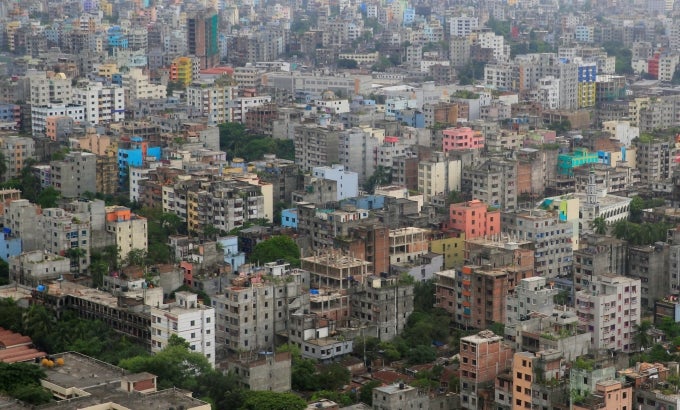 The success of Dhaka, one of the megacities of the world, is critically important for the economic and social development of Bangladesh. The city's astonishing growth, from a population of 3 million in 1980 to 18 million  today, represents the promise and dreams of a better life: the hard work and sacrifices made by all residents to seize  opportunities to lift themselves from poverty towards greater prosperity.

However, as Dhaka has grown to become one of the most densely populated cities in the world, its expansion has  been messy and uneven . Dhaka's growth has taken place without adequate planning, resulting in a city with extreme  congestion, poor liveability, and vulnerability to floods and earthquakes. Many residents, including the 3.5 million  people living in informal settlements, often lack access to basic services, infrastructure, and amenities.

Unplanned and uncontrolled growth has created unprecedented congestion: the average driving speed has dropped  from 21km per hour 10 years ago to less than 7km per hour today. Continuing on current trends would result in a  further slowdown to 4km an hour — slower than the average walking speed!  Congestion eats up 3.2 million working hours each day and costs the economy billions of dollars every year. Some of the most important economic benefits    from urbanisation are missed out due to this messiness, resulting in lower incomes for the city and the country.

These problems will not go away on their own. Dhaka's population is expected to double once again by 2035, to 35  million. Without a fundamental re-think requiring substantial planning, coordination, investments, and action, Dhaka  will never be able to deliver its full potential. Dhaka is at a crossroads in defining its future and destiny.

Up to now, urban growth has mainly taken place in the northern part of Dhaka and expanded westward after the  flood of 1988, when the government built the western embankment for flood protection. This resulted in high-density  investments near the city centre, where infrastructure and social services were accessible. However, real estate investments were not coordinated with other infrastructure and transportation services.

A similar process is taking place eastward of Dhaka despite the absence of an embankment to protect it from flooding. If properly managed, the development potential of East Dhaka is massive, as it is mainly a rural area with parts that are within the walking distance of the city's most prosperous neighbourhoods. A well-planned East Dhaka could boost productivity and liveability, while helping relieve congestion in the rest of the city ; but with a business-as-usual approach, doubling the size of Dhaka could amount to little more than doubling the current messiness.

For Bangladesh to become a middle income country by its 50th birthday, a lot depends on the success of Dhaka's urban expansion. Based on the current path, East Dhaka runs the risk of facing the same low productivity and high congestion as the rest of the city, with greater vulnerability to floods and earthquakes. Retrofitting infrastructure in the current, dense and congested Dhaka is much more difficult and costlier than planning and building towards the East, with the future in mind. However, this needs to be done quickly, before East Dhaka densifies too. The time to act is now.

Today, ministries and agencies responsible for Dhaka's development and experts from around the world gather for the “Dhaka Toward 2035” conference to share global experience in managing urban development while presenting scenarios and options for Dhaka's future. Rigorous simulations of the city's development will be discussed, and the experience of other major developing country cities that achieved a radical turnaround will be reviewed.

For example, Shanghai's population growth from 6 million to over 24 million has been accompanied by improved access to services, economic activity, liveability, and mobility through greater transportation services. Much of this success has been due to its strategic approach to the development of East Shanghai (Pudong), and its integration with the rest of the city. The Pudong “miracle” transformed Shanghai into a global city in just 25 years. The experience of Shanghai and other cities shows that success requires a clear vision—one that is embraced by government agencies, private investors, citizens and development organisations, and supported by careful planning and tight implementation.

Leading up to a forthcoming report, to be released this fall, the conference presents four scenarios for Dhaka's future depending on the actions that it takes today, through decisions such as completing an embankment in East Dhaka, investing in transportation, and managing and enforcing planning and zoning laws. The simulation results show what a big difference a strategic approach to Dhaka's urban development would make. The opportunity to create a bright future for Dhaka, as a vibrant and liveable city, must be seized now before it is too late. Dear Qimiao Fan,
1) Thanks for your blog on concern of Dhaka to make it great city and I salute for this effort.
2) To achieve the goal being set for 2035 need to be worked very objectively with very small small targets .Per history of Bangladesh up to date Bigger projects and long term plan becomes victim of "Elite Capture " and blame goes to "Corruption" .
3) Erratic and unplanned blasting growth of Dhaka is the report card of failure at rural front.
4)Dhaka's population growth is directly proportionate to poverty of villages in Rural Bangladesh.
5) Per my observation ,behavior and warmth of 2 Dhakai depends on the origin of rural areas they come from. The low cost solution of making "Dhaka a great -Vibrant City " exists in this social phenomenon of rural area affinity.
6) One of the out of box possible solution for Dhaka is : Make 200 clusters in Dhaka and hand over the cluster development to each Corporate status developed NJCS in next 2 years .
7) One more possible solution: Break Dhaka Head offices of organisation like Social Development Foundation (SDF) into 3 Head Offices i) Barisal Head office ii) Rangpur Head office iii) Jamalpur Head Office and all the Head offices Corporate Social Responsibility is to insure that they take care of there part in Dhaka through their NJCS . This arrangement and concept can make wonder in City Development which may be unique of its kind.
8) My suggestion may help your concern and even serve SDG .
Await your acknowledgement and comment .
Regards
Mahina Arefin

Decentralization of governance, administrative services, health facilities, financial services and opportunities creation at moffusil level is only the choice to combat such man made problems. The urban migration can be controlled by imposing stringent measures as well as giving incentive to those who choses not to migrate or serve at center. United Nations should introduce convention on decentralization.

Dear Bhuwan Adhikari and Qimiao Fan ,
1) I agree that decentralization is one of the possible solution to improve life of people in Dhaka.
2) If conventional method of improving infrastructure the all will be go in hands of "Elite" per so many past expereince.
3) Even money for decentralization efforts may go under "Elite Capture" per past history.
4) I suggest that link it with rural development and hand over cluster to each rural unit and wonder will come .
5) Await your out of box input in this respect .
Regards
Mahina Arefin

Government should send prominent scientists to study about the history of shangai,s development or any other cities which had similar conditions before but finally made a vibrant city

We should also focus and emphasis to promote the increase the rural economic opportunity which will led to reduce the domestic migrants pressure from various aspect in Dhaka City along with other city.
One more point i would like to mention that there will be very tough to get easy example is decentralised was happend in a smooth way but it seems to me if we can create and develop the rural economy and more opportunity it will be helpful to decentralisation.

A well planned and managed public transport both over and under ground would reduce the number of vehicles on the road. A bipartisan transport overhaul plan is needed. We will also need an objective decentralisation plan urgently. We need to clean and revive the waterways around the city. You need to have healthy space in around the city and the waterways can provide that space.