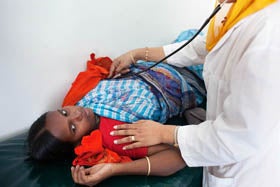 We will not make any serious inroads to reduce incidence unless we address poverty, crowding and stigma.

Tuberculosis (TB) remains a social disease and a syndrome of poverty. The epidemic has evolved and so has its treatment, yet TB mortality cases are reported to almost two million people around different pockets of the world. It was a standard epidemic since antiquity and continues to infect at least nine million new individuals in the first decade of the 21st century.

Historically, TB has been one of the major causes of mortality worldwide and as recently as 2009 claimed approximately 1.7 million lives globally. Approximately 11-13 percent of these individuals are also HIV positive and of these, almost 80 percent reside in the African continent. However, incidence rates are falling globally very slowly in five of WHO’s (World Health Organization) highlighted regions. The exception to this is the South and South East Asia belt where the incidence is stable. These facts demonstrate that the race is being won in some quarters but the finishing line is still a mere dot in the horizon.

The mycobacterium tuberculosis has an unusual cell structure and wall composition. Prolonged and regulated adherence to antibiotic treatment is necessary in its treatment. The concept of sanatoriums, that of in-house management of TB patients first arose in the late 19th century. The rationale behind them was that they isolated contagious patients, provided them with an environment that rebooted their immune system whilst concurrent medical treatment was instigated. The foundation for TB management for most of the 20th century went in conjunction with scientific developments such as advancement in radiological studies, microscopic studies of sputum and understanding of the role of anti-tuberculosis drugs. The Bacille Calmette Guerin (BCG) vaccine was first used in 1921. However, the efficacy of the vaccine is only 80 percent over approximately 15 years; it only protects babies from serious complications. There still does not exist a vaccine that protects people from getting infected.

The treatment of TB has become more proficient with the WHO DOTs program (Directly Observed Short Course Therapy). DOTS has been a revolution in its own right whereby it has mobilized the treatment of TB in poor corners of the world in a timely and successful manner. DOTS has become the universal standard treatment method for the vulnerable and disadvantaged members of society in developed and developing countries. This allows for ease of follow-up and regular monitoring of the five-course drug intake. In essence, public health workers go home to home and supervise the administration of medicines, eradicating the need for continued isolation of patients. This has an economic advantage for poor families. Isolating the breadwinner of the house for nine months could have dire consequences for an entire family. Engagement with the DOTS program allows for individuals to continue working after the infectious period is over. Furthermore, DOTS is highly cost effective, costing only US $3 - $7 for every healthy year of life gained. Meanwhile, richer members of society pay for anti-tuberculosis medication on an out-patient basis. DOTs covers 94 percent of the world’s population but success of treatment is still 70 percent. Malnutrition and smoking exacerbates this failure.

TB treatment has also grown in its complexity. The evolution of modern health problems such as HIV has further intensified the struggle against TB. Those who are identified, as HIV positive should be enrolled into specialist TB/HIV collaborative program, as there is proven benefit in treating the two conditions in close collaboration to prevent major morbidity. Further, other strands such, as Multi-drug resistant TB (MDR TB) is a fairly recent special form of TB where the conventional treatment has to be modified and prolonged duration of treatment is required. Globally, just over 30,000 cases of MDR-TB were notified to WHO in 2009. Other new strands such as XDR TB first found in South Africa and such mutations have emerged in other pockets.

So what is the solution?

The social angle of the disease should be addressed for the prevention and cure of these communities at large. TB is a relative easy disease to treat until one recognizes the socio-economic problems associated with being poor that hinders TB treatment. Majority of underprivileged people live in over clustered households in small dwellings, accentuating the potential for spread of this contagious disease within and across households. We conducted a health camp for one of the poorest village cluster in Bihar, India. In the process we received pilot ethnographic information from patients. It was worth noting that majority of TB sputum positive patients took crowded buses as mode of transport to travel an average of 40 kilometers to reach the TB testing center. Additionally, it is not uncommon to see patients lacking understanding of need for compliance, partially due to lack of basic education. Poor doctor-patient interaction is exacerbated by time constraints between the patient-doctor and the patients understanding to the rigidity of compliance. TB is an epidemic and stigma delays seeking care and thereby diagnosis and treatment.

Over the course of the last century, treatment methods have evolved significantly and so has the complexity of the disease. A truly global problem heightened with rising number of absolute poor people and migration. Simple additional measures are needed to supplement the strategies already in place. It is considered a disease of yesterday but many will continue to suffer tomorrow. Increasing education, local care while addressing social stigma and poverty will help limit and eventually extinguish the existence of a pre-historic disease in a modern time. I liked the article its very interesting and informative. Keep up the great work.