What color latrine would you like? Sanitation marketing in Bangladesh 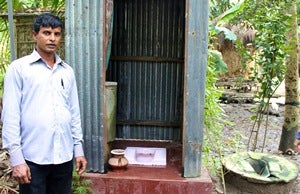 NGOs, lending agencies, and the public sector are hard at work in meeting the global sanitation target. But what about the private sector, and what about the families that do not want to wait for the next NGO to knock on their door with a better toilet? Over the past couple of years, the Water and Sanitation Program’s (WSP) Sanitation Marketing strategy in Bangladesh has tried to address these concerns by stimulating the supply and demand of hygienic sanitation facilities through the mobilization of local entrepreneurs. The objective of Sanitation Marketing is for families to have the desire and the agency to move up the sanitation ladder on their own.

In 2009, the pilot program began in five villages in the Jamalpur district, and has now been scaled-up to around 230 villages across Bangladesh with support from the Dutch WASH Alliance, International Development Enterprises, and the Max Foundation. WSP also strategizes and implements the project with Hope for the Poorest (HFP), a local Bangladeshi NGO, and the Association of Social Advancement (ASA), a microfinance institution.

Mohammed Jalal is one of the many sanitation entrepreneurs supported by Sanitation Marketing in the Hobiganj district where WSP has began scaling up the initiative since 2011. Through microfinance loans from ASA and small-business training sessions from WSP, Mr. Jalal was able to open two stores in Hobiganj. Mr. Jalal’s shops are decorated with colorful flags to attract customers and are filled with an assortment of sanitation products such as handwashing stations and off-set pit latrines. With a catalogue in hand, Mr. Jalal markets his products to local villages and gives households the chance to move up the sanitation ladder. Customers are able to choose the materials and colors of their latrine and are most importantly, able to choose the type of sanitation facility that fits into their budget. Products range from Tk 1,600 (US $20) to Tk 20,000 (US $250), and all Sanitation Marketing entrepreneurs offer an installment plan for families to pay for their products over time. WSP additionally connects these entrepreneurs to the local government in order to establish whether any families in the area are eligible for subsidies. In the Hobiganj district alone, Sanitation Marketing has been able to support over 17 entrepreneurs like Mr. Jalal to serve hundreds of happy customers.

Community-led total sanitation (CLTS) interventions were first introduced in Bangladesh to address low sanitation coverage. One of the goals of CLTS is to provide any sort of sanitation infrastructure, and consequently, CLTS interventions have shifted over 90 million people from open defecation to fixed-point defecation in the past couple of years. However, only about a third of latrines are considered hygienic in Bangladesh. With declining open defecation rates, Bangladesh is at the stage where households must begin to improve their sanitation technology. However, creating demand for such technology requires education and social marketing, and meeting this demand, requires a supply of low-cost sanitation technology that families can actually afford. As more developing countries begin to come to this sanitation crossroad, they should consider adapting such innovations like sanitation marketing that involves the private sector. Establishing permanent markets could be a vital step in ensuring that our sanitation efforts are sustainable and in giving families the role of being the customer where their needs are prioritized. 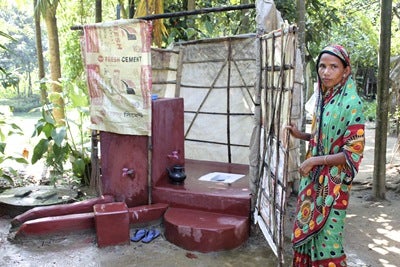 Learn More: What is Sanitation Marketing? We can learn a great deal about sanitation from this write up. Thank you World Bank.