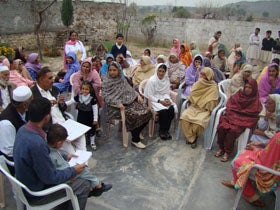 The social institution of caste and the many ways it can create exclusion amongst different groups has a generated much literature in South Asia, primarily focused on India. Caste is often incorrectly characterized as a social hierarchy inherent within Hinduism. In fact, caste is a social phenomenon that exists across groups in South Asia, including Hindus, Muslims, Sikhs and Christians throughout South Asia in varying degrees.

In Pakistan, research and debate on the implications of caste and poverty has been limited. While a substantial literature exists about the social structures of Pakistan, including various caste, kinship groups and tribes such as zaat (caste), biraderi/qaum (kinship groups) and qabila (tribe), development practitioners and policy makers have largely ignored the issue of caste and social exclusion in Pakistan with its links to inequality in rights, access services and representation.

With the exception of a few notable NGOs and independent researchers, development organizations have not examined how a range of policy initiatives related to social protection, education, health and labor market access could unevenly impact ‘low-caste’ communities in Pakistan. A part of the challenge of understanding the policy implications of caste in Pakistan is the lack of accurate data, particularly its regional distribution and spread within various religious groups. Caste is now widely understood to be fluid rather than a static and vertically hierarchical institution. While the term ‘Scheduled caste’ is used by the government to refer exclusively to so-called ‘low-caste’ Hindus. NGOs and researchers have frequently used the term ‘Dalit’ to refer to wider range of ‘low-caste’ groups across religious lines. According to existing research, the majority of ‘low-caste’ communities are believed to be concentrated in Southern Punjab and Sindh. But ‘low-caste’ communities exist across the country, with each province having its own hierracy and nuances of social exclusion that need to be understood by policy makers.

Why there is a need for greater research on caste and social exclusion across sectors?

Ethnographic and qualitative data have revealed some broad trends. In both Punjab and Sindh, the majority of ‘low-caste’ communities is located in rural areas and have a higher proportion of landless sharecroppers, while some groups are nomadic. Exclusion from land ownership has compelled many ‘low-caste’ communities to work as laborers, often in the brick industry known for its exploitative hiring practices including indentured labor. To an extent, urban migration has created greater social mobility for ‘low-caste’ groups. However, the prevalence of ‘low-caste’ informal settlements in Pakistani cities, and the high concentration of ‘low-caste’ groups in certain professions deemed inferior such as sweepers, janitors and manual laborers, suggests that urbanization alone is not be sufficient to end caste- stigma and poverty. ‘Low-caste’ women, in particular, often face multiple forms of exclusion including religious, caste and gender discrimination when it comes to accessing education, health and labor markets.

A recent World Bank paper entitled “Crossing Boundaries Gender, Caste and Schooling in Rural Pakistan” examines two forms of social barriers: caste affiliation and female seclusion in determining the impediments towards educational enrollment in rural Sindh and Punjab. The results find a substantial decrease in primary school enrollment rates for girls who have to cross their village to go to school often referred to as the “distance penalty”. More notably the study finds that ‘low-caste’ children, both boys and girls, are deterred from enrolling when the closest school is in a settlement dominated by high-caste students. The findings suggest that low-caste girls, benefit from improved school access only when the school is also located in a low- caste majority settlement.

The concept of caste is complex and far from static. It intersects with gender, religion, ethnicity and class to produce varied forms of social exclusion. Policy makers and researchers interested in issues of inequality and inclusive development must strive for more data to gain a deeper understanding of how these social inequalities are reproduced in access to labor markets, basic services and rights. In this regard, development practitioners, researchers and civil society groups in South Asia have much to gain through learning from each other’s experiences in striving to create more socially inclusive development policies that address the multi-dimensional causes of poverty and social exclusion. Great Analysis. Paints a very real picture of Pakistan and at the same time points to the wed of issues associated with caste.

It is always nice to see someone else working on same lines. We are also working on a research study "Addressing disparities in access to maternal health care in Pakistan: Gender, class and Social exclusion". We have also developed a policy brief and can share hard copies to anyone interested.

Dear Mr. Bhatti,
Could you kindly share the research study and policy brief you mentioned in the post, if it is completed? Thank you very much in advance.
Best regards,
Naoko Ohno (The World Bank)

I am a phd candidate working on Social Exclusion and its impacts on travel in Pakistan. Kindly share your ideas with me, i am always available to discuss it further. looking forward to your research. do inform me when u find something interesting.
Best

Dear Dr Afshan Bhatti,
I am glad to read about your project and would be nice if to get a copy of the policy brief about your working.
Please email me if you like to proceed.
Best,
Adeel

helo I m there ...want to discuss wid u on social exclusion
plz contact me
I need ur opinions plz ..waiting for ur answer

Dear Abida,
Nice to know about your working on exclusion in Pakistan.You can contact me on [email protected] will be glad to share our work experience on social exclusion in Pak.