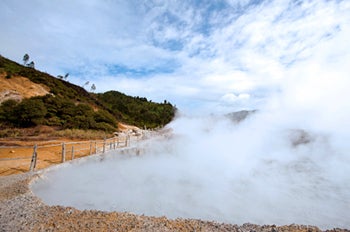 Indonesia is estimated to have the largest geothermal potential in the world – 27,000 megawatts, or roughly 40 percent of total global geothermal resources.  But currently, only 4 percent of that potential is being used to produce electricity.  Even at the current level of development, however, Indonesia is the third largest geothermal producer in the world in terms of installed capacity, following the United States and the Philippines.Many countries around the world are taking a close look once again at geothermal as an energy source that can deliver a “triple win” – clean, reliable, locally sourced – power generation. As previously blogged, a key barrier faced by geothermal developers is raising funds necessary to implement the early, riskier stages of a geothermal project.  In addition, countries such as Indonesia have abundant and cheap fossil fuel alternatives such as coal, which can cost less financially if the environmental and other benefits of a clean energy source such as geothermal are not taken into consideration.

The World Bank has been working closely with the Government of Indonesia to help address these barriers and scale up the development of geothermal.  The government is determined to take advantage of the country’s vast potential, and has embarked on a globally unprecedented expansion of geothermal capacity by 4,000 MW in the short-term.  Significant responsibility for meeting this goal rests with Pertamina Geothermal Energy (PGE), a subsidiary of the state-owned oil and gas company Pertamina.  PGE alone is mandated to develop 1,000 MW of geothermal capacity, which would be the largest expansion in the world by a single company.  To achieve these ambitious goals, though, it is essential to improve the country’s policy and regulatory framework and mobilize significant investments.

To meet this challenge, the World Bank is supporting the government through a grant from the Global Environment Facility (GEF) to undertake key reforms that will enhance the investment climate for geothermal development.  The World Bank is also helping PGE kick-start its ambitious geothermal expansion program through a $175 million IBRD loan, along with concessional financing of $125 million from the Clean Technology Fund (CTF).  In addition, the World Bank has secured over $10 million in grants from bilateral donors that is assisting PGE strengthen its technical capabilities in line with industry and international standards.

Work is now underway on two developments that are being financed with World Bank assistance, at Ulubelu in South Sumatra and Lahendong in North Sulawesi.  These two fields together will develop 150MW of new power generation capacity – enough to bring electricity to up to an additional one million households.

This multi-year effort has resulted in a number of lessons that will be essential to PGE in preparing the next generation of projects as well as being very useful to many developing countries as they begin to develop their own geothermal resources. To capture and disseminate these lessons, the Energy Sector Management Assistance Program (ESMAP) is supporting a study of the World Bank’s work with PGE that is now under preparation.

“Indonesia is taking a leadership role in geothermal development” said Migara Jayawardena, Senior Energy Specialist at the World Bank and the former team leader on the Indonesia geothermal support program. “The scale-up that is being undertaken by PGE is unprecedented anywhere in the world.  If it is successful, the company will almost double Indonesia’s geothermal capacity and contribute a 10 percent increase globally.  This will provide a rich source of experience, with important applications for other countries.”

One of the clearest lessons is that it is important to incorporate the environmental and other benefits of geothermal when making investment decisions, which often requires some forms of government engagement.  Developers will only invest if they can secure a return that is commensurate with the costs and risks associated with geothermal development.

In the case of Ulubelu and Lahendong, there was a financial viability gap because the cost of developing geothermal was more than the cost of electricity that the power company can purchase from coal-based sources.  To bridge the shortfall, the government facilitated a higher tariff from PLN, the national power company; and PGE agreed to accept a lower return on its investments than customary.  This contribution by Indonesia was rewarded through the compensation provided by the international community via the CTF loan – in recognition that geothermal provides a global public good due to its positive climate change impacts from the reduction of greenhouse gases.  This shared burden between Indonesia and the global community helped bridge the financial gap so the project could proceed.  Ultimately, it will be important for the Government of Indonesia to implement an effective pricing and compensation policy that will cover the additional costs of developing geothermal on a systematic basis.

“Getting the Indonesia developments off the ground required bringing together a number of aspects to make the project financially viable,” said Jayawardena.  “But financing by itself is often not sufficient.  It should be paired with sound technical assessments, the application of environmental and social safeguards, and ensuring sufficient capacity for successful implementation.”

In the end, the primary beneficiaries will be the electricity consumers of Indonesia. Currently, national supply is barely able to keep up with demand, and brownouts and load-shedding are common.  This project is expected to generate over 1.2 billion kWh of electricity annually, which could facilitate nearly one million new electricity connections. As well as facilitating the growth of new local business and jobs, the geothermal power that is generated will reduce the need for new coal-fired plants, reducing pollution and avoiding health impacts to local communities. The project is also expected to reduce CO2 emissions by 1.1 million tons each year. Wow, 27,000 Megawatts -With the world's largest geothermal potential, it would be a shame if the government would leave it untapped. Geothermal energy could surely change the lives of millions of people in Indonesia.

Here in the Philippines, big geothermal power plants (such as the bulusan geothermal plant) http://geothermalenergy.hostzi.com/ already provides electricity in some parts of Luzon and Visayas.

I can't totally agree with you here. Obviously I wish that the government will continue supporting the promotion of geothermal energy. And that they start to teach the other countries more about this source of energy. But with costs being still relative high, I'm not sure if the right time is now. I think we first need more innovative technologies which makes the geothermal potentials cheaper. But the right mindset is there, so the first brick of the wall is built in my opinion.