Energy Efficiency: Scaling Up to Cut Costs And Emissions 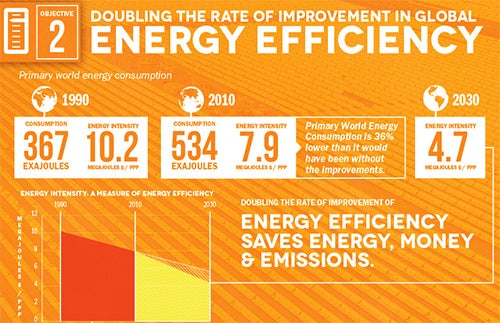 Energy is essential to heat homes and cook meals. It is needed to deliver proper health care in hospitals and to teach children. It is essential for economic growth and development and for powering industries, farms and businesses. It is at the heart of any effort to make a better life possible for people all over the world, in particular for the world’s poorest.

First, energy has to be produced, and it needs to increasingly be produced  in sustainable ways as the world steps up to the challenges of climate change. At the same time, improvements in how efficiently our buildings, factories, vehicles and appliances use energy offer huge potential to get more benefit out of less energy. Energy efficiency can make energy more affordable for the poor, and it can reduce emissions.

This has included support for a national program in Mexico, in which the government set up 1,110 points of exchange at which millions of people turned in incandescent light bulbs in return for 22.9 million more efficient CFLs, achieving a total saving of about 1,400 gigawatt hours, as much energy as is consumed in the entire Mexican state of Nayarit or Colima. It earned Mexico an entry in the Guinness Book of World Records for the number of light bulbs distributed.

The Bank’s engagement in energy efficiency also includes more than $3 billion in financing in the past decade to Eastern Europe and Central Asia, helping countries like Belarus, which reduced its energy intensity by 60% over the past 15 years, and Uzbekistan, which saved 50,000 megawatt hours of energy that would otherwise have been lost to inefficiencies. Total savings to the region from energy efficiency projects, programs, and initiatives over the last 10 years are estimated at 42.5 TWh per year, equivalent to the total amount of power generated in New Zealand in 2010. Investments in the region are already saving an estimated 7.5 million tons of CO2 every year.

The Bank Group has also been working closely with China to support its energy efficiency efforts in major cities such as Shanghai, providing advice and financing to retrofit inefficient buildings. This project and others have contributed to China’s energy efficiency achievements, whose scale was revealed in the recent Sustainable Energy for All Global Tracking Framework Report. It found that China’s energy efficiency drive has resulted in the world's largest absolute energy savings for a single country. 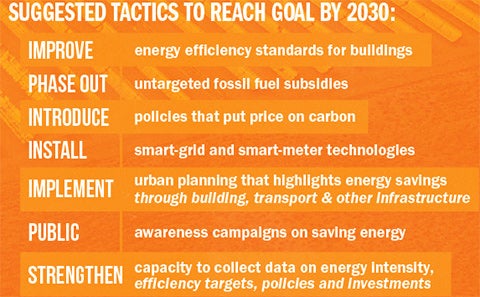 Almost half of all energy generated across the world is used to cool, light, and ventilate buildings. Much of the Bank Group’s energy efficiency support has therefore provided financing and policy advice on public procurement of energy efficient services and products in cities and buildings. Improving planning in cities – particularly the fast-growing megacities of the developing world – is critical to the transition to a more sustainable energy future. The Bank’s Energy Sector Management Assistance Program (ESMAP) has developed the TRACE tool to help municipal governments identify and prioritize opportunities to reduce urban energy use.  In Rio de Janeiro, TRACE is being used to help make next year’s FIFA World Cup and the 2016 Summer Olympics the most energy efficient ever.

The Bank Group’s International Finance Corporation is also working directly with investors and through financial intermediaries to provide financing in this area, including through the Excellence in Design for Greater Efficiencies (Edge) Green Buildings Certification System, which is helping owners design and retrofit buildings to be more sustainable. 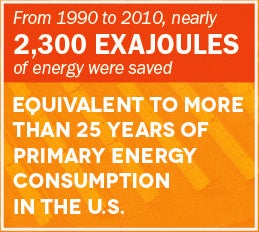 Energy efficiency improvements are a crucial part of any effort to reduce carbon emissions and keep global warming below the critical level of 2 degrees Celsius. Such improvements can also deliver huge savings in energy costs to households, as well as production, mining, manufacturing, and commercial operations in public and private sectors alike. Those are two reasons why doubling the rate of improvement in energy efficiency by 2030 is one of the three goals of the Sustainable Energy for All initiative, co-chaired by World Bank Group President Jim Yong Kim and UN Secretary General Ban Ki-moon. No doubt about it: energy efficiency is scaling up to cut costs and emissions. May the efforts multiply!

Related
Infographic: Sustainable Energy for All - What Will it Take? I agree that nowadays to improve planning in cities – particularly fast-growing megacities of the developing world – it is critical to transition to a more sustainable energy future. The Bank’s Energy Sector Management Assistance Program (ESMAP) has developed the TRACE tool to help municipal governments identify and prioritize opportunities to reduce urban energy use.

Energy efficient buildings, appliances, transport are making huge contribution in EE. There is another angle of EE. In most of countries demand curve of electricity has a peak which lasts for less than 100 hours in a year. Using smartgrid technology, it is possible to reduce this peak demand. This will avoid addition of new generating capacity which also contributes to EE.

Rajendra, you raise an important point, with which I fully agree. Energy efficiency or demand side management (DSM) covers both the reduction of energy (MWh) and peak loads (MW). The latter is perhaps more relevant in many of our client developing countries with fast-rising demands, which face huge deficits in their generation supply capacity, resulting in chronic blackouts and brownouts. In our Sustainable Energy for All Global Tracking Framework, the energy efficiency indicator used is energy intensity (toe/GDP). Turning to the more specific issue of Bank Group projects to enhance energy efficiency, we use indicators that often include both MW and MWh reduction.

Vijay,
Thank you for an excellent summary on energy efficiency. This area is of major concern for the MNA Region which is perhaps the only region in the world that has shown an increase in energy intensity over the past decade. Several of the countries such as Saudi Arabia, Bahrain and Morocco have embarked on programs focusing on energy efficiency. EE is a major area of support that the Bank is being asked to provide the MNA region -- a program which we are doing with the support from the anchor. One question for you: when is the price of energy a binding constraint in creating the appropriate incentive for increasing energy efficiency? There seems to be an assumption that regulatory intervention on the supply or demand side can have a significant impact on energy efficiency independent of the price of fuel or electricity. Does the global experience offer any lessons on this particular issue? Or is it that regulatory interventions create the political economy space for price alignments that strengthen the energy efficiency agenda? Or put more broadly,of the suggested tactics you have outlined, which ones have the highest impact and which ones need to be implemented in combination to have an impact?
What are the lessons from implementation?
Junaid

Thank you Junaid for the comment and questions. Yes, the Middle East and North Africa region stands out as energy intensity increased there by about 0.8% per year since 1990, according to data in the Sustainable Energy for All Global Tracking Framework report. This is cause for concern, as the rest of the world is moving in the opposite direction, reducing energy intensity by about 1.3% annually.
It is true that subsidized fossil-fuel-based energy prices discourage consumers from investing in energy efficiency. The good news is that governments can offer a blend of EE incentives, regulatory mechanisms and policy tools that can drive EE in the positive direction. Public funds currently used for energy subsidies that stymie EE investment and cause greater waste of energy could be used instead to provide smart EE incentives. Governments can set up robust implementation systems to implement energy efficiency regulations. They can adopt policies that focus on saving energy. Such approaches are examples of prudent fiscal management that also help consumers in a sustainable way.
Many countries have used such approaches to show that increased EE can be a precursor that smooths the transition to removal of energy price subsidies. If you look around the OECD countries, there are plenty of high-impact success stories in which EE regulations and policies (appliance standards, building EE codes, etc.) have been applied. These include Japan, Korea, the US, and Germany, to name a few. In the developing world, however, it has been more challenging to get effective implementation and compliance. In the short term, our experience suggests that the quickest returns can be had by concentrating on the "low hanging" opportunities through EE incentives.
The Bank Group's—including IFC's—investment programs in China and Eastern Europe have helped clients deliver results with this approach, and the same is true of similar work currently under way in Bahrain and Saudi Arabia. These EE incentives are thus a sound first step in getting some early progress on energy efficiency, while systems and infrastructure for EE policy implementation are strengthened and made more robust.

I agree that nowadays to improve planning in cities – particularly fast-growing megacities of the developing world – it is critical to transition to a more sustainable energy future. The Bank’s Energy Sector Management Assistance Program (ESMAP) has developed the TRACE tool to help municipal governments identify and prioritize opportunities to reduce urban energy [email protected] http://onaprsc.com.vn

In the emerging economies, energy efficiency and cutting T&D losses are two most profitable investments in the energy sector - more than new energy sources.

I agree with Mr Goel. Reducing T&D losses is low hanging fruit but major part of these losses are non technical losses and to reduce them very strong organisational will is necessary. Technology may provide the solution if there is will.

Growing global energy demands put pressure on both the supply and the prices of oil, gas, and coal. As fossil energy sources are an important part of maintaining a stable energy network in the U.S., it is crucial to use these resources in a sustainable manner.
http://www.usa.siemens.com/energy-efficiency/energy-efficiency.html

Mr Iyer,
The article succinctly highlights the massive strides the WBG has made in energy efficiency. As the Bank invests further, it is worth considering the life cycle assessment (cradle to grave analysis of carbon footprint) of products manufactured in the energy sector. For example, when 'millions of people turned in incandescent light bulbs in return' for CFLs, how do you deal with such sub optimal/inefficient products that are already in the ecosystem (thereby influencing the carbon footprint)?
The propagation of energy efficiency should also be in tune with the manufacture of energy efficient/look carbon products. I would like to know how the WBG influences such policies in areas where such norms are not legally enforceable.
But above all, thank you for making a difference to the energy and environment dynamic of our planet. Cheers!
Abhinav

The propagation of energy efficiency should also be in tune with the manufacture of energy efficient/look carbon products. I would like to know how the WBG influences such policies in areas where such norms are not legally enforceable.