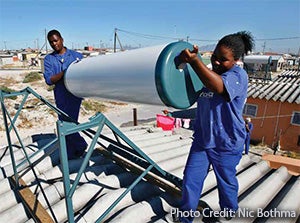 Brazil, China, India, Indonesia, Mexico, Poland and South Africa are among the world’s largest emerging economies. And in the past five years, all have made substantive shifts towards lower-carbon growth strategies – shifts that are still underway. In 2007, these countries represented 33 percent of global CO2 emissions. By 2010, three of them – Brazil, China and India – accounted for over 40 percent of global investment in renewable energy.

What are the optimal planning approaches behind sustainable, pro-growth paths? What are the methodologies, inputs and assumptions on which these approaches are based?

A new report by the Energy Sector Management Assistance Program (ESMAP), addresses these questions.  Planning for a Low Carbon Future: Lessons Learned from Seven Country Studies, distils the results of studies undertaken in these seven countries with support from ESMAP and the World Bank, and offers practical recommendations for government officials, practitioners, and international funding and development agencies.  The report focuses on the different modeling approaches taken by the studies depending on the country context, and compares their strengths and weaknesses.

"Low carbon planning should be seen as a continuous process. As consensus is built around the initial studies and the data collection and modeling that go into them, this work and this thinking becomes part of the broader economic planning cycle within governments." | Rohit Khanna, Program Manager, ESMAP

In five of the countries – Brazil, India, Indonesia, Mexico and Poland – the studies took the form of an economy-wide analysis of low carbon growth potential, employing a range of data and modeling tools.  The governments of China and South Africa conducted their own analyses, but requested the assistance of ESMAP and the World Bank for peer review and international expertise on specific focus areas.

There is no one-size-fits-all model for low carbon development, and the results and outcomes of the studies differ markedly by country.

The Mexico study used a cost effectiveness analysis to assess 40 near-term priority mitigation measures.  Taken together, these could result in Mexico’s GHG emissions in 2030 remaining roughly what they were in 2009, but with significant GDP and per capita income growth.  The largest savings identified were in agriculture and forestry.

The study in India looked at five sectors that together represented 75 percent of greenhouse gas emissions from energy use in 2007, including transport, building and power generation.  All scenarios showed emissions increasing, but against a backdrop of a relatively low carbon footprint. Recommendations included energy efficiency measures for industry, transport and household consumption, along with technical loss reduction measures in power transmission and distribution and enhancements to national grids.

The work supported in China resulted in three policy notes: on China’s renewable energy target, on improving power dispatch, and on the energy-intensive cement industry.  The recommendations included increased development of hydropower, improving the performance of wind power, and phasing out obsolete cement production capacity.

Some commonalities emerged across the seven countries, offering lessons for low carbon planning:

•    In all the countries studied, there is potential for large-scale reductions in GHG emissions against business-as-usual trajectories while maintaining economic growth targets. However, achieving these reductions will require action across sectors, including energy supply and demand, land use, forestry, urban development and planning, and sustainable transport.

•    Many interventions will pay for themselves.  These include measures such as increasing cogeneration, improving vehicle efficiency, and reducing electricity system losses.

•    However, more ambitious global action is still required.  Taking many of the actions outlined in the reports, and translating them into a substantial contribution to global climate change mitigation will require stronger efforts at the international level to bring down technology costs, support the development of new technologies, scale up private sector financing, and provide climate finance to developing countries.

The good news is that countries are already taking action. These studies have contributed to an ongoing process within each country to identify opportunities for green growth, while limiting risks associated with being locked into high carbon development.   The low carbon growth studies have also helped inform over $2.5 billion in World Bank and Clean Technology Fund lending designed to implement interventions recommended by the studies.

An important finding of the studies is that the process of low-carbon planning can be as important as the recommendations themselves.  A successful approach requires country leadership, flexibility, multi-disciplinary teams, and most importantly, building consensus across ministries and sectors.

“Low carbon planning should be seen as a continuous process,” said Rohit Khanna, Program Manager for ESMAP.  “As consensus is built around the initial studies and the data collection and modeling that go into them, this work and this thinking becomes part of the broader economic planning cycle within governments.”

While the Planning for a Low Carbon Future report can be seen as the capstone to the initial series of low carbon country studies, this work is far from over.  Lessons are already emerging from ongoing work supported by ESMAP and the World Bank in the next group of countries, which include Morocco, Nigeria and Vietnam.

To read more and download the Planning for a Low Carbon Future report, go to http://www.esmap.org/node/2091

For the full range of reports in the ESMAP Low Carbon Growth Country Studies Program, go to http://www.esmap.org/node/1335