Rarely does one read about a private utility’s successful program to provide electricity to the urban poor. Rarer still is when the program is a profit-making venture and can serve as a learning experience for other countries around the world.

But an Indian private utility, Tata Power Delhi Distribution Limited, in New Delhi, has been successful in providing electricity to 217 slums—with 175,000 customers—by engaging with the community. It has reduced non-technical losses and improved its revenues from $0.3 million to $17.5 million over the last five years.

As part of an initiative by the World Bank’s Energy Sector Management Assistance Program (ESMAP) on expanding electricity access to the urban poor, there have been many knowledge exchanges between Brazil, Colombia, Kenya and Jamaica to learn from each other’s experiences and implement best practices. Recently, ESMAP’s team along with delegations from Jamaica and Kenya, visited Tata’s project in India to understand the reason behind their success.

On paper, the case seemed too good to be true, so we were curious to see what a field trip to one of these communities, Wazirpur JJ colony, would reveal. Most of the houses in Wazirpur’s slums are single rooms that are 10 ft by 12 ft in size and serve as living, kitchen and sleeping quarters. Roads to access these homes are often very narrow and flanked by open drains. But the electrification rate in Wazirpur under Tata’s project—at a little more than 90 percent—left us pleasantly surprised. 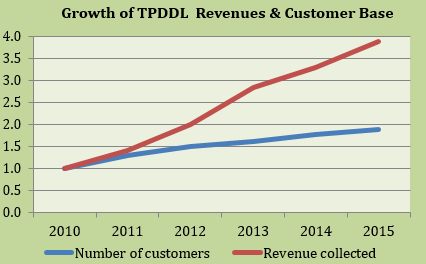 Talking to Tata’s customers in Wazirpur and hearing stories from them about how electricity access has changed things and spurred hope for a better, more dignified life. Their stories showed us that Tata’s business model could definitely succeed.

Tata had formed a Special Consumer Group in 2009 as part of its efforts to understand and implement a customized approach for urban slums. The company has also been very successful in linking their corporate social responsibility activities to the electrification drive and providing valuable services to their legal customers.

While many energy access programs and projects are considered to be mostly technical and financial in nature, Tata’s model has demonstrated that energy access is primarily a social issue. The company has also shown that it makes business sense to engage communities in a meaningful way and treat them as an equal partner in providing electricity access.

Another important lesson is that the World Bank’s energy access approach and programs in energy access need to be linked to other developmental priorities of the communities to create ownership and to make the access program more sustainable. Focusing just on energy access is not enough to reach poverty alleviation goals. Productive uses of electricity (tailoring, convenience stores, food processing, etc.) that benefit the community and support livelihoods should go hand in hand with energy access initiatives.

Tata is taking a number of steps to that end, including creating an enabling environment and goodwill among slum community members, conducting surveys to understand their priorities, advocating for the government to waive old electricity bills that are overdue and working to make legitimate electricity connections affordable.

The company is also involving communities by encouraging beneficiaries to be brand ambassadors, building entrepreneurial skills and most importantly, making electricity part of overall development, including safe drinking water and sanitation, for these communities.

Since the inception of the Special Consumer Group and Tata’s community engagement efforts in 217 slums, Tata’s customer base has nearly doubled over the last five years. At the same time, their revenues increased fourfold, vindicating their approach.

We came back inspired and with the belief that universal energy access can be achieved through meaningful partnerships between businesses, governments and communities. In order to share lessons from one country with other urban energy access projects, we, at ESMAP, will facilitate, support and follow up on some of the components that Kenyan and Jamaican utilities and regulators want to adopt from Tata’s experience.
Topics
Energy
Agriculture and Food
Urban Development
Water
Countries
Brazil
Colombia
India
Jamaica
Kenya
Regions
Africa
Latin America & Caribbean
South Asia a good read of a success story. we have the same model in Kenyan People settlement areas. we call it GPOBA. although still in progress we can sing the same song as Tata! thanks to World bank for such a thoughtful grant!