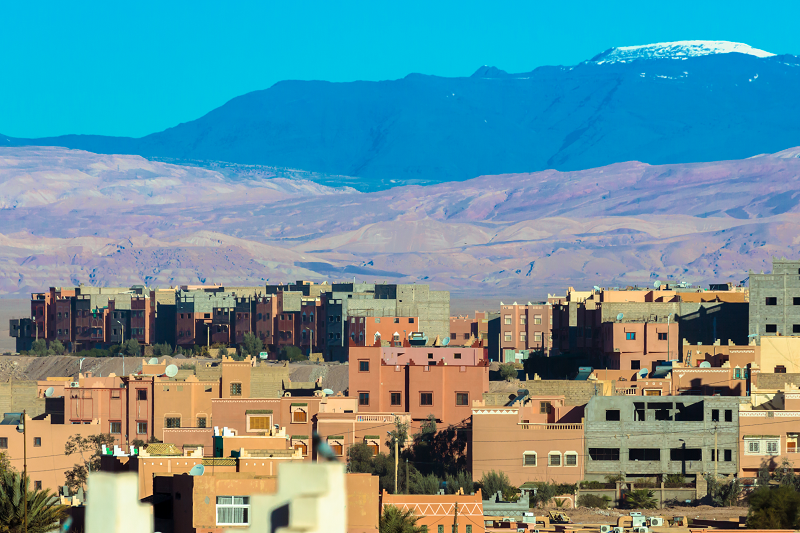 While responsible for only a small share of global emissions, the country is taking big steps to curb them.

In the next few weeks, Morocco is preparing to commission the first phase of what will be the largest concentrated solar power plant of its kind in the world. The 510 MW Noor-Ouarzazate Concentrated Solar Power (CSP) complex was first conceived as part of the Moroccan Solar Plan (MSP) adopted in 2009 to significantly shift the country’s energy policy and climate change agenda, which is particularly relevant with the climate conference (COP21) happening in Paris.

This is no small feat—currently, Morocco depends on fossil fuel imports for over 97 percent of its domestic power needs, making it particularly susceptible to regional conditions and volatility in oil prices.

The country is determined to change that, with plans to boost the amount of electricity it generates from renewable sources to 42 percent of its total capacity by 2020. This entails developing and commissioning at least 2,000 MW of solar and 2,000 MW of wind capacity in a relatively short timeframe.

The Moroccan Agency for Solar Energy (MASEN) was established to implement MSP’s solar targets in conjunction with the Office National de l’Electricité et de l’Eau Potable (ONEE), Morocco’s national electricity and water utility.  Noor-Ouarzazate is the first of a series that MASEN expects to commission by 2020 to achieve its renewable energy target.

In a document that lays out post-2020 climate actions the country intends to take for a low-carbon, climate-resilient future, Morocco has committed to reducing its greenhouse gas emissions by 32 percent by 2030, compared to “business as usual” projected emissions. This requires an overall investment of US$45 billion.

Much of this mitigation commitment rests on a major transformation of Morocco’s energy sector and rests on four pillars: Morocco is willing to commit its own resources behind this transformation, and has already committed significant long-term investments behind MASEN’s 2020 targets.  Nonetheless, it still needs external financial support of at least US$35 billion to complete this transformation and achieve its carbon emission reduction targets.

The World Bank has partnered with the Moroccan government and other donor agencies (European Investment Bank, African Development Bank, KfW, Agence Française de Développement, and the European Union) in implementing the MSP by providing $236 million from the Clean Technology Fund, administered by the Bank, and $400 million from the Bank’s own resources to support construction of the 510 MW Noor-Ouarzazate complex in central Morocco. The first phase of the complex is expected to be commissioned in January 2016, and the second phase (350 MW) is currently under construction.

The Bank, through the Global Environment Facility, also supported Morocco’s pilot CSP hybrid plant at Ain Beni Mater, which generates electricity from both solar energy and natural gas, and is currently working with ONEE on three new photovoltaic plants.

More work and investments are needed to support MASEN’s continuing program and ONEE’s efforts to improve its energy efficiency. Part of these investments will need to come from the private sector, and other parts from international financial institutions. The World Bank is considering support for MASEN’s new CSP project near the city of Midlet in northern Morocco, and for ONEE’s efforts to increase its electrical system’s supply-side efficiency.