Africa is rich—energy rich. The continent has massive potential for renewable and low-carbon energy, with unparalleled resources to generate solar, wind, hydro and geothermal power.

With such an endowment, African nations have much to gain from building internationally pioneering low-carbon energy systems. At the same time, the world stands to gain from Africa avoiding the high-carbon pathway that has been followed by today’s richest countries and major economies in other regions.
"The effects of climate change are being felt all over the planet, but not equally." -- Kofi Annan
The poor pay more

Despite this energy wealth, two-thirds of Africans (621 million people) still live in households that do not have electricity. Africa’s poorest people also pay the world’s highest prices for energy. A woman living in a village in northern Nigeria, for example, pays 60 to 80 times as much for a unit of energy as a resident of New York because she does not have access to grid electricity.

Removing the barriers that stop her accessing affordable, efficient and renewable energy would unlock market opportunities and unleash productive power that helps create jobs, generate wealth and build inclusive societies. We must push hard for this now.

Achieving Sustainable Development Goal 7—ensuring access to affordable, reliable, sustainable and modern energy for all by 2030—is critical to our ability to meet a wide range of other needs.

Africa’s power deficit is a priority shared by all the members of the Africa Progress Panel.

The 2015 Africa Progress Report, Power, People, Planet: Seizing Africa’s Energy and Climate Opportunities, urges African governments to raise their ambition to increase energy supply as well as their people’s access to electricity. They should aim for a 10-fold increase in power generation by 2040, while laying the foundations for a transition to low-carbon energy sources.

Boosting the use of Africa’s huge renewable energy resources must be at the heart of this.  In our report, we call for investment into renewable energy to meet the goal of universal access to energy by 2030. The Africa Progress Panel is certain that success is possible if a high level of ambition and strong political will are immediately brought to bear.

We urge Africa’s leaders to start an energy revolution that connects the unconnected, and meets the demands of consumers, businesses and investors for affordable and reliable electricity.

Furthermore, Africa’s leaders must act with urgency to put in place the policies needed to cut corruption in the energy sector and build climate-resilient societies.

Africa’s premier development financing institution, the African Development Bank (AfDB), is refreshingly sanguine about the continent’s energy prospects, noting that around half of the needed finance to power Africa is already available. The Bank’s new leadership has made solving Africa’s energy challenges and unlocking the continent’s huge energy potential the Bank’s number one priority. The AfDB is showing serious intent to help propel African countries at a faster pace towards a major transformation in their energy systems.

Yet what is possible in Africa will also be determined in part by the actions—or the inaction—of the international community. In the absence of stronger international cooperation on energy, many countries will be unable to escape the gravitational pull of the business-as-usual pathway.

The year 2015 has provided us all with a fresh opportunity to focus minds, political will and action on what needs to be done to protect our common future, and the future of our children, grandchildren and all life on our planet.

The G20 clearly has an influential role to play. It includes the countries that have historically emitted the most greenhouse gases, which are also the most powerful economies on the planet. The G20 has the financial resources to exploit the bountiful investment opportunities provided by the growing international low-carbon energy sector.

The pledge by the G7 leaders at the end of their summit this year, to make deep cuts in emissions and to phase out fossil fuels by the end of the century, is noteworthy and commendable. Their new commitment to increase investments in the African renewables sector is also a powerful acknowledgement of the important role Africa can play in the global low-carbon transition, if significant investments are made now in the creation of clean energy systems.

G7 leaders should now encourage their peers within the G20 to collectively agree on a commitment to a similar level of ambition on both fronts. And the G20 should then put in place mechanisms to act fast on its commitments.

In 2013, G20 countries provided $88 billion in fossil fuel subsidies for exploration and production alone. Governments in the major emitting countries should place a stringent price on emissions of greenhouse gases by taxing them, instead of continuing to effectively subsidize them. Eliminating subsidies for fossil fuel exploration and production—especially coal—should be a priority.

The Africa Progress Panel is therefore urging G20 countries to set a timetable for phasing out fossil fuel subsidies, with a ban on exploration and production subsidies by 2018. A 2015 G20 communiqué along these lines would send strong signals to step up the necessary momentum towards the faster decarbonization of the global economy.

It would also show leadership and high expectations for the outcome of the global climate summit in Paris in December.

Just as ambitious leadership resulted in the economic growth of many of the economies that comprise the G20 today, ambition is essential to the achievement of the mission before us.

Africa has started to show its readiness to act in the common global interest and move faster towards the creation of low-carbon energy systems. It now looks to similar ambition from its international partners.

It is our hope that the G20 will rise to this challenge and collectively commit to speed up the process of decarbonizing the global economy.

For more on this issue, see the video by Kofi Annan, chair of the Africa Progress Panel, on Power People Planet.

Note: Caroline Kende-Robb is the Executive Director of the Africa Progress Panel, a foundation chaired by Kofi Annan. She is currently on External Assignment from the World Bank. This commentary is published in G7/G20 Research Group’s Agenda Intelligence on “Delivering Sustainable Energy Access.” 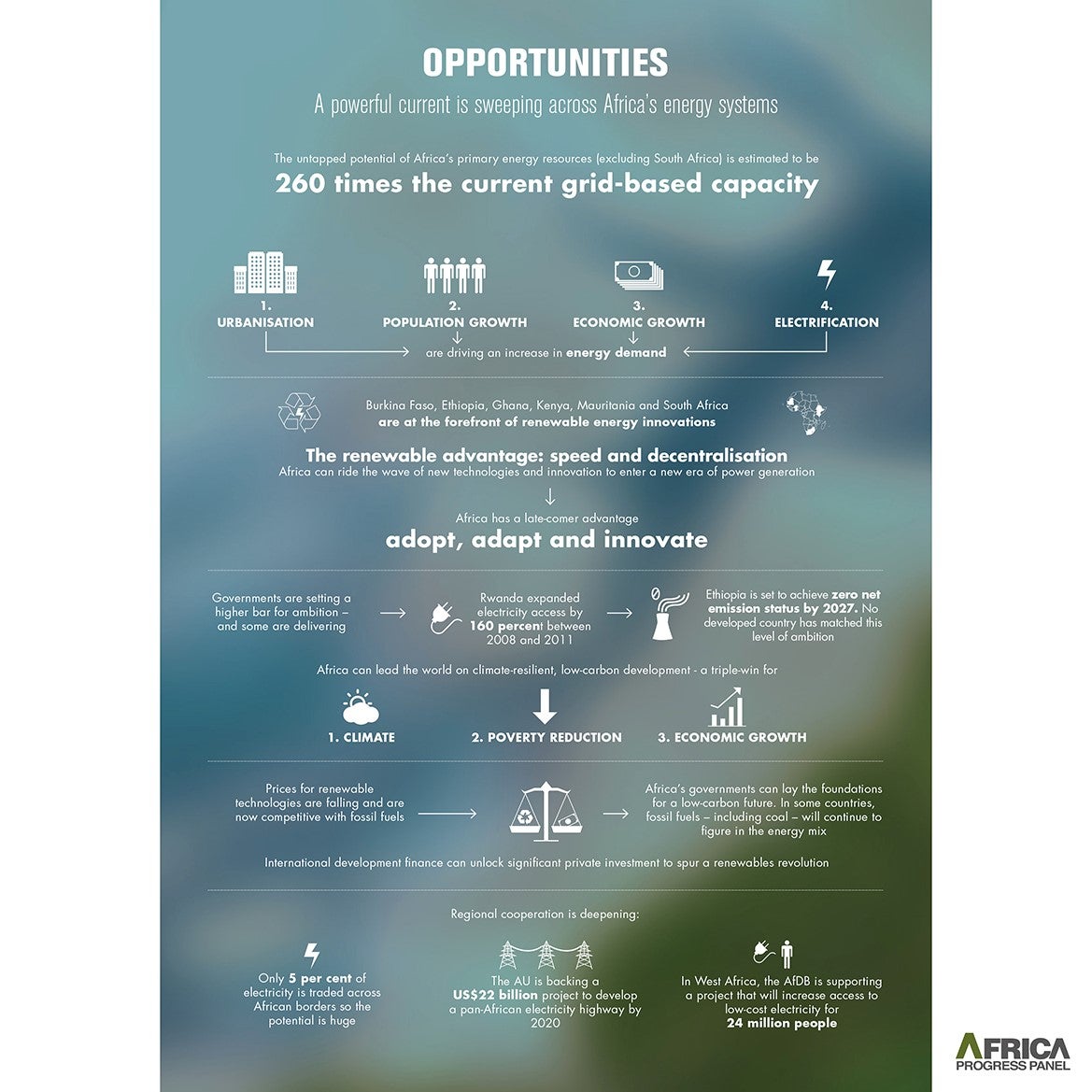