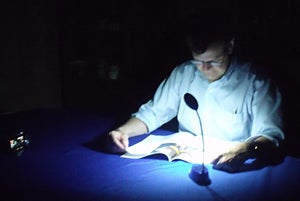 When I heard that Jim Yong Kim, the World Bank’s new president, was to meet staff in the energy department where I work on his first day at work July 2, it occurred to me that a good way to introduce him to our work in sustainable energy would be a quick demo of solar lanterns.

I suggested it to my colleague Katherine Steel, the manager of Lighting Africa, a joint Bank-IFC program that has created markets for off-grid solar lights in Africa.

More than half a million quality-tested solar lights and lanterns of various kinds have been sold across Africa as a result of the program. The goal is to reach 250 million people by 2030.

Katherine, or Kate, did the demo—of a Greenlight Planet solar lantern—for Jim Yong Kim, whose questions and comments prompted a good discussion of energy poverty and how the Bank is helping to address the problem.

After the new Bank president had moved on to meet and greet staff in other departments, my colleague Christopher Sheldon, a mining specialist, approached Kate. He was looking weary from a sleepless night comforting three of his six kids who were sick amid the power outage that struck the Washington DC area after a violent storm June 29. “Say, could I borrow a couple of those lights?” he asked. “My youngest kids are used to a night-light, and one of these would help them get to sleep.”

“Sure,” Kate replied, upon which several other electricity-starved residents of the Maryland and Virginia suburbs asked for the same, including Vijay Iyer, director of the Bank’s energy department, and yours truly.

A day later, Vijay said having light at his blacked-out home in McLean, Virginia, “has a dramatic impact, just as it does in Africa.”

At our home, my wife Mayra and I had been turning in for the night just after sunset ever since Friday’s wild storm knocked out power in Bethesda. But thanks to a Barefoot Power Firefly lamp powered by book-sized solar panel, we were now able to read in the evening and charge our cell phones.

This is an improvement over the first nights of the power blackout. The light is much brighter than that of a candle, and a candle won’t charge a Blackberry. But it is only an interim solution.

Don’t let a crisis go to waste, said Rahm Emanuel, then chief of staff to US President Obama in 2008. Well, the power outage caused by last Friday’s storm has not been wasted on me. It has given me a more direct, though thankfully brief, experience of energy poverty. And it has underlined for me that even if off-grid solar power is a lot better than nothing, it is still just an appetizer to the full-course meal of on-grid electricity access, for which 1.3 billion of the world’s people are waiting.

A solar light allows children, and adults, to study at night. It offers an easy charge for a phone, which is a critical communications tool. And, it produces no carbon emissions or particulates. But it did nothing to stop the food in our fridge from spoiling. We remain without coffee or hot meals, or landline phones, or television. And the temperature in the house is still in the high nineties.

So, after four days of energy poverty, my conclusion is this: a Barefoot Power Firefly solar lamp is just fine, but it will never replace on-grid power.