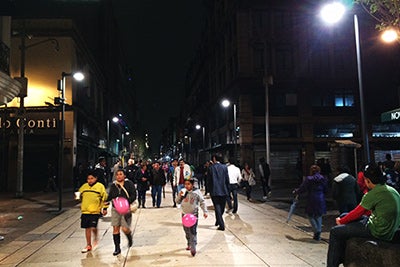 In the late afternoon of June 17, as the streets of Mexico City transformed into probably the largest celebration of a tie game at the World Cup, I joined 200 other people filling the main hall of the Technology Museum of the Federal Electricity Commission.  We would have to wait a little while for our event to start.  Nothing that afternoon, not even the opening of the Conference on Energy Efficiency in Cities, would get in the way of the game between Mexico (ranked 20th in the world by FIFA) and Brazil (the favorite to win the tournament).  And despite the fact that the game ended in a 0-0 tie, the mood of our Mexican hosts was upbeat and confident.

This mood was appropriate; it nicely reflected the ambitious approach of Mexico to the main challenge presented at the conference: how national and local governments can work together to make cities much more energy efficient.  Mexico had also just secured the chairmanship of the high-level policy committee of the International Partnership for Energy Efficiency Cooperation (IPEEC) where they also intend to pursue this agenda.

The conference was hosted by SENER, Mexico’s Energy Ministry, and supported by the World Bank – including its Energy Sector Management Assistance Program (ESMAP) -- the International Energy Agency (IEA), IPEEC, and CAF.

At the conference, SENER’s Under Secretary, Leonardo Beltran, announced a new national program to scale up energy efficiency in Mexico’s cities. This program will kick off with energy diagnostics in 30 cities, each from a different Mexican state to ensure broad coverage.  The World Bank will be a privileged partner as Mexico pushes the urban energy efficiency agenda forward both domestically and on the international stage.

Energy efficiency is the cheapest, cleanest, and most readily available energy source and it offers the opportunity to help Mexican cities provide services at lower cost, alleviate budgetary pressures, enhance their competitiveness, and help lower GHG emissions at least cost.  For example, public lighting represents between 10-40 percent of all energy bills in municipalities and is a large source of their emissions (typically 30 to 60 percent).  Moving to more efficient public lighting, using LEDs for example, can lead to energy savings in the order of 50 percent or more  – and the payback period is relatively short.  Similarly, substantial energy savings are possible in the water and waste water sector.

There are barriers associated with lack of information or awareness about the potential of energy efficiency.  There are obstacles associated with securing financing to cover the initial investment cost.  There are capacity constraints and unclear incentives, along with institutional and legal challenges.  Moreover, only a small fraction of cities are deemed credit-worthy, restricting access to capital.   The rates of return of energy efficiency projects make them look good on paper, but confidence is often needed that expected energy and monetary savings will be realized in practice.

That said, the Mexican government is betting it can use its capacity, with the support of the World Bank, to work with municipalities and help them save money, improve services and reduce emissions using energy efficiency.

The technical, institutional and financial arrangements are never simple.  But Mexico clearly has the right combination of capacity, incentives, support and ambition. Mexico may no longer be part of the 2014 World Cup, but its sustainable development efforts have just started. Go Team Mexico!