Why Do More Than 50,000 Families in Bangladesh Buy a Solar Home System Every Month? 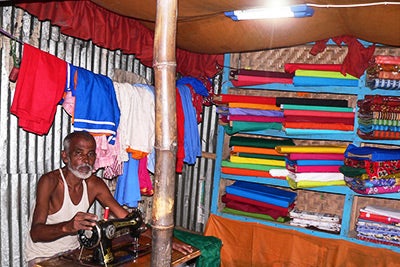 “Does the solar home system work? Do you really get better lights? Or, is it just a big fuss?’ I have been asking solar home systems households in rural Bangladesh these basic questions for the past five years as part of my implementation review missions for the Rural Electrification and Renewable Energy Development program, which has installed over  2.8 million solar home systems since 2002. This has so far contributed to a 9% increase in access to electricity in Bangladesh.

During one of those field trips, in response to my question, a rather elderly gentleman shot back, “I bought this system and am paying for it every month till it is paid off. Do you think I am stupid to pay for something that does not work?” His answer sums up why the solar home system is becoming more popular. People buy the system because it works. Today, over 50,000 households are buying the systems every month.

On field visits to rural Bangladesh, I constantly hear stories about how solar home systems transform lives. A solar home system enables Farida Begum in a village marketplace to run a tea stall from her house while her children study in the evening in a room behind the stall.

Mussamat Farida tells how she is no longer afraid to step out of her home in the dark - thanks to lighting from a solar home system. "Ever since we got the solar home system, life here has become safer. There are fewer thefts and robberies. The thieves used to steal the cows. Now, that has become much harder because there is light everywhere"

Fakhruddin of Gazipur district told me how his grandchild got burn injuries when their mosquito net caught fire from kerosene lanterns at home. That incident prompted Fakhruddin to get in touch with a local NGO to install a solar system to light his home. He no longer has to worry about the safety of his grandchildren. With improved lighting, he can also run the tailor shop in front of the house well after dark, and make more profits by working longer hours before festivals.

Why are solar home systems so popular in Bangladesh?

Based on user responses from implementation missions over the past five years, these findings are increasingly becoming apparent:

What are the key factors that led to the large-scale adoption of solar home systems?

Two elements of program design, I believe, were instrumental in the Bangladesh success, and these are possible to replicate in other countries. The first is the competence of the implementing agency - the Infrastructure Development Company Limited (IDCOL), a government-owned financial intermediary. IDCOL receives funds from the Bank Group and other development partners and channels funds to the NGOs who are in turn providing micro-credit to households for buying the solar home systems.

The second is the close attention paid by IDCOL and the NGOs to ensure quality of the solar home system components. An independent technical standards committee approves system components from various vendors. IDCOL inspectors are in the field year-round checking systems for compliance with approved technical standards. This, along with enforcement of a penalty for not meeting standards, is crucial to ensure that the NGOs comply with them.

All these measures ensure that the program works. An impact evaluation study in 2013 confirmed longer study hours for children, improved health due to improved indoor air quality as well as increased health awareness from watching TVs from SHS, and more participation of women in decision making in certain household affairs.

Every day, solar home systems touch the lives of people in myriad ways, inspiring my day-to-day work.  The goal of reaching 6 million homes or providing 20% of access by solar home systems is now an attainable reality. I feel lucky to be doing something that brings light and a better quality of life to millions of people in far-flung areas of Bangladesh.
Topics
Energy
Countries
Bangladesh
Bangladesh
Regions
South Asia
The World Region Really great work. I think the prices for LED lights are quite high and may not sound affordable to many. But, though the initial cost is too high, these lights are manufactured to save on a lot of energy and thus money in the long run.

Indeed an inspiring accomplishment and day to day step a heading toward the 500 MW Solar Program by the Govt. But it would be much better if suitable lab facilities can be arranged within Bangladesh to certify the solar modules and also strong law enforcing agency to check the quality of the products.

Kudos for undertaking such an important project. What an accomplishment in bringing light to those needed the most in an inexpensive, sustainable way!

Great news and a rewarding and challenging job. I have a way to generate solar fuel using solar panels to replace oil or gas for cooking. Could this mitigate the Bangladesh villager's cooking problem. Can you please let me know the area of a typical solar panel system that can generate 40 Wp mobile system?

Thank you indeed for supporting such a great cause that means a lot to the BOP. I, on behalf of IDCOL and its stakeholders, truly appreciate your instrumental role in bringing many other Development Partners with their supports for scaling up of the program.
Keep up all your good works. Thanks once again.
Monirul Islam, IDCOL

Really brilliant idea solving real world problems! IF the big energy companies in the UK such as invested in this sort of thing they would become much more popular and theyd be doing something genuinely useful with all their surplus cash!