Scholars have long explored whether people’s opinions really change as they get older. This question is particularly relevant today for the aging economies of Europe, where the elderly are expected to reach 30 percent of the total population by 2050. And by 2030, the majority of voters will be 50 years or older in most countries of the region. 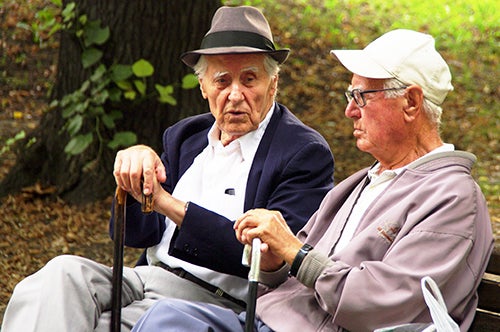 So, should we expect to see the region’s policies shift along with its aging citizens?

A cursory analysis hints that we should. When individuals were asked to rank their priorities in terms of government spending, we found that older individuals were much more likely than their younger peers to report pensions and healthcare as their first priorities. Protecting the environment, education and assisting the poor didn’t enter the top tier.

Even when accounting for other differences in wealth, education, occupational status and number of children, there was a consistency in the variance of opinion between elderly and young people. Of course, this finding is not surprising if we consider that most individuals have self-serving preferences; older individuals are likely to benefit directly from more spending in pensions and healthcare, while less likely to reap the benefits of investment in education or climate change.

Certain age patterns also emerged when we analyzed data that explored a wider range of policies. For example, older people are more likely to consider crime-fighting a policy priority – more so than housing, unemployment, inflation or taxation. A naïve extrapolation of these age patterns to the future would imply that, as the elderly population grows, the region’s policy agenda may change dramatically. This implication appears especially true given that elderly citizens are more likely to vote than young people.

But the numbers don’t tell the whole story.

The above projection assumes that policy preferences change as we age. However, the real issue might be a cohort or generational change. Some of the cohorts included in the analysis were uniquely marked by important historical events in Europe - including economic crises, the Second World War, the reconstruction years after the war, the emergence of the Welfare State and the rise and fall of socialism in Eastern Europe. Preferences for the role of the government may be substantially different for this population than for subsequent generations, especially if the latter live through more stable and prosperous periods.

In fact, when we compare the evolution of policy preferences throughout the life cycle for individuals born in the same year, we find that the association between age and policy priorities isn’t quite as neat. In particular, while we still observe that individuals are increasingly more likely to say that pensions and fighting crime are important priorities as they get older (and less likely to mention education as a priority), the age patterns found above for the other policies vanish.

Our results suggest that aging societies may be more likely to support cuts to education spending and increases to pensions and fighting crime. However, our findings also show the importance of cohort or generational effects (i.e. that growing up during a certain economic or political context does matter for policy preferences). This result is consistent with previous research that shows that individuals growing up during recessions tend to have vastly different beliefs about public institutions and redistributive policies than those growing up during times of economic prosperity.

Importantly, our findings highlight the urgency to implement economic reforms that address the sustainability of pension systems in the region, since public support for overhauls may fall even further as the electorate rapidly ages.

However, our results also suggest that we should be cautious when projecting age patterns, since they are far from deterministic. In other words, some young liberals may become old conservatives, but it also depends on the economic circumstances and events through which they live.

Growing up in a Recession

Public Opinion Toward Costs and Benefits of Social Security and Medicare