Improving fairness, opportunity and empowerment: A view from the South Caucasus

I was quite intrigued by the findings of the latest Europe and Central Asia Economic Update, with its special focus on "Polarization and Populism". As Program Leader for the South Caucasus region, covering Azerbaijan, Armenia and Georgia, I was particularly interested in the fact that these three countries report the highest levels of life and job dissatisfaction, despite declining disparities and overall income improvement in the region (in Georgia, for instance). Indeed, using the World Bank’s "twin goal” metrics, the South Caucasus region has been performing reasonably well. 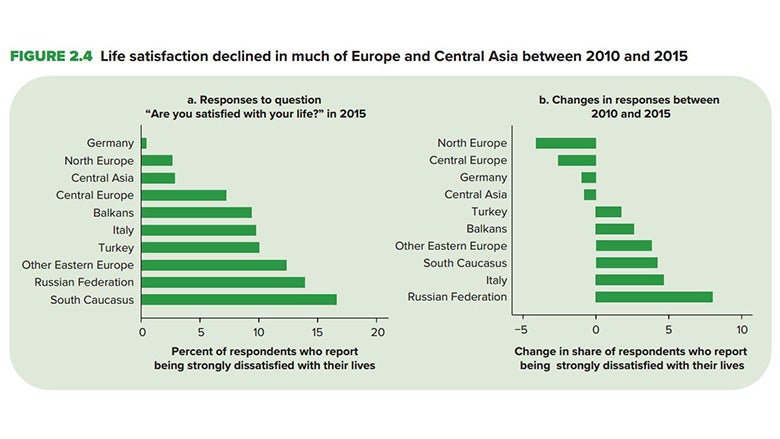 Our Chief Economist for Europe and Central Asia, Hans Timmer, concludes the Economic Update with a reference to "anxiety" (an interesting word to join our economic jargon). Perception of inequality of opportunities (close to perception of “unfair”) drags down our countries’ moral, and the sentiment that, after all, there is little than one can do to improve his/her own life. Even worse, few people believe that life will improve significntly for their children. Routine manufacturing jobs are decreasing, and economic mobility remains low.

Adding to this that, by 2050, Georgia's population is expected to reduce by half a million, while Armenia's is expected to reduce by around 300,000, leading us to a somewhat gloomy picture. We don’t have comparable poverty and inequality data yet for Azerbaijan, but we know the country is facing extremely tough times, and that the modest expected oil price recovery next year will not be the solution to break the pattern of dissatisfaction.

The stabilization/restructuration/diversification agenda in the country is daunting, for a growing - yet aging population. So this suggests that the twin goals are not sufficient. Maybe it is not all about being “richer”, after all, even though this is key in the equation. In my view, it is also about perceptions, expectations, fairness, empowerment, voice and the ability to take actions.

Hence the question: can I take actions today that I trust will improve my quality of life, and that of my children, in the future? As the Europe and Central Asia Economic Update points out, the jobs agenda and redistribution targeted at improving equal and increasing opportunities should be placed front and center in our work at the country level.

However, in a world where competition and technological progress force us to be ever more innovative, and where more educated people enter the job market every day, the challenge also goes above and beyond national policies, calling for international coordination to stop free-riding and negative externalities. For example, free-riders of globalization include those mastering tax “optimization”, but really avoiding paying taxes where due.

Why is supra-national coordination so crucial? The answer is simple: because we are all in the same boat, and global competition without global regulations might well mean a race to the bottom.

The Global Forum on Tax Transparency and Exchange of Information, hosted two weeks ago in Georgia with 140 delegate countries, IMF, OECD, EU, WBG, and UN, is a response in the right direction. Georgia has joined the Base Erosion and Profit Shifting, “BEPS” Inclusive Framework, which seeks to deter aggressive large taxpayers operating in several countries arbitrate across tax systems to minimize payments. So, the country is now committed to implementing the minimum standards by 2020.

Another example is the most recent Marrakech Climate Change Meetings. These initiatives reveal the true price tag of free-riding and not coordinating at the global level (you might think you win as an individual, corporate, country, government, but this is short-sighted: at the collective, global level, we might all loose by acting individually (think of global warming, but also the global erosion of taxes which further weakens global and national public policies in a vicious circle).

If we - people, corporations, civil society, governments - commit to global coordination initiatives of the same spirit, I am hopeful that it could become a race to the top. So we can all believe that the future will be brighter for ourselves and our children.
Topics
Macroeconomics and Fiscal Management
Jobs & Development
Social Protection
Countries
Armenia
Azerbaijan
Georgia
Regions
Europe and Central Asia