Since October 29th, 2015, Central Asia has experienced fifteen earthquakes of moment magnitude 5.0 or greater, which on average amounts to an earthquake every 6 days. Among these events are two notable ones that occurred on December 7th and 25th of 2015.

The first earthquake was a 7.2 magnitude event in Murghob district of Tajikistan. This was the largest earthquake in the country since the 1949 Khait earthquake and it brought widespread damage throughout the Gorno-Badakhshan Autonomous Region, Tajikistan's largest province located in the Pamir mountains.

Losses consisted of 2 fatalities caused by landslides,  multiple injuries, complete or partial destruction of over 650 houses and 15 schools and kindergartens, damages to several health centers and a small hydroelectric power station, and loss of livestock. Estimates suggest that 4,000 people have been displaced and over 124,000 affected by the earthquake, leaving many people homeless over the harsh winter period.

The second earthquake took place on December 25th, 2015 in the Afghanistan-Tajikistan border region. Although the earthquake was of much smaller magnitude (6.3), it still caused multiple casualties and damage in Afghanistan and Pakistan.

On October 27th-28th, 2015, the World Bank held a Central Asia Earthquake Risk Reduction Forum, which gathered government representatives from Republic of Kazakhstan, Kyrgyz Republic, Republic of Tajikistan, Turkmenistan, and Republic of Uzbekistan to discuss the pressing issues of earthquake risk.

The day before the Forum, a devastating 7.5 moment magnitude earthquake occurred in Northern Afghanistan, taking nearly 400 lives, mostly in Afghanistan and Pakistan. Although this earthquake was felt throughout Central Asia, it was not "the big one" of the region. Nevertheless, it did the job of reminding us that Central Asia is exposed to a constant risk of large earthquakes.

Seeing that earthquakes pose a large danger in the region, the Central Asia Earthquake Risk Reduction Forum sought to bring together Central Asian countries and international partners to continue the dialogue on what can be done to reduce and mitigate earthquake risk in the region.

The Forum was supported by the Japan-World Bank Program for Mainstreaming Disaster Risk Management in Developing Countries. Over 60 participants attended, with delegates from the five Central Asian countries presenting on the current status of earthquake risk information and risk reduction initiatives in their countries. International experts from Bangladesh, Germany, Japan, Turkey, and the UK also presented on state-of-the-art work in seismic risk assessment and large scale earthquake risk reduction programs around the world.

Five main topics were explored during the Forum: (1) Central Asia's preparedness to earthquakes; (2) creation of risk information and risk assessments with a purpose; (3) earthquake risk reduction investments and programs around the world and in Central Asia; (4) challenges and solutions in creating urban resilience; and (5) reduction of countries' fiscal vulnerability to earthquakes and other natural disasters.

The Forum left it's participants with a few key takeaways. In recent years, Central Asian countries have improved their capacity for preparedness and response to disasters; however, the risk of a large earthquake event in the region is high, and therefore continued improvements in the capacity of the countries are imperative. Each of the Central Asia countries has established an institution dedicated to the study of seismology and there have been a large number of studies conducted on seismic hazard in the region.

However, to fully understand their earthquake risk, the countries should conduct assessments that also consider exposure and vulnerability of its assets, infrastructure and population. In addition, before conducting any seismic risk assessment, stakeholders must understand what is its purpose, since risk assessments are most valuable when they are used for informing decisions. Risk information is also key to prioritization of risk reduction activities in light of constrained financing, and it helps to convince high level decision-makers about investments.

Central Asian countries have started some programs to reduce earthquake risks in schools, hospitals and public buildings. However, there has not been a systematic approach to investing in comprehensive programs covering all sectors at risk. In terms of fiscal impacts of earthquakes and other natural disasters, the majority of the Central Asian countries have been responding to large disasters through reserve funds, budget reallocations and international financial support. This provides an opportunity to develop a better understanding of the contingency liabilities and explore ex-ante financial mechanisms to create a more efficient risk financing strategy.

Finally, we believe that Central Asian countries have started to shake and not only stir old ways of thinking about disaster management, where they already began to take more proactive approaches to systematically reduce earthquake risk.

More information about the Forum and its conclusions can be found here. 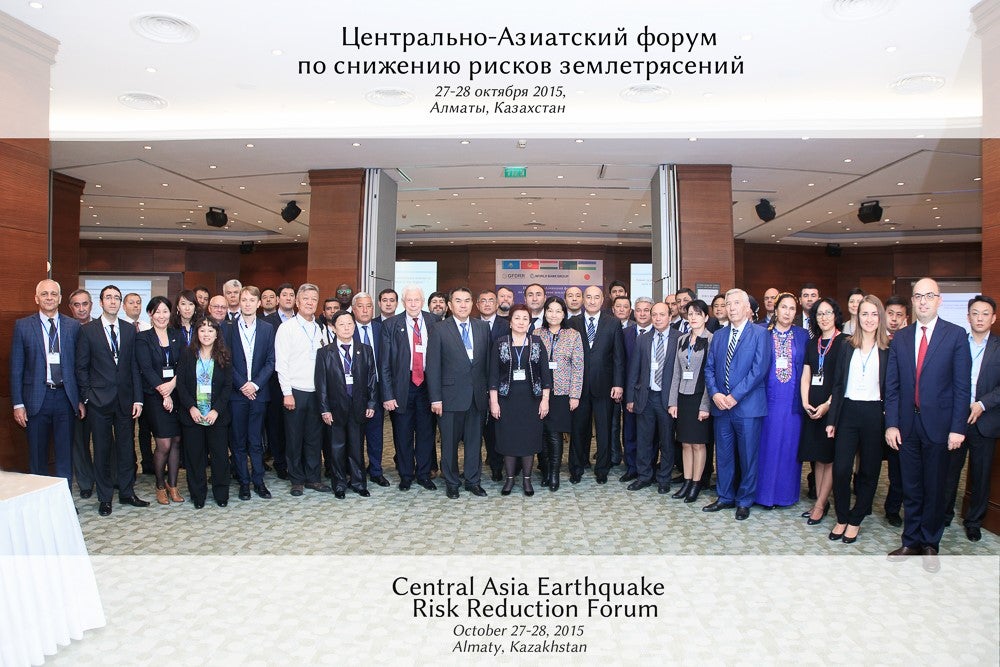 Blog: Why do we need to talk more about risk reduction in Central Asia