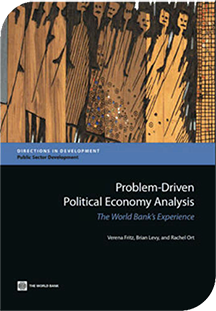 Sometimes, development approaches work.  Policies are adopted, implemented, and – perhaps not perfectly, but overall – have the expected effects.  Sometimes, they don’t work.  Policies are debated and delayed for years.  They are undermined during implementation, are quickly back-tracked in the face of stronger-than-expected opposition, or are implemented, but end up triggering negative and unexpected consequences.  There are also constraints related to fiscal resources and capacity.  However, political economy dynamics often play a decisive role with regards to whether these constraints are addressed, or conversely, remain in place.

Many countries have seen growth and poverty reduction in recent years. The turn of global dynamics in favor of poorer countries has been remarkable.  At the same time, the list of development challenges remains long.  Environmental degradation, improving congestion and pollution in cities, developing and maintaining infrastructure networks, from power, to roads, to water, and ensuring that growth is shared rather than associated with sharply widening socio-economic disparities all remain high on the agenda. In an increasing number of countries, political stability itself remains at risk.

Since the mid-2000s, a growing number of teams across the Bank have undertaken political economy analyses (PEA).  This is consistent with the Bank’s overall effort to find solutions that provide not only a good technical fit, but are likely to be more feasible given various stakeholder interests and incentives.  PEA takes into account limited institutional capacities, risks of elite capture, and the frequent failure of expected collective action.

What typically prompts teams to undertake political economy analysis?  Often, it is a sense that understanding the technical side alone is insufficient for the challenge at hand.  Moreover, government counterparts themselves get frustrated by the political economy dynamics they face – such as resistance to reforms from influential stakeholders who stand to lose or constant political influencing of spending decisions which makes it difficult for ministries to pursue agreed upon strategies and priorities. They may therefore appreciate a Bank team’s effort to consider not only the technical side of the solution, but also the strategy for ‘making reforms happen’. The challenge that Bank teams then face is how to develop the analysis in a way that leads to a good quality and operationally useful output.

The new edited volume on Problem-driven Political Economy Analysis: the World Bank’s Experience  (Fritz, Levy, & Ort 2014)* takes stock of what has been learned over the past five to ten years.  It includes eight cases – from different regions and sectors – ranging from the development of commercial agriculture in Ghana, power sector reforms in the Dominican Republic, decentralization of health services and roads in the Philippines, to fiscal stabilization efforts during a mining-sector boom in Mongolia.  First set out in a Problem-driven governance and political economy analysis: Good practice framework  (Fritz, Kaizer, & Levy 2009), a ‘problem-driven’ approach means starting from a specific issue rather than focusing on a broad analysis.   Such a focus gives the analysis a clear scope and helps arriving at conclusions and recommendations that are actionable for Bank teams and/or the government counterparts.

Among the lessons learned, the following stand out: Great report, and great summary. It's really helpful to see how WBG thinks about PEA and what it's been useful for. I think it only gets us halfway there though. The focus on structural forces is necessary, but insufficient. You need a certain amount of actor-focused analysis and more frequent iterations to adapt your thinking over the course of a project. I posted on our blog with a bit more: http://thereboot.org/blog/2014/01/24/toward-political-intelligence-in-a…