Climate change and malnutrition must be tackled together 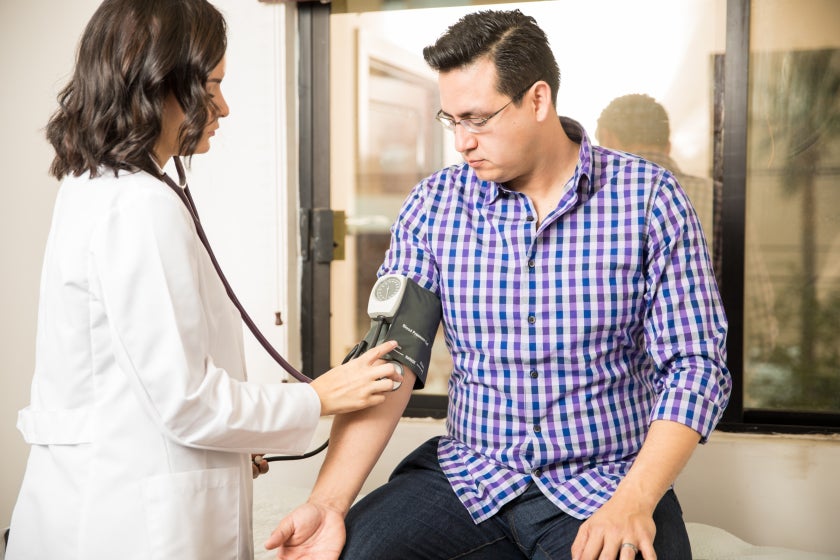 As climate change challenge continues to worsen, its impacts extend far beyond the extensive damage to the environment—it also has a direct effect on global health, including obesity and undernutrition.

Obesity, undernutrition and climate change have generally been viewed as separate concerns. But a new report released this week --  The Global Syndemic of Obesity, Undernutrition, and Climate Change: The Lancet Commission Report -- shows that these three interconnected agendas –termed a “syndemic” must be tackled together, with synergistic actions, to really create transformative and lasting change.

Malnutrition in all its forms, including undernutrition and obesity, accounts for 19 percent of ill-health and premature death globally – by far the largest cause. Excess body weight affects 2 billion people worldwide and 2 billion people are undernourished including micronutrient deficiencies. Climate change will make both of these conditions significantly worse.

The report -- the result of a three-year project led by 26 experts from 14 countries -- terms the interplay of obesity, undernutrition and climate change The Global Syndemic stating that this is the greatest threat to human and planetary health, affecting most people in every country and region. These three pandemics are linked through common systemic drivers and shared solutions. Food and agriculture policies, transportation, urban design and land use systems, for instance, drive The Global Syndemic, which in turn are driven by policies and economic incentives that promote overconsumption and inequalities. For example, food systems not only drive the obesity and undernutrition pandemics but also generate 25 to 30 percent of greenhouse gas emissions, and cattle production alone accounts for over half of those emissions. Car-dominated transportation systems support sedentary lifestyles and also generate between 14 to 25 percent of emissions.

Though the costs of the syndemic are extensive, disproportionally affecting poor people and low-income countries, related policy responses have been slow and inadequate. Undernutrition is declining too slowly to meet global targets, no country has reversed its obesity epidemic, and comprehensive responses to the threat of climate change have barely begun.  However, the good news is many of the actions to reduce obesity and undernutrition would also be beneficial for climate change mitigation and adaptation, and vice versa.

We must prioritize actions that can influence multiple parts of the syndemic simultaneously. Double-duty or triple-duty actions, as the report calls them, include, for example, guidelines for a sustainable diet, regulation of the food industry especially for ultra-processed foods and high-sugar foods, and policies for healthy, equitable, environmentally sustainable, economically prosperous food systems. Specific examples (see illustrations) include reducing the consumption of red meat and promoting active transportation options. 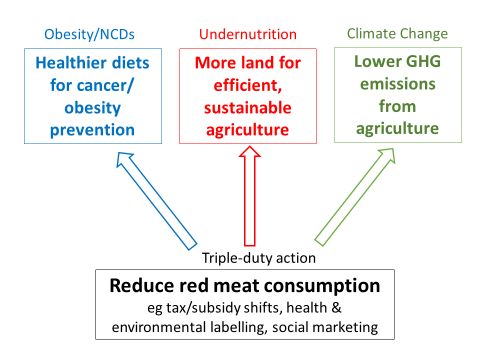 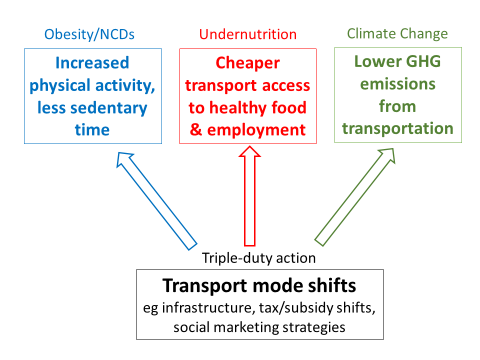 Turning these recommendations into reality will require a new social movement for change and a radical rethinking of the relationship between policymakers, business, governance and civil society. Strong and concerted efforts at all levels by nations and municipalities, civil society, funders and international agencies working both individually and collectively.

Among its far-reaching recommendations, the report calls for the establishment of a new global treaty on food systems - like the global conventions for tobacco control and climate change – to restrict the influence of the food industry in policy making and to mobilize national action for healthy, equitable and sustainable food systems. Other recommendations include redirecting the US$ 5 trillion in current government subsidies to fossil fuel and large agricultural businesses globally towards sustainable, healthy, environmentally friendly activities –a recommendation that the Bank has made in the past as well in the context of reducing undernutrition (Investment framework for Nutrition, 2017).

The World Bank, as a multisectoral institution is uniquely placed to address the recommendations of the report through its investments in health, nutrition, agriculture, transport, education and urban planning and design. The forthcoming World Bank report on obesity will lay out a some of these potential actions.

“Through our recently-launched human capital project, we have a real opportunity to scale-up our investments not only in reducing undernutrition, but also on preventing obesity to improve adult survival rates in countries at all income levels,” said Tim Evans, Senior Director, Health Nutrition and Population at the World Bank Group. “Together with our corporate commitment on climate change, there is a real opportunity to drive progress on the double and triple-duty actions that will help address this syndemic”.

Read the full report and its recommendations, The Global Syndemic of Obesity, Undernutrition, and Climate Change: The Lancet Commission report. In my country men consume alot of meat in the market, with no proportional care for the children and women in the home. Eliminating or reducing malnutrition calls for reducing inequity at the family level too

Thanks Ruth....we agree with you completely. Addressing Inequities within families is one of the ways to reduce malnutrition. Young children and women are often the lowest priority in intra-household food allocation in many societies— and yet they are the ones who are critical to building human capital. Changing these societal norms is key to helping grow healthy societies and healthy economies. And lowering meat consumption among adults can significantly reduce obesity and related non-communicable diseases, while also reducing greenhouse gases — a win-win-win for all!!

I am the Executive Director of an organization called NTAG in Nepal. We work in the field of health and nutrition. We want learn more about the relation between climate change and nutrition.