The cost of antimicrobial resistance is too high to ignore 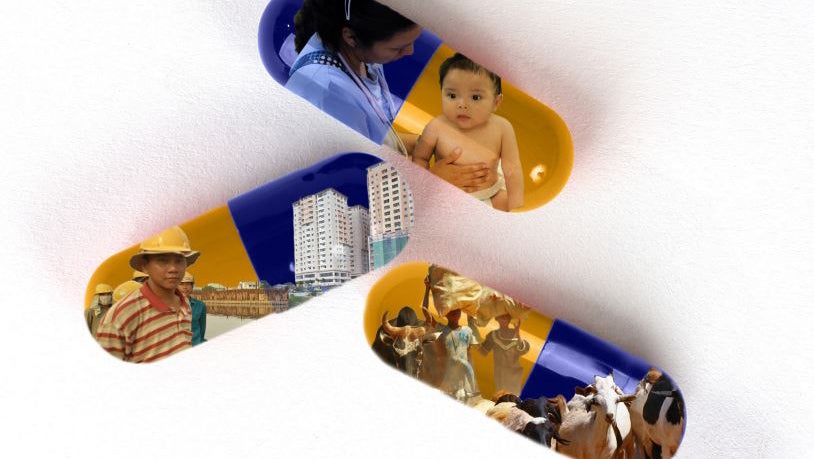 It really caught my attention when a friend of mine, an otherwise healthy chest physician in his late 40s, told me recently that he almost died of pneumonia. He had to be hospitalized twice, given an IV cocktail of antibiotics each time, only to recover about a month later, totally drained and weak.  He told me that it was caused by Klebsiella pneumoniae -- a bacterial infection increasingly resistant to antibiotics and known to strike the immunocompromised, frail and alcoholics -- which he thought he must have gotten from a patient. He considered himself lucky to have survived.

One of the potential side effects of working in development for the World Bank, or for any global health institutions or agencies for that matter, with limited direct contact with what is happening on the ground is the difficulty in putting a face to the statistics which bombard us incessantly, until, that is, it hits us in the face.

It is a common practice that the reports we publish refer to data and statistics, and provide us with evidence for advocacy to mobilize the global health community for action. As such our new discussion report “Drug-resistant Infections; A Threat to Our Economic Future” is no exception. It does do what it was meant to do: provide data, evidence, together with future scenarios to draw attention to Antimicrobial Resistance (AMR), a major global health and economic threat. The Report posits that by 2050 the global GDP may decline up to 4%; and the livestock sector, a major source of economic activity, could shrink up to 11% in Low Income Countries, seriously undermining their growth potential and pushing 28.3 million people into extreme poverty globally, 93% of it in the developing world. As for healthcare expenditures, the report forecasts an additional $1.2 trillion of spending per year by 2050. To put it all into context, the Report predicts that the economic costs would be much higher than the devastating 2008/2009 economic crisis, much more so for the developing world, and much harder to bounce back from.

We all know scenarios and estimates have many underlying assumptions and that this is not an exact science. Yet the rigorous analytical studies behind all that gives me a pause for concern that we, as the global community, are facing a threat to our and our children’s security and welfare. We need to act fast to reverse the scary trend toward a world with no effective antimicrobials to treat infections, let alone contain and eliminate pandemics.

But I am also worried beyond what the statistics tell me, and that is because of my friend’s preempted dance with untimely death as a healthy physician. We have all seen the pictures and videos coming from Ebola-stricken countries of West Africa with half-naked patients lying on the ground in their homes or in health facilities, surrounded by doctors, nurses and others dressed in space-like suits, minimizing contact with the sick, and the suspected infectious, to protect themselves and their colleagues to do their job effectively.

And I contrasted all that with a photo in the report where a caring nurse is holding and comforting an infant. And I could not help but think of an era of severe antimicrobial resistance in not-so-distant future where we find ourselves in a healthcare practice environment without any personal touch or caring intimacy with patients for fear of contagion, no matter how low a probability this may have. Imagine operating theaters, wards, clinics where all contact with patients is done through staff in space suits, or by robots, with providers conducting on monitors and with joysticks their diagnostic and therapeutic activities behind the safety of well-insulated rooms. There may be cure, but will certainly be no more care, at least the way I understand it.

Is this a far-fetched scenario? I do not think so. All what it takes would be another outbreak, or pandemic, caused by a drug-resistant microorganism.

It is not just the numbers then, lower GDP growth, increased healthcare expenditures that worry me only, but also the very essence of what healthcare may transform itself to, high tech services without the care.

I really would not want that to happen, and I am confident that we could avert it if we, as the global community, act now.  All we need is a political commitment at the highest level for an additional annual investment of $9 billion into human and animal health. Given the expected benefits of $20 trillion we could reap by 2050, a return greater than 100 times, it is imperative that we do invest and invest now. And only then that we all, healthcare providers and patients alike, could safeguard the very essence of healthcare with humanism and compassion.

Publication: Drug-Resistant Infections: A Threat to Our Economic Future Antimicrobial Resistance remain a major public health problem in Africa. In Mali (West african county) according to 3 years surveillance result in capital city (Bamako), more than 30% of enterobacteria (among them Klebsiella, Escherichia, etc.) isolated in routine activites were resistance to at least 3 antibacterials. Currently, we isolated some bacteria with multidrug resistance from communities and hospitalized patients. In addition, HIV drug resistance became a challenge because if all patients living with HIV must be threated, we need to rienforce virological monitoring to prevent and to manage efficienty HIV drug resistance occur.
We have some patients without possibility to be treat because of multidrug resistance issues.
Through global health security agenda, we are training all hospital lab agent to identify and perform susceptibility testing.
In general, low income countries need to be very reinforced to conduct a sustainability combat again antimicrobial resistance, if not, the burden will increased regarding human and animal health.