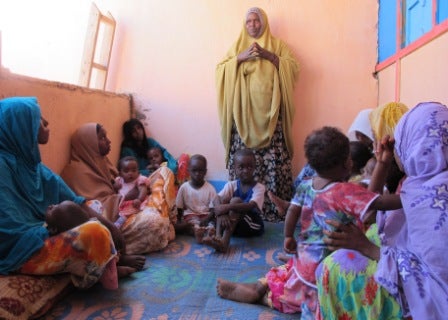 We were sitting on floor mats in the hot and dusty Quartier Moustiquaire, the poorest neighborhood of Djibouti City, observing a group of new mothers and their children discussing child feeding practices. All of a sudden, there was an uproar in the group. One woman had her head bent down in shame, and several other women shouted and pointed fingers at her.

My Djiboutian counterparts told me the embarrassed woman was being criticized because her 5-year-old son still doesn’t speak.  Rather than follow the ancestral tradition of giving water to her newborn, she chose to exclusively breastfeed her last child until he was 6 months old. The group asserted that this choice had led to the child’s developmental problems.

My immediate reaction to the scene was, “Peer pressure is a true obstacle to promoting optimal breastfeeding in Djibouti!”

Healthier child rearing and feeding practices are vitally needed in this country. Only 1% of mothers exclusively breastfeed their child until the age of 6 months (2006 country statistics), per World Health Organization (WHO) recommendations—one of the lowest rates in the world. In addition, scarce food and drinking water translate to rates of chronic malnutrition higher than 40% in several regions, and vitamin and mineral deficiencies are rampant.

With thirst a common concern among the poorest in Djibouti, new mothers often give water to their infants in addition to breastfeeding, but giving unsafe water to children in this setting can be deadly.

The government of Djibouti is trying to correct such behaviors with an innovative, integrated safety net program for families in the poorest and underserved urban and rural areas of the country. The project is funded by the Japanese Social Development Fund (JSDF) and is supported by the World Bank.

Evidence shows that an increase in income doesn’t necessarily translate into improved nutrition outcomes; therefore, the project focuses on improving the human capital of poor families by combining a workfare program with community-driven interventions to prevent chronic malnutrition in those same families.

To tackle misinformation negatively influencing the behavior of new mothers, the project promotes “Shining Mothers” as role models to change behavior in communities[1]. These are women living in the same community, of the same education and income level, who, despite harsh living conditions, are raising healthy and well-nourished children.

What are these women doing differently that their children flourish against all odds?

The “Shining Mother” becomes an agent of change as she shares her life experience and know-how with peer mothers to prove that it’s possible to raise a healthy family with meager means. With the help of community health agents and volunteers, she is empowered to lead monthly gatherings where mothers talk about good child care practices, how to prepare balanced meals with locally available food, and the importance of taking children for regular health check-ups and have their growth measured.

Through this approach, fathers and older women in the community also influence the behavior of new mothers.  Fathers learn about their role in child-rearing during all-male get-togethers which take place at the local mosque, for example. Older women, or “godmothers,” are drawn in to guide and give advice to each couple through pregnancy and the child’s early years.

This model is a complete paradigm shift for Djibouti as it encourages greater community engagement in health.  Instead of receiving passive aid, communities are asked to take an active role in healthy child-rearing, breaking existing service provision silos to compel the health, social and family promotion sectors to work together.

In a context where there is a dire shortage of health professionals, the program is building on existing resources to extend maternal and child services at a very low cost. Families are given the means to keep their children healthy rather than receiving help once their child is already malnourished.

Myths about child feeding continued to be debated in the Quartier Moustiquaire, and mothers enthusiastically welcomed the “Shining Mother” model. As smiling children waved “goodbye,” I kept thinking that health policies and interventions need to give more emphasis to preventive health services. Poor communities can take the lead.

With so much social unrest in today’s world, more people are demanding a higher degree of engagement and empowerment to lead a healthier, more productive life. Once achieved, communities will reach a tipping point where a healthy, well-nourished child is the norm rather than the exception.

Nutrition and the World Bank

Reproductive Health and the World Bank

Video: How one baby's safe birth is the result of strong health systems

[1] This approach, known as “positive deviance,” has proven successful in more than 40 countries, notably to reduce anemia and low birth weight in volatile countries such as Guinea, Sierra Leone and Madagascar. The Djibouti program is based on a model developed by Helen Keller International. I am so excited by this work. We can do this in America as well. Working from this strengths based approach is more of what we need to be doing. Peers as is seen with the Breast Feeding Peer Counseling program really can make a positive impact on lives. Thank you for sharing.