Fighting Malaria and Reducing Child Mortality by a Factor of Ten 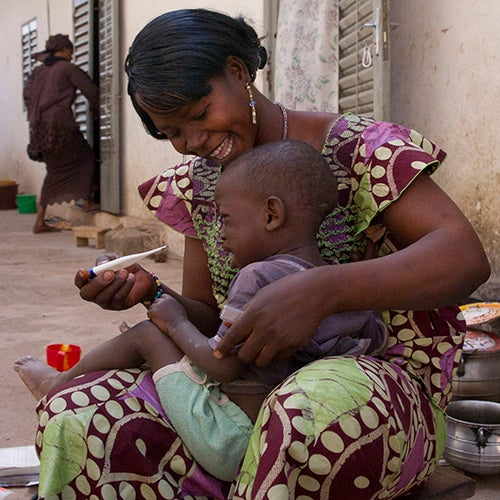 Mohammad, a three-year-old boy, lives in Yirimadjo, a community in Mali. A few weeks ago he woke up feeling ill with a high fever. That same morning, Kumba, a community health worker with the nongovernmental organization Muso, visited his family’s home during her daily door-to-door active case-finding visits. On discovering that the child had a fever, she administered a rapid diagnostic test for malaria, and he tested positive.

Kumba administered free Artemisinin-Based Combination Therapy on the spot, counseling Mohammad’s mother on how to take the oral pills the following two days. Mohammad was able to start curative treatment for malaria within four hours of falling ill. Kumba visited him the next day, and the day after that, to make sure he was taking his medication and improving.

Because most children who die from malaria are killed within 48 hours of symptom onset, speed matters in providing treatment. Mohammad’s treatment was more effective and less expensive than might have been the case if he had started treatment at a later, more severe stage. And early, proactive health care may have saved Mohammad’s life.

Roughly 3.3 billion people, or half of the world’s population, are vulnerable to malaria. Every year, some 216 million cases of malaria occur, and 665,000 people die from those episodes. Many of those deaths occur among children under five. More generally, more than 6 million children under five die every year worldwide from malaria and other curable diseases. Many of these illnesses can easily be prevented through simple tools such as bed nets or easily treated by oral medications at home if caught early.

Muso is on the frontlines of providing timely, proactive health care to poor, hard-to-reach populations in Mali, said Dr. Ari Johnson, co-founder of Muso, at a recent World Bank seminar, and thus is effective in reducing malaria deaths.

The group works in communities through a four-step approach. The first step consists of mobilizing the existing health care delivery system. This includes selecting, training, employing and supervising local individuals who go door-to-door and identify children sick with malaria and other illnesses. These community health workers diagnose malaria in the household and treat simple cases. When care is needed from a doctor, they refer patients to government health centers.

The second phase consists of removing barriers that prevent people from accessing care when needed. As in Mohammad's parents' case, most families in the regions covered by Muso are poor and do not have enough money to pay for hospital fees.  In addition, many are not able to get to the hospital in time for treatment.

Even when families can scrape enough money together to go to the hospital, they fear they will be diagnosed with an illness or disease which would cost a lot of money for medication. By eliminating point-of-care user fees, Muso ensures that even the poorest can benefit from life-saving comprehensive and universal care, whether at home, in community health centers, or in referral hospitals.

The third step consists of creating rapid referral networks by training communities in identifying health risks, prioritizing rapid treatment, and navigating the health system. These networks are essential for community organizers, religious leaders, and educators to help families in need and bring children and adults suffering from malaria to community health workers or to centers where care is provided.

The fourth, and final, step consists of clinical capacity building. As Muso systematically removes access barriers to achieve universal health coverage, it also reinforces the ability of the public sector to provide quality care to its patients. This includes expanding infrastructure and training providers.

How do we know that Muso is successful? A study recently published in PLoS ONE documents a ten-fold reduction in child mortality in Yirimadjo, Mali, after the launch of the Muso model.

At baseline, the child mortality rate was 15.5%. After three years, it plummeted to 1.7%. During the same period, the study documented  a ten-fold increase in the number of patient home and clinic visits; a doubling of the rate of rapid access to malaria treatment for children in need; and a reduction by one-third in the share of children becoming sick with fever. Because the study was not based on a randomized controlled trial, but on repeated cross-sections in Muso's area of intervention, it is important to exercise caution in assigning causality. Nevertheless, the results are very encouraging.

Note: This blog benefitted from substantial inputs and comments from Ari Johnson – including for Mohammad’s story – and is adapted from a section of a 2014 Palgrave Macmillan book on Rotary by Divya, Naina, and Quentin Wodon. The book featured Muso because it received support from several Rotary clubs. This includes a recently approved global grant from the Rotary Foundation thanks especially to Maria Nelly Pavisich from the Rotary club of Washington, DC. A standing ovation to MUSO for these outstanding results, on behalf of Rotary International (www.rotary.org), The Rotary Foundation and the wide network of Rotarians across the world (Mali, USA, Canada, United Kingdom, Germany and Hong Kong) supporting MUSO's work through humanitarian grants on the fight against malaria and improving child health and survival in Mali.
https://www.facebook.com/ThriveForFiveMali?ref=hl

Nice workdone processed by Proactive healthcare to poor ''MUSO.''I thanks to Hon'ble Mr. Ari johnson.
Sir, when MUSO healthcare knocking in India, here lots of poppulation of poors are suffering from Malayria and most of them are lost his/her life...so, please take steps in India as a humanity, I welcomes MUSO by heart and wishing better performances in future around whole world